Four popular summer festivals have made the decision not to host their events in Churchill Square this summer, amid a number of ongoing construction projects.
Apr 17, 2019 3:45 PM By: Global News 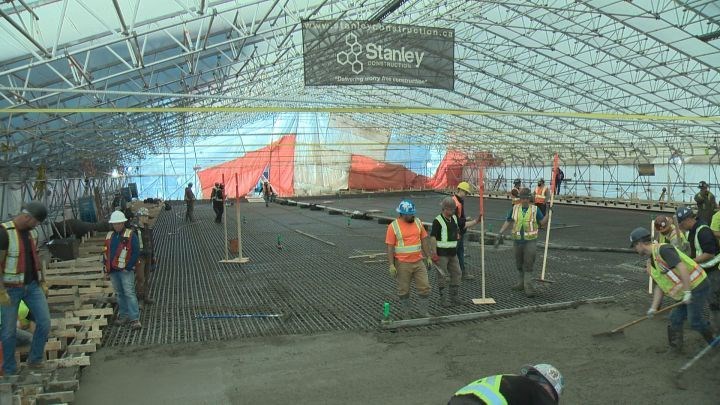 Four popular summer festivals have made the decision not to host their events in Churchill Square this summer, amid a number of ongoing construction projects.

The City of Edmonton updated its progress on the City Hall wading pool project Wednesday morning. Eugene Gyorfi, program manager for the civic precinct, said work on the fountain and wading pool remains on schedule, hitting a “major milestone” in the project Wednesday.

“We have a continuous pour of the fountain slab, it’s going to last about 12 hours. We’ve got a concrete truck coming every 20 minutes. We’ll be pouring about 290,000 litres of concrete. That’s about 75,000 milk jugs of concrete,” he explained.

The nearly 12-hour concrete work will form the base of the new look for the fountain outside City Hall. The makeover for the city’s iconic fountain was approved last year and includes resurfacing the fountain pool and surrounding deck. The water depth will reduced from 40 cm to 15 cm.

The changes were mandated by Alberta Health Services, which had concerns about water flow.

The ongoing work means four mainstay Edmonton summer festivals that usually set up shop in the square will have to once again relocate. The affected festivals are Taste of Edmonton, Edmonton Street Performers Festival, Cariwest Festival and The Works, Gyorfi said.

However, he added this isn’t an unplanned adjustment and the city has been in constant communication with festival organizers.

“We’ve been working with them since last fall to work through the aggregate of projects in and around the civic precincts,” he said.

“There are about 23 projects that are being developed within a couple city blocks of city hall here. So we informed them of the status of the various projects — Milner library upgrade, this project, law courts, Winspear expansion, LRT construction — made them aware of what the condition of the site would be, and sort of worked with them to give them the option on whether they wanted to return to Churchill Square for the summer.

“They self-selected to stay in their alternate locations for one more year… they made the choice themselves.”

The work on the city hall fountain is expected to be complete by the summer, although an exact date was not released on Wednesday.

Taste of Edmonton will be held in Capital Plaza from July 18-28.

The Edmonton Street Performers Festival will be held at Dr. Wilbert McIntyre Park in Old Strathcona from July 5-14.

Cariwest Festival will be held downtown from Aug. 9-11.

The Works Art and Design Festival will be held from June 21 – July 3.