London to mark completion of Dundas Place with bricklaying ceremony

The City of London will be marking the completion of Dundas Place with a bricklaying ceremony on Monday. Laying the final brick is Mayor Ed Holder. “I’m thinking of 1885 when the president of CP Rail laid the last spike in the railroad.
Dec 9, 2019 8:00 AM By: Global News 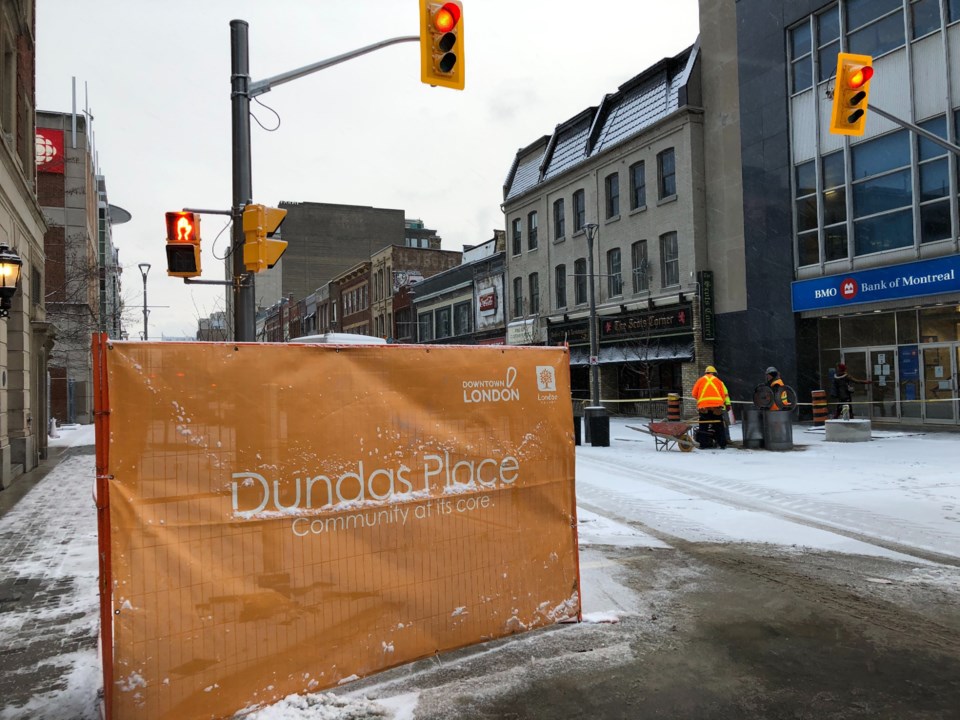 The City of London will be marking the completion of Dundas Place with a bricklaying ceremony on Monday.

“I’m thinking of 1885 when the president of CP Rail laid the last spike in the railroad. It feels a bit like that,” Holder said.

“In such quick order, we can turn a very mobile street, which is primarily used for cars, [into] a walking street and a people place,” Holder said when asked what he’s most looking forward to in the city’s first-ever flex street.

Dundas Place has already shown its adaptability with a handful of events over the summer, including a viewing party for the Toronto Raptors’ successful playoff run.

Holder added that the project’s completion is a milestone for downtown London but also equally important for Dundas Place business owners.

“It’s important for the merchants who’ve struggled through this process with construction. They understood it, [and] I think they’ve been incredibly gracious about it,” he said.

One of those merchants is Jonathon Bancroft-Snell, who owns an eponymous art gallery on Dundas Place west of Wellington Street.

“We are down considerably, however the reality is that I still believe wholeheartedly in the reason for doing it,” Bancroft-Snell said.

“I think it’s going to be better than normal.”

Similar praise was offered by Sylvia Chodas, office manager of Camera Canada at the corner of Dundas and Clarence streets.

“We understand that these upgrades needed to be done: the sewers, the rest of the underground work and the above-ground work,” Chodas said. “We’re very pleased.”

A different tone was sung by Yunis Alihi, owner for Fine Art Custom Framing on Dundas Place west of Wellington Street, a few steps away from the Jonathon Bancroft-Snell Gallery.

“If they worked 24-7, it could have been done much faster,” Alihi said.

“They spent so much money on the street… hopefully, we see people come downtown.”

Monday’s bricklaying ceremony will get underway at 2 p.m. outside the central branch of the London Public Library.

Holder will be in attendance, along with Ward 13 Coun. Arielle Kayabaga.

Thousands of Ontario renters brace for evictions as Landlord and Tenant Board reopens Tuesday
Aug 4, 2020 7:05 AM

Firefighters respond to blaze at barn in Sturgeon County
Aug 4, 2020 2:09 AM
Comments
We welcome your feedback and encourage you to share your thoughts. We ask that you be respectful of others and their points of view, refrain from personal attacks and stay on topic. To learn about our commenting policies and how we moderate, please read our Community Guidelines.