Dozens of residents gathered on a Brampton street on Wednesday to remember two young boys who were found dead in their home, gathering to light candles and to share fond memories.
Nov 13, 2019 10:55 PM By: Global News 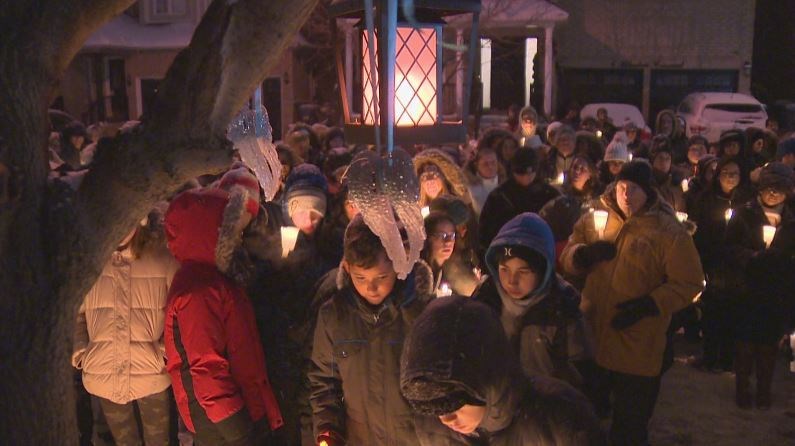 Dozens of residents gathered on a Brampton street on Wednesday to remember two young boys who were found dead in their home, gathering to light candles and to share fond memories.

“It didn’t cross my mind that it would happen … it just happened out of nowhere. I didn’t expect it — no one did,” Magda Strzelczyk, a student at St. Bonaventure Catholic Elementary School, told reporters after the vigil Wednesday evening.

Emergency crews responded to a medical assistance call at a residence on Hiberton Crescent, near Creditview Road and Sandalwood Parkway West, at around 10:55 p.m.

READ MORE: Neighbours react to father being charged with murder after 2 sons die

Police said the father of nine-year-old Nicolas Bastidas and his 12-year-old brother Jonathan Bastidas, 52-year-old Edwin Bastidas, was charged with two counts of first-degree murder. The charges haven’t been proven in court.

At the vigil, Megan Rodrigues, another student at St. Bonaventure Catholic Elementary School where the Bastidas brothers also attended, said she wrote a prayer in honour of Nicolas and Jonathan. She said she hasn’t been able “to get [her] head around it.”

“I really do love them a lot and I just wanted people to know they still are here, but not with us today,” Rodrigues said.

Strzelczyk said she remembers how Jonathan had a good sense of humour and how Nicolas always had a toy car, noting he “loved to play with toy cars.”

“I really do care for them,” she said.

Ahmed Abdool Hamid said he lives next to the Bastidas family home. He said he is still in shock over the incident, adding he wonders if a more cohesive community could have made a difference.

“In this country, you only know people by saying, ‘Hi,’ and, ‘Hello.’ Sometimes if you get to know them a little deeper, these things, I think, they can be prevented,” he said.

Meanwhile, a GoFundMe crowdfunding campaign was launched in support the mother of the boys, Sylvana, and her family “to help them get through this tough time of mourning.” As of Wednesday night, more than $20,000 was raised.

— With files from Jessica Patton and Albert Delitala

BC Coroners Service called to West Kelowna after body pulled from Okanagan Lake
Jul 10, 2020 12:51 AM

U.S. rejects UN expert report calling Qasem Soleimani killing ‘unlawful’
Jul 9, 2020 11:43 PM
Comments
We welcome your feedback and encourage you to share your thoughts. We ask that you be respectful of others and their points of view, refrain from personal attacks and stay on topic. To learn about our commenting policies and how we moderate, please read our Community Guidelines.