Once a month, Celina Urbanowicz goes to the Canada Border Services Agency (CBSA) — a routine check-in because she is a refugee , without legal status, facing deportation.
Jun 16, 2020 4:00 AM By: Global News 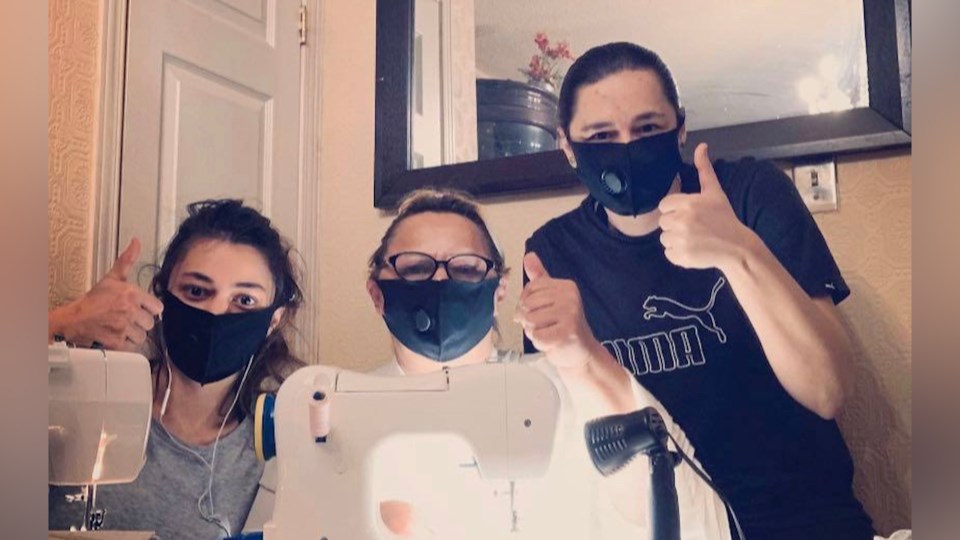 Once a month, Celina Urbanowicz goes to the Canada Border Services Agency (CBSA) — a routine check-in because she is a refugee, without legal status, facing deportation.

During the intervening days, the Urbanowicz-Hajrizi family matriarch, 61, camps out at one of her many sewing machines at home in Ottawa, churning out masks at a steady clip to be sent provincewide and hopefully help reduce the spread of the novel coronavirus.

Her children have a growing collection of photos of Urbanowicz donating at hospitals and long-term care homes, her face covered in a mask but her eyes crinkled up at the corners, indicating a smile.

Even though the CBSA has stopped deporting most people during the pandemic and Urbanowicz has one last ditch application before the government, her children’s worry never subsides; it tinges most conversations. If she is deported, they’ll be a Roma family spread over three countries and two continents — their father was deported last year to Kosovo.

“My siblings and I lost my father, my mother lost a forever longtime partner, but if we lose our mother, the anchor of the family?… We are constantly scared and worried.”

Hajrizi is hopeful the pandemic will be what the broader public needs to really put themselves in her family’s shoes, to support them.

After all, she says, “our front-line heroes are being separated and divided from their families. And they’re also living in the unknown.” Helpless, powerless, unable to fully protect the ones you love — these are just a few of the similarities Hajrizi sees.

“We have to stand united and help one another because we are obligated as human beings,” she says.

“Despite my mother’s problems, despite the hardships that she’s faced for over 23 years, she has put fellow Canadians before herself.”

Urbanowicz is under no illusion that making the masks is an alternative path to citizenship. That isn’t why she does it. Rather, she’s a deft seamstress with many sewing machines.

But Hajrizi is her mother’s fiercest advocate and thinks perhaps it is a way to remind people that even though Urbanowicz is a person without status, she is — first and foremost — a person.

READ MORE: Calls for change at refugee board after woman asked why husband didn’t ‘just kill’ her

Hajrizi tries to underscore that in everything she does, particularly now that both she and her sister Camila, 25, have been deemed eligible to begin the process to become permanent residents of Canada on humanitarian and compassionate grounds. They hope their mother will be accepted on similar grounds, but her odds are longer than theirs.

Their younger brothers, both born in Canada, have passports. Sometimes, Urbanowicz says, when she’s feeling low, one of her boys will bring their passports to her. They’ll put them on her lap or the table in front of her.

“Don’t worry,” she says they tell her. “You have two Canadian passports, you’re Canadian.”

READ MORE: What’s next for Canadian refugee policies in 2020

Hajrizi camped out in front of Prime Minister Justin Trudeau’s office for eight days last December to try to make it so — legally. For her efforts, she got bronchitis and pneumonia.

Hajrizi’s advocacy is “unbelievably forceful and persuasive,” says Cynthia Levine-Rasky, a sociology professor at Queen’s University and author of Writing the Roma.

It’s also necessary. If there is one generalization Levine-Rasky is comfortable making about Roma people, it’s that you cannot make a generalization.

“They’re tremendously diverse, like any group in diaspora,” she says. “They don’t all speak the Romani language, they have many different religions, many different identities and practices.”

The downside to that is there is no national homeland to return to, nor is there a country of origin that can advocate for them collectively, Levine-Rasky says.

“They don’t have anywhere to go… nobody to say, ‘Please speak out on our behalf.’”

This is something the Urbanowicz-Hajrizi family knows all too well.

Urbanowicz is Roma from Poland, while her husband, Ismet Hajrizi, is Muslim Roma from Serbia. When she fled her abusive first husband for Ismet, her Roma family in Poland disowned her.

The newlyweds lived in former Yugoslavia, where both Hajrizi and Camila were born. But those were turbulent, conflict-ridden years as Yugoslavia broke into Slovenia, Croatia, Bosnia and Herzegovina, Serbia and Macedonia. The family fled for Canada, arriving in Vancouver in 1997 and eventually settling in Ottawa.

Most people in Canada do not have “the slightest clue” about Roma people or anti-Roma discrimination, says Levine-Rasky, because here they can live almost anonymously, whereas in Europe they are viewed as racialized people and racism towards them is “ubiquitous.”

No matter where on the continent they are, they are “marginalized and targets of hatred, very long-standing historical, structural hatred,” she says. And while in Canada, it isn’t socially acceptable to publicly say, “I hate so-and-so group of people,” that isn’t the case in Europe for Roma people.

“In Europe, it is completely publicly acceptable to target and to publicly make claims against the Roma,” Levine-Rasky says, “whether this is denying them a job opportunity or health care or housing or education for their kids or social services, you can very easily get away with it.”

In Canada, the Urbanowicz-Hajrizi family feels safe and, until Ismet was deported, whole. But their refugee applications were denied, something Hajrizi blames on failures on the part of their legal representatives to correctly file documents on time. Immigration, Refugees and Citizenship Canada did not respond to multiple questions from Global News.

Theirs wouldn’t be the only case like that, says Sharry Aiken, a law professor at Queen’s University.

“What’s gone wrong in this case is a story that’s very common across a wide range of refugee claimants,” she says. If files aren’t submitted by a certain date, the refugee board must mark it abandoned, Aiken says, which leaves people in a “very difficult” situation with very few good options for staying in Canada. Immigration, Refugees and Citizenship Canada did not respond to multiple questions from Global News.

One option is the humanitarian and compassionate grounds route, which Hajrizi and her sister Camila feel fortunate to have been approved for. Their mother wasn’t as lucky.

That should concern Canadians, Aiken says, because it could mean huge consequences for families who arrive, often traumatized, with little money and — in Urbanowicz’s case — very little English, and put their trust in the wrong lawyer.

While the asylum process itself is pretty good, she says, the “so-called remedies” for those who’ve had their process mishandled are not nearly as robust:

“If the person you retain to represent you in an asylum claim messes up, you lose any prospect of remaining in the country.”

Immigration, Refugees and Citizenship Canada did not respond to multiple questions from Global News.

With no good recourse, Urbanowicz says her children are struggling to cope. They’re adults now — her youngest is 20 — but she’s a mom and moms worry.

Her kids need her love, support and motherly reminders to be good people and good citizens and kind above all else — to live alone, an ocean away from her children?

“I have no words,” Urbanowicz says.

“I don’t know what to do; it’s very difficult. I don’t have the words to explain it to you.”

Think about the logistics for a moment, Aiken says:

Their father is gone, deported to Kosovo although his children say he’s from Serbia. Mother has a suitcase packed by the door in anticipation of being deported back to Poland. Their children, adults and teenagers on the cusp, will remain in Canada. One family, three countries.

“I don’t even need to know anything more about the case to say that’s a problem,” Aiken says.

“It’s clearly not in the best interest of the children of the family to deport their parents.”

Whatever the future, Urbanowicz keeps making her masks. Her daughters do what they can to help, soaking up their time with their mother.

“We hope that Canada will embrace my mother the way my mother embraced Canada,” says Camila, a little younger and a little more soft-spoken than her sister.

“We hope that Canada will stand behind her and support her in what she’s doing. We have a lot of faith.”

What Hajrizi wants now is what she wanted when she stood outside the prime minister’s office for more than a week in the cold Ottawa winter: a few moments of his time.

READ MORE: UN to suspend refugee resettlement because of coronavirus

She’s convinced she can make him understand if he hears her, convinced he will help keep her family from splintering further.

“We’re so desperate to keep our mother here, our only parent here,” Hajrizi says. She’ll take anything, even 10 minutes over Zoom.

READ MORE: Silenced by fear of deportation, why a woman who survived attempted murder is speaking out

Man drowns at Manitoba quarry near Great Falls Dam
Jul 13, 2020 2:31 PM
Comments
We welcome your feedback and encourage you to share your thoughts. We ask that you be respectful of others and their points of view, refrain from personal attacks and stay on topic. To learn about our commenting policies and how we moderate, please read our Community Guidelines.