The organizers of a new photo exhibit north of Edmonton are asking the public to contact them if they have any clues about the identity of a young Indigenous boy pictured in an 80-year-old photo.
Feb 27, 2019 9:31 PM By: Global News 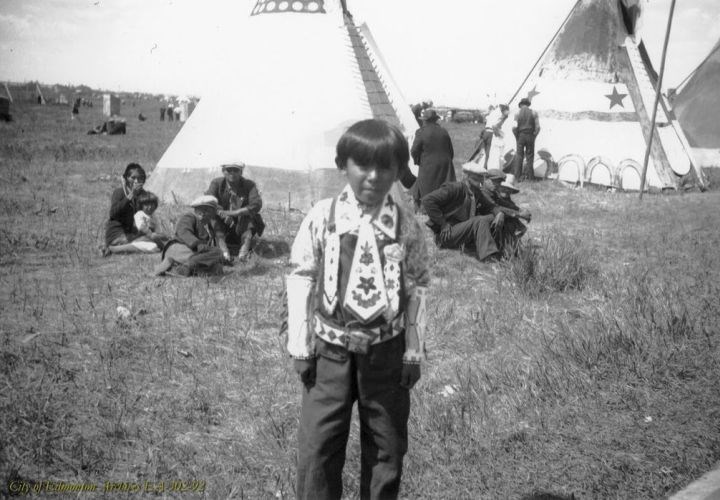 The organizers of a new photo exhibit north of Edmonton are asking the public to contact them if they have any clues about the identity of a young Indigenous boy pictured in an 80-year-old photo.

“He is very stoic in his look but I also see that he’s also very proud,” Miranda Jimmy told Global News on Wednesday. Jimmy, who’s with an organization called RISE (Reconciliation in Solidarity Edmonton), is one of the people behind the Reconciling Edmonton exhibit at the Art Gallery of St. Albert.

“He’s dressed very differently than the other men and the woman and the other child in the background,” Jimmy said of the unidentified boy.

“He’s dressed to the nines and ready for this big event.”

Can you help solve this #yeg #archives mystery – who is this #FirstNations boy? Dressed in his 1939 finest, we'd like to know what he remembers from this moment. Tune into @GlobalEdmonton at 5PM tomorrow or come see the photo for yourself at @ArtGalleryStAlb until March 30 pic.twitter.com/H54gTNolR6

The photo of the boy was taken near what is now Kingsway in Edmonton as King George VI and Queen Elizabeth were visiting the city.

READ MORE: Why is Kingsway the only Edmonton road without an ‘avenue,’ ‘street’ or ‘boulevard’?

Watch below: (From 2017) Lauren Fink in the Global 1 Helicopter gives us a brief history as to why Kingsway doesn’t have an avenue, street or boulevard.

The St. Albert exhibit shines a light on the archival process for historical photos in Canada, according to Jimmy. She said often times the photographer is recorded and remembered, but not always their subjects.

“In the archives, that is the norm, where often times it is settlers that have the negatives and the photos that are donated without any context for what’s in the photos,” she said. “There wasn’t necessarily permission for the photos to be taken and what they chose to capture in the records that were shared with the photos is often missing a lot of information.”

READ MORE: Removal of hearts a miscommunication the City of Edmonton ‘deeply regrets’

Jimmy said she and others involved with the exhibit have heard that the clothing the boy is wearing may be Cree but they haven’t been able to narrow down where he’s from yet. She said his style of dress wasn’t uncommon for the time.

“In the time period, there was often a melding of First Nations traditional crafts, like beadwork, into clothing of the day. So if you see he’s kind of wearing a collar and a tie and vest that’s all beaded.”

Jimmy said RISE wants to hear from anyone who may be able to tell them more about the photo in question that could lead to them identifying the boy. She said things like information on the teepee in the background of the photo or knowledge of who was there that day may help. She said if the boy in the picture is still alive, he would be in his eighties but may have some interesting stories to tell of the royal visit.

“The selected images come from the St. Albert Archives, and they depict St. Albert’s Indigenous, Métis and settler peoples — past and present — reminding us that we are all treaty people,” a description of the exhibit reads. “Archival images generously provided by the Musée Heritage Museum.”

RISE was formed in 2015 to mark the one-year anniversary of the Truth and Reconciliation Commission’s national event in Alberta’s capital. The group says it aims to work on moving forward with reconciliation by raising awareness about the impact of residential schools and about Indigenous culture.