City of Lethbridge shows off Phase 2 of ATB Centre

On Wednesday, the City of Lethbridge provided a sneak peek of what people can expect to see when Lethbridge’s ATB Centre opens its doors during Phase 2 of the leisure centre project.
Feb 27, 2019 9:32 PM By: Global News 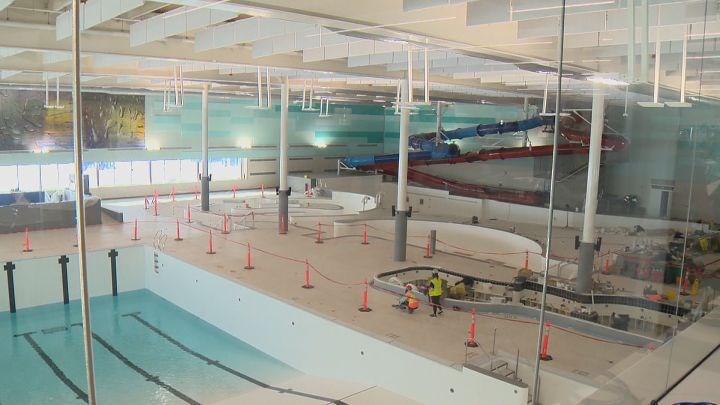 On Wednesday, the City of Lethbridge provided a sneak peek of what people can expect to see when Lethbridge’s ATB Centre opens its doors during Phase 2 of the leisure centre project.

Phase 2 of the ATB Centre, which is nearing completion, is going to be the future home of the Cor Van Raay YMCA. Van Raay donated $3.75 million towards the project and was able to see what his donation helped build on Wednesday.

“I’m totally impressed,” Van Raay said. “(Though) I’m not sure how I’m going to find my way around here when I come to do exercises.”

The aquatics centre features four pools, a steam room and a hot tub, along with a number of other amenities.

For workout warriors, there are two fitness centres that sit above the pool, totalling around 30,000 square feet, along with a running track. Below the track, a field house features a number of courts for a variety of different sports.

The City of Lethbridge sees the facility filling gaps in service for the community.

“Lethbridge is one of the few cities that didn’t have a leisure centre so it’s tremendous that we will now have one,” Lethbridge Mayor Chris Spearman said. “I think it’s going to be a great centre point for west Lethbridge, but I think it’s also going to entice people to come from the other side of the river to west Lethbridge as well.”

To support the new facility, the YMCA will be increasing its staff to around 225 people, which the organization says is close to five times what it has at its current facility. The YMCA also believes the move to the ATB Centre will lead to a surge in membership beyond the 2,500 users in its downtown building.

“We’re hoping to at least see, I would think, 5,000 within a very short period of time,” YMCA Lethbridge board chair Stephen Mogden said. “Really pie-in-the-sky, best-case scenario for us, we’d really like to see a 10,000-member mark.”

Progress has been made and portions of Phase 2 look to be complete, but the city isn’t ready to announce when the facility will open to the public.

“We really can’t set a date,” project co-ordinator Ashley Matthews said. “We don’t want to give anyone any false hope that it’s going to open on a certain date and then have to cancel that so right now we’re just waiting. It will probably be another month before we can actually set a date.”