Jon Steingard, the frontman of Christian rock group Hawk Nelson, has revealed that “he no longer believes in God” after spending his life as a devout Christian.
May 28, 2020 12:43 PM By: Global News 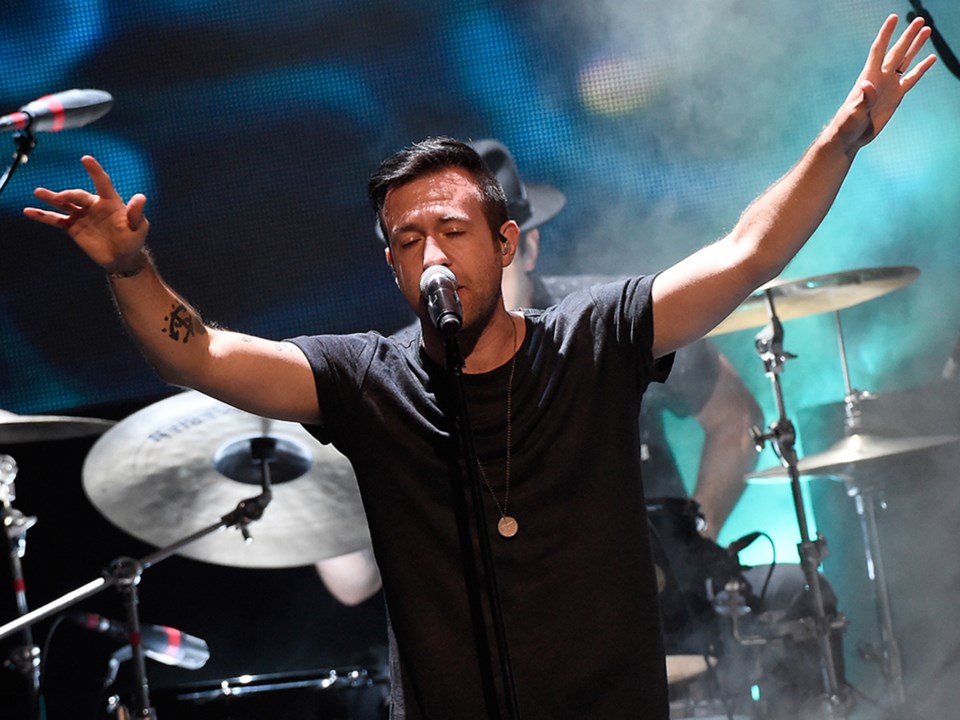 Jon Steingard, the frontman of Christian rock group Hawk Nelson, has revealed that “he no longer believes in God” after spending his life as a devout Christian.

The Canadian musician went public with the revelation last week in a lengthy Instagram post admitting that he’d “been terrified” for a long time about being “transparent” with his fans about losing faith in his religion.

“It feels like it’s time for me to be honest,” he wrote in the caption. “I hope this is not the end of the conversation, but the beginning. I hope this is encouraging to people who might feel the same but are as afraid to speak as I am.”

He says, “After growing up in a Christian home, being a pastor’s kid, playing and singing in a Christian band, and having the word ‘Christian’ in front of most of the things in my life — I am now finding that I no longer believe in God.”

I’ve been terrified to post this for a while – but it feels like it’s time for me to be honest. I hope this is not the end of the conversation, but the beginning. I hope this is encouraging to people who might feel the same but are as afraid to speak as I am. I want to be open. I want to be transparent with you all – and also open to having my heart changed in the future. I am not looking for a debate at all – just a chance to share my story in the hopes some good can come from it. I love you all.

“I still find myself wanting to soften that statement by wording it differently or less specifically,” he added. “But it wouldn’t be as true.”

After revealing that he had been holding onto the feeling for “several years,” Steinberg vaguely addressed what that would mean for the Grammy Award-nominated band with whom he’s spent the last 16 years of his life.

He wrote: “If you’re someone who follows me because of Hawk Nelson, and my involvement in Christian music, you are probably thinking, ‘Wait, were you lying to me the whole time? Were you just pretending to be a Christian? What about all those songs you wrote? Did you mean those?’”

“The short answer is that I was not lying,” he said. “I did believe those things at the time.”

Fruthermore, Steinberg hinted that he may leave the band in the near future.

“While I know I can no longer stand on stage and in good conscience sing songs like Drops in the Ocean, I no longer fear losing my place in Christian music,” he said. “I know this means giving it up voluntarily.”

Many of his longtime fans took to the comment section on Instagram offering their “prayers” for his new “journey,” while others pleaded for him to stop “believing lies.”

Here’s what some of those users had to say:

So I heard the tragic news that you surrendered to the devil. It was bad enough you sold out. What is so evil is that you betrayed all those who loved you. Look how many souls may be lost due to your selfishness.

Sad and unfortunate to hear about fellow San Diegan and musician Jon Steingard of the band Hawk Nelson announcing he no longer believes in God. As with many who have fallen away, he cites God allowing evil to occur in this world as his primary reason.

Please don't lose your faith in God. You've been an effective channel of hope to millions so let God keep using you. Nothing matters more.

@jonsteingard So unfortunate to see you become one of the world. You bought into the lies of the world. You sought out sinners to relate to your faith and ultimately chose your path. Openly worshiping is “Crazy” because everyone now is against worshiping god. pic.twitter.com/4ecZSOJves

Bummer about that Hawk Nelson guy.

I'll be praying for him.

Are you denouncing God because his word goes against your lifestyle choices? What was it that convinced you that the whole God thing was a scam and so unbelievable?

One Instagram user commented: “I’m going to speak to you as a Marine. Son, stop believing lies and get back into the world. Writing letters and post it notes on social media doesn’t get you anywhere. Take it before the throne!”

Another described the news as “a very jagged pill for many {Hawk Nelson fans) to swallow.”

Despite the mass wave of criticism, Steinberg was also met with many supportive comments across social media. Many said that it wouldn’t change how they felt about him or his music.

“Jesus Loves you! No judgment here,” wrote one Instagram user. “I have dealt with my own hurts within the confines of religion. I sincerely hope you fine a true relationship with your Savior,” they added.

Here’s what some other fans had to say via Twitter:

It’s insane to me how many evangelicals read Jon Steingard’s Instagram post and IMMEDIATELY, WITHOUT FLINCHING jumped to “well then your faith was never real to begin with” or even worse “you were the seed that was choked out by weeds.” That’s disgusting and part of the problem.

feeling this freedom all over again today. this is the first bit from a post by @jonsteingard of Hawk Nelson. once again, this is exactly my story. if you’ve been feeling decades of internal dissonance like me, this was how i started alleviating it. pic.twitter.com/awGcaDF8jp

Jon Steingard's insta post yesterday was great and Christians would do well to actually take his concerns seriously instead of just brushing them under the rug.

“So excited for you, Jon! And extremely inspired” wrote another on Instagram. “Even as ‘non-believers’ we have this preconceived stereotype put on us most of that time that we’re bad people or that we don’t ask all the right questions.”

They concluded: “But you’ve shown nothing but kindness, and you’re being 1000 per cent honest and open.”

READ MORE: John Boyega speaks out about racism after George Floyd’s death: ‘I hate racists with a passion’

After being faced with a mix of backlash and “overwhelming” support, Steinberg returned to Instagram on Wednesday with a follow-up post entitled “What now?” in which he answered some of the questions he has been asked since going public with the “emotional rollercoaster.”

He admitted that while he is no longer a Christian — “and not an atheist” — he is now agnostic.

“Labels like that feel kind of icky,” Steinberg said. “I certainly couldn’t say for certain that God isn’t there. I would prefer it if he was,” he added.

Despite stepping away from Christianity, however, Steingard said he was open to “having (his) heart changed in the future.”

(Swipe to read) Thank you all for the love. I feel it more than ever.

On being asked what he hoped to “accomplish” by going public, Steinberg said that he simply got tired of “staying silent” and holding onto the fear of losing his “friends, community and livelihood.”

He continued: “You have to know that after 15 years in a Christian band, everything in my life was pretty public, including my faith. As my views changed, I became quieter, not wanting to rock the boat. … I felt that by staying silent, I’d be participating in a culture that says it’s not OK to question (or) doubt.”

On Wednesday morning, the other members of Hawk Nelson, Daniel Biro, Micah Kuiper and David Niacaris, took to Instagram to pay their respects for Steinberg’s “innermost feelings” and commend him for his “faith journey.”

The lengthy post reads: “Our mission as Hawk Nelson has always been to inspire and encourage all people with the truth that God is for them and not against them. … Now we turn that truth towards one of our own.”

“God is still for Jon and he still matters,” added the Live Like You’re Loved rockers. “Why? Because that truth doesn’t change just because we question it.”

Jon Steingard One of our best friends, one with whom we have walked, worked and lived alongside for 20 + years revealed some of his innermost feelings on his faith journey this past week. Our mission as Hawk Nelson has always been to inspire and encourage all people with the truth that God is FOR them and not against them. In that message’s most simple and purest form, that THEY matter. So now we turn that truth towards one of our own. That God is still FOR Jon & he still matters. Why? Because that truth doesn’t change just because we question it. How we treat one another when they are at a different stage in their journey based on their life experiences is part of a bigger conversation.  We are called to love one another unconditionally, as God loves us. We should also encourage and challenge one another in our Faith, seeking truth. Are we the authors of our own salvation and eternity? Has God provided a way to salvation for us through Jesus?  These are the questions that we each must ask and explore. In the Bible (Romans 8:38) Paul writes, “… I am convinced that nothing can separate us from God’s love… neither our fears for today nor our worries about tomorrow – not even the powers of hell can separate us from God’s love. No power in the sky above or in the earth below – indeed, nothing in all creation will ever be able to separate us from the love of God that is revealed in Christ Jesus our Lord.” The same Lord is Lord of all, and gives richly to all who call on Him, for, “Everyone who calls on the name of the Lord will be saved.” Ever thankful and grateful for how God has used this band, the music and the relationships and how He continues to do so. Daniel, Micah, David.

Steinberg joined Hawk Nelson in 2004, at the age of 20. He served as their guitarist until taking over as frontman after the departure Jason Dunn in 2012.

In their two-decade spanning career, the Peterborough, Ont.-based band has released eight studio albums, including their latest, and potentially final: 2018’s Miracles.