Calgary to limit vehicles on Stephen Avenue to make room for pedestrians, patios

The City of Calgary said it will be doing its part to help local businesses serve patrons amid the COVID-19 pandemic by restricting vehicle access to one of the city’s popular downtown streets.
May 28, 2020 4:45 PM By: Global News 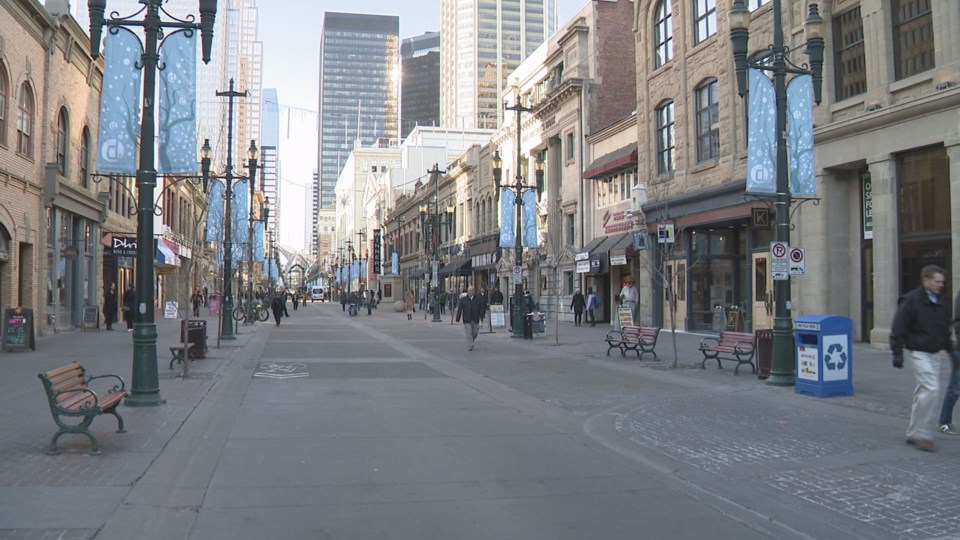 The City of Calgary said it will be doing its part to help local businesses serve patrons amid the COVID-19 pandemic by restricting vehicle access to one of the city’s popular downtown streets.

“Tomorrow after 11 a.m., only pedestrians and cyclists will be allowed on Stephen Ave,” Nenshi said.

“This is not a street festival and this is not a summer party on Stephen Ave… What this is about is supporting local businesses.”

READ MORE: Some Calgary restaurants may not open for dine-in, despite provincial green light

Nenshi said vehicles will be allowed on the street between the hours of 6 a.m. and 11 a.m., to allow for deliveries and important traffic, however past 11 a.m., no cars will be permitted on the road.

The road closure will allow restaurants to extend their patios in order to serve more patrons, Nenshi said.

“We’re making it easier to stretch out your patio,” he said. “On Stephen Ave., we’re going to be pushing the patios out towards the road.”

Calgary Emergency Management Agency (CEMA) deputy chief, Sue Henry, said the city has also made it easier for businesses to get the necessary permits for their patio expansions.

All fees for the temporary permission have been waived, and Henry said the city’s planning department is looking to help businesses obtain the proper approvals as quickly as possible.

“To date, we have had 45 applications for temporary outdoor patios, — these have been completed. 34 applications are being processed and six temporary patios are already installed and operating.”

The decision to close Stephen Avenue to vehicle traffic was made following a survey of business owners in the area.

“The Calgary downtown association did a really good job on surveying their members and they found that the vast majority wanted to try this,” Nenshi said.

“Now I know the businesses are behind it, I’m excited to try the experiment.”

Henry also noted that the city’s temporary 30-minute curbside pickup and free parking zones will come to an end on June 1.

A change in the scheduled reopening date for the city’s playgrounds was also announced on Thursday.

“As of tomorrow Friday, May 29, playgrounds will be eligible to operate,” Henry said

The city originally planned on reopening playgrounds on June 1.

Henry also added that officials will be “lightly” inspecting playgrounds upon reopening to ensure the public’s safety. She noted that parents should also stay vigilant when letting their children use the facilities.

Henry said the public should wash and sanitize their hands before and after using the playgrounds and limit contact with anyone outside of their family.

Dad, daughter injured in Calgary motorcycle crash
Jul 15, 2020 12:53 AM
Comments
We welcome your feedback and encourage you to share your thoughts. We ask that you be respectful of others and their points of view, refrain from personal attacks and stay on topic. To learn about our commenting policies and how we moderate, please read our Community Guidelines.