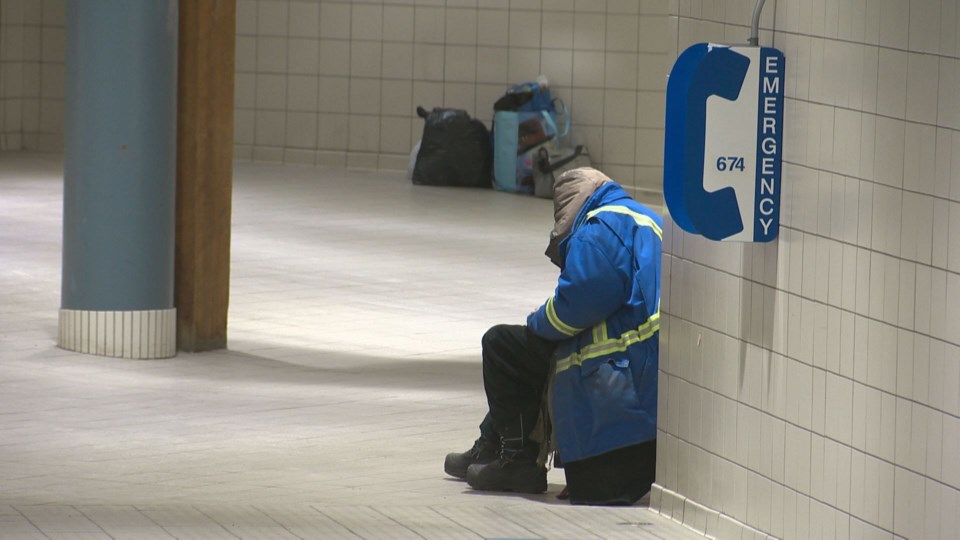 Forecasts show the Edmonton area will plunge into a deep freeze this week, dipping from about -20 C on Tuesday to -28 C on Thursday.

Last year during a cold snap, the city opened up LRT stations overnight, but Global News has learned that will not happen in the coming days.

The city says it is working to secure another spot for those struggling with homelessness but that it will not include shelter in LRT stations.

“That’s a strong word,” he said on Tuesday. “When we know for certain that they’re not going to go to the homeless shelters — which should be the number one location for them to go to, and we need to do a better job to connect the homeless population with the services that are available — but that’s a conversation to be had not during a time of crisis.

“As the weather begins to plunge now, it’s a different conversation. So I think that not utilizing this infrastructure could be seen as cruel.”

However, there were reports of violence in LRT stations, which were not equipped with adequate services or trained workers.

Dziadyk says despite those problems, it still makes sense and he’s going to push to keep LRT stations open.

“I know the city is hesitant to open up the LRT during times of extreme cold, but I think that’s the wrong approach. After a little bit of pressure, we were able to open it up last year and I think that should be an ongoing approach until we have something more permanent in place to deal with these times of crises.”

“It’s existing infrastructure that we have and it’s located right where the homeless population is.”

He recognizes using LRT stations as shelters is not the ideal solution.

“The ideal location for the homeless to be in during extreme cold is in the homeless shelter and I do understand that there’s often extra beds available. But, for whatever reason, segments of the homeless population will not go into our homeless shelters. So it’s incumbent upon the city to protect their most vulnerable.”

Global News has learned councillors should be receiving a memo later Tuesday, outlining efforts to secure a large space as part of the extreme cold weather plan.

An announcement about the city’s Winter Emergency Response plan is scheduled for 2:30 p.m. Tuesday. Homeward Trust’s CEO and the city’s director of housing and homelessness will be speaking.

“If it can be fitted up in a way to meet the needs of the homeless population and the city of Edmonton, then it could be a good thing,” Dziadyk said, stressing he had not yet seen the memo.

“We are a winter city and I would expect that the solutions to be brought forward would, one: look to utilize existing infrastructure and two: sort of be the path of least resistance that would get the job done.”

Being homeless during freezing temps can be life threatening.

At night the LRT stations are not in use and I'm in favour of having stations stay open to provide shelter.

The preferred solution is for those in need to be connected with existing services.

Last year, Homeward Trust was concerned that opening the LRT stations sometimes but not always would create inconsistency of service, which could be problematic.

“If individuals think that LRT is a shelter option in our community and it’s not next week but it was this week — we can contribute to further risk by having things that are available some days and not on others,” CEO Susan McGee said.

In winter 2018, even during the coldest periods, shelter capacity in Edmonton didn’t go over 75 per cent, Homeward Trust said.

“Shelter capacity matters, as well as weather, in terms of getting people to the shelter,” McGee said. “In the shelter they can get food, bedding, adequate supports. That’s just not going to be available at the same level and with the same training and response, in terms of staff, at an LRT at any time.”