100 years after the anti-Chinese riots in Halifax

Only months after the conclusion of the First World War, an unruly and xenophobic mob made their way through the streets of Halifax, damaging Chinese-owned businesses on the city’s most populous streets.
0
Feb 18, 2019 11:43 AM By: Global News 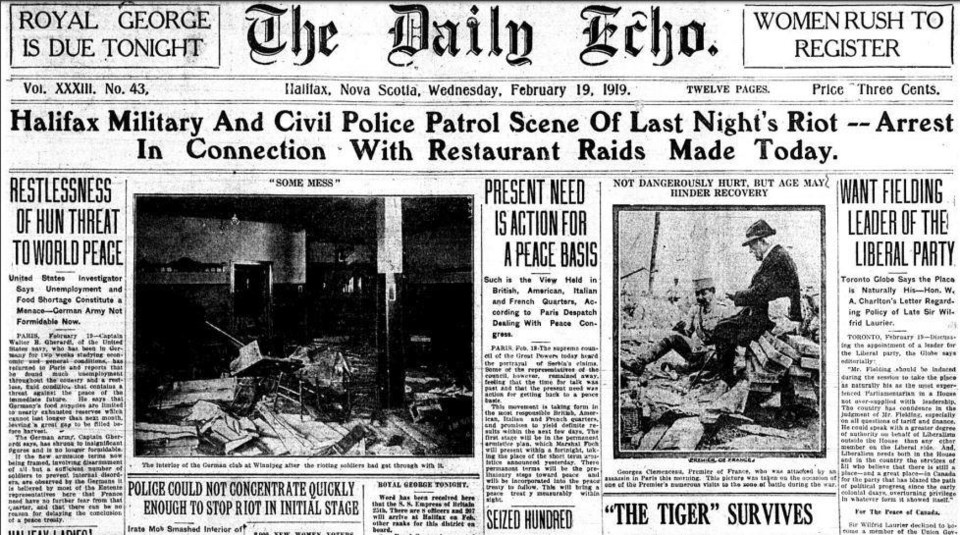 Only months after the conclusion of the First World War, an unruly and xenophobic mob made their way through the streets of Halifax, damaging Chinese-owned businesses on the city’s most populous streets.

In the days after, headlines of the city’s major papers blared “Rioters Wreck Six Chinese Restaurants” and “Over a Hundred are in Hospital as Result of Rioting.”

READ MORE: A look inside Canada’s oldest and smallest legislature on its 200th anniversary

This week marks the 100th anniversary of the anti-Chinese riots of 1919, an event that saw “several thousand” soldiers and civilians destroy Chinese-owned business along Gottingen, Buckingham and Barrington streets. According to a headline at the time from the Evening Mail, the riots caused tens of thousands of dollars in damage and sent over 100 people to the hospital.

Through a combination of contemporary reporting and internal city documents, Global News takes you back to Feb. 18, 1919 and Feb 19, 1919, the two nights that saw rioters take to the streets.

The incident began at the Crown Cafe on Gottingen Street, a shop that no longer exists. It would have sat directly across the street from the Global Halifax studio at what is now an empty lot at 2115 Gottingen Street.

According to an account by The Evening Mail, Thomas Andrews, a soldier who had returned from the First World War, entered the cafe at 11 p.m. on Feb. 18, 1919, while partially drunk and ordered a “hearty meal.”

But when Andrews was asked to pay, he “refused and abused” the unnamed Chinese owner of the establishment.

The owner asked Andrews to leave even if he didn’t pay but once again the soldier refused, instead choosing to ask for a pack of cigarettes.

Cigarettes were 15 cents — but Andrews only handed over 10 cents and refused to pay any more. The soldier quickly turned off the lights, grabbed the cash register and allegedly stole $75 from inside of it before throwing it through the window.

WATCH: A look inside Canada’s oldest and smallest legislature on its 200th anniversary

The police soon arrived and asked Andrews and several of his friends to leave the cafe. They did but later returned, amassing a crowd with a rumour that a soldier has been brutally assaulted by a Chinese man.

That was not true, but the angry mob nonetheless “proceeded to clean up the place,” according to the Daily Echo, before turning their attention to five Chinese restaurants all located along Gottingen, Brunswick, and Barrington streets.

The mob destroyed ““everything that could be smashed, throwing chairs, cash registers, and stoves through the windows into the street, pulling curtains down and breaking the counters” causing an estimated $10,000 worth of damage in the span of a few hours.

In total, $375 was stolen from the cafes along with a typewriter, tobacco, cigars, and cigarettes.

The mob was eventually quieted and Andrews was arrested. But his arrest wouldn’t stop what would come the following evening, which saw an estimated “several thousand” soldiers and civilians take to the street.

The second night of rioting

Rioting on Feb. 19 began at approximately 10 p.m., with the Crown Cafe being targeted again. The windows of the cafe, destroyed by the previous night’s violence had just been repaired but were once again destroyed.

The mob then turned “southward along Gottingen, raiding business establishments whose proprietors were believed to be aliens.”

Eventually, the crowd clashed with police at the corner of Buckingham and Barrignton Streets — where Scotia Square currently stands — with club-wielding police officers delivering beatings to members of the mob.

The mob moved dispersed but continued to raid other businesses in the downtown core of the city.

According to The Daily Echo, by the end of the night stores along Brunswick, Grafton, Jacob, Buckingham and Argyle Streets had been damaged.

The Crown Cafe as photographed in 1959. The cafe was the place where anti-Chinese riots in Halifax began in 1919.

A third night of violence was avoided after 110 military police were placed on duty on the night of Feb. 20.

“This will no doubt prevent the least possibility of any disturbance being participated in by soldiers,” wrote Colonel W.E. Thompson, the officer in charge of Halifax’s military forces, to the mayor of Halifax, A.C. Hawkins.

“In addition to this a sufficient armed force will be held in readiness to deal with any disturbance created by civilians.”

By the end of two nights of violence, thousands of dollars in damage had been carried out while “over a hundred” were taken to hospital.

The City of Halifax received letters from businesses seeking reimbursement for losses associated with the riots.

But the compensation never came.

It appears — at least according to the documents available — that any claims of responsibility were dismissed by the city solicitor who advised the city that they were not liable for any of the damage.

Business owners rebuilt and repairs were carried out. For the people of Halifax, life continued — with the anti-Chinese riots slipping into memory.

Police search for suspect in South Edmonton Common robbery
Jan 19, 2020 12:08 PM
Comments
We welcome your feedback and encourage you to share your thoughts on this story. We ask that you be respectful of others and their points of view, refrain from personal attacks and stay on topic. To learn about our commenting policies and how we moderate, please read our Community Guidelines.