Sometimes, the dark is a good place to be 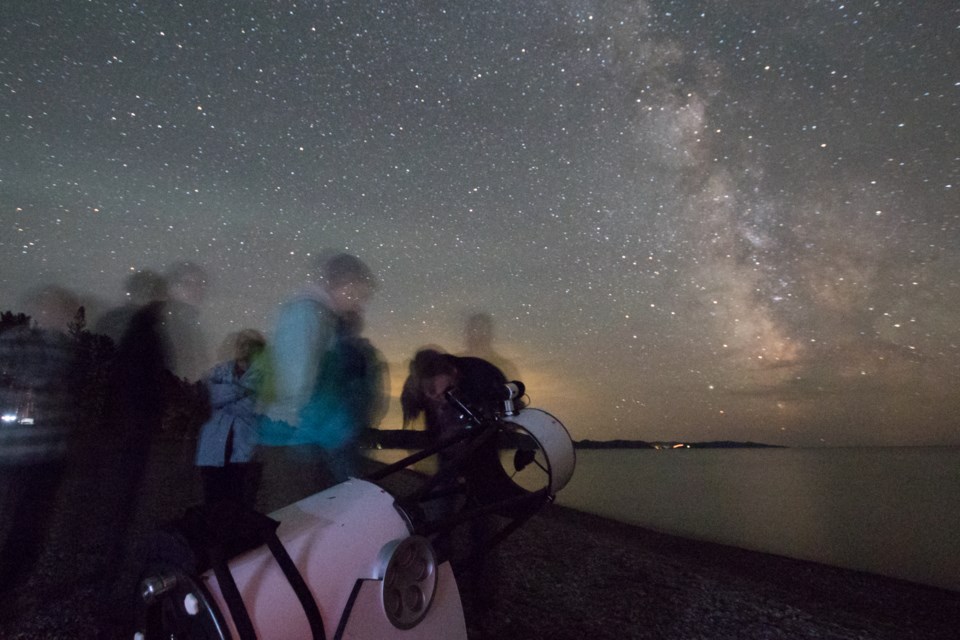 SooToday file photo from 2016 shows Jeffrey Deans of the Algoma Astronomers club at his telescope up at Lake Superior Provincial Park. Jeff Klassen/SooToday

If the answer to our COVID-19 woes is written in the stars, one of the best places to find it may be at Lake Superior Provincial Park.

A little over two years ago, Lake Superior Provincial Park was designated as a national certified dark sky preserve by the Royal Astronomical Society of Canada.

The park is essentially free of light pollution, making it one of the darkest dark sky preserves in the world, says the park website.

Since the Stone Age, people have looked to the heavens to gain understanding and inspiration for life on earth.

Today, that sense of wonder remains. Some have taken it a step further by joining astronomy clubs where like-minded people apply science to what was once a practice dominated by superstitions.

Algoma Astronomers is one such club, but since COVID hit, the club’s group activities have been put on hold.

“All public observing came to an end,” said Jeffrey Deans, spokesman for the informal local group.

The local club doesn’t have many group outings, which Deans says are difficult to do here. In the summer it doesn’t get dark enough until late in the evening and in the winter the clearest nights are typically the coldest.

Even Lake Superior Park, with its dark sky designation, isn’t exactly what astronomers using telescopes desire. They prefer open fields that are not close to bodies of water. Vehicle access is also important. Deans says his lightest telescope is 200 lbs, while his biggest is around 400 lbs.

That being said, the park provides a spectacular opportunity for stargazing, especially for amateurs. The location offers a chance for visitors to get a good look at The Northern Lights and Milky Way

“While the remote location, rugged terrain and lack of meadows or fields that are wide open to the night sky limit the value of the park to telescopic visual observers, it is a paradise for those shooting the night sky with Digital SLR cameras and wide-angle lenses. Via foot, canoe or snowshoe the park is full of beautiful places with beautiful night skies,” states the dark sky preserve application.

Deans hopes that once the COVID crisis is over, the club can generate more local interest in astronomy.

“A couple of events that help us out every year didn’t happen this year,” he said. “One is the Science Festival that Science North does usually at The Machine Shop. We get a booth there. Hopefully, events like that will start to pick up again.”

One goal is for the local astronomy club to get incorporated.

This will allow it to become part of the Royal Astronomical Society of Canada and open the door to funding from programs like the Trillium Grant. The money may be used to purchase a club telescope.

Deans recognizes this means more commitment on the part of club members. It means having a board of directors which is a step up from hobby status.

He would also like to see a stronger relationship with First Nations communities.

“You shouldn’t be going to Lake Provincial Park and learn about the traditional European constellations. It should be about the original inhabitants of the area. They’ve got a fairly rich skylore,” he said.

“The constellations are sacred to so many people like the Ojibwa who are the traditional inhabitants. It’s so important to them culturally and if we don’t protect places like this there is going to be nowhere left to where we can see them,” said Deans in a 2016 interview with Sootoday.

Other trends are opening up the skies to more people.

“One of the things that a lot of people are getting into is astrophotography,” said Deans.

All it takes is a simple SLR camera or even some mobile phones. Deans said you can take some incredible shots of things like the Milky Way along with the local terrain.

“It’s just growing exponentially year after year. A lot of people don’t realize what the camera can do. The sensors on these cameras are incredibly sensitive compared to the human eye.”

Check out Lake Superior Park's website for its. Eyes on the skies series for a preview of what to look for each month.