After rubbing shoulders with Donald Sutherland and such, Dr. Robert Korneluk, aged 70, went back to work on immunotherapy
Dec 16, 2020 11:00 AM By: Frank Rupnik 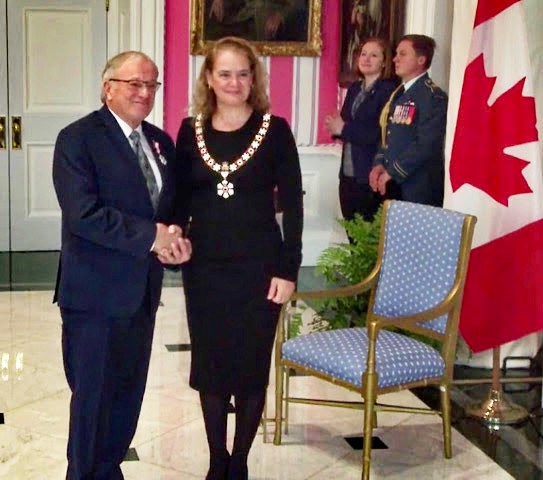 Dr. Robert Korneluk, a Sault native and cancer researcher in Ottawa, was awarded the Order of Canada by Governor General Julie Payette at a ceremony at Rideau Hall, Nov. 21, 2019. Photo supplied

A little over a year ago, Dr. Robert Korneluk received the Order of Canada in a ceremony at Rideau Hall.

The Sault native, who currently does research at Children's Hospital of Eastern Ontario in Ottawa, came a long way from his days in the classrooms of Cody Public School and Bawating High.

"It was really exciting because I got to meet a lot of people who were really Order of Canada types," he said. He got to rub shoulders with actor Donald Sutherland and other artists. "It was a lot of fun."

The Order of Canada Award is a crowning achievement for Korneluk, but the 70-year-old scientist still has work to do.

"It's the curiosity, it's the science that's always kept me going," said Korneluk.

It's also the knowledge that his work is saving lives and has the potential to change how we treat some of our most deadly diseases.

"In 1995, Dr. Korneluk and his team discovered a family of genes called Inhibitors of Apoptosis (IAPs) that control cell death," wrote Michelle Read in a University of Ottawa website story. "It’s the basis of his current work exploring how to enhance the immune system’s own natural response to cancers."

"In our lab, we’re working with a class of drug called SMAC mimetics which, when combined with immunotherapy, give an incredible response in mice ... We’re now running clinical trials to test dosing and efficacy of the treatment. I have high hopes that our treatment combination will turn into a standard of care for cancer patients," Korneluk told Read in the 2019 article.

Korneluk recently received a major grant from the Canadian Institute of Health Research, which he says will allow him another seven years of good funding into the study of immunotherapy and combined approaches to treating diseases. Researchers are looking at ways to make vaccines more potent and effective.

In this regard, the work has some potential in fighting COVID 19.

"There's never been more of a concentrated and intense effort globally," said Korneluk, when asked about the push to develop a COVID vaccine.

But he adds the quick development was built with the blocks of past research.

The pandemic forced labs across the country to shut down or dramatically slow down when it hit in March, but by July his work at CHEO was essentially back up to full speed.

"One of the reasons is that we have a lot of space so we can easily distance ourselves," said Korneluk. "Everyone wears a mask in the lab and I have an office that is isolated."

It's no surprise that COVID protocols are taken seriously in a research facility dedicated to fighting disease, but it's disheartening to Korneluk that some people in the community still see this as an infringement on their freedoms.

"The mask is your best bet," he said. "It's very effective."

Mask up and don't have parties, is the doctor's advice.

"We are almost there," he added.

Korneluk has been in Ottawa since 1985 and doesn't have any family connections to Sault Ste. Marie.

He has friends here who he tries to visit and he has many fond memories of growing up.

"I still consider it my home town. I always will," he said.