Glassworks to close its doors after almost 40 years

Charlie and Wendy Thomlinson hope to have operations all wrapped up by the end of October
Jun 9, 2020 12:55 PM By: Frank Rupnik 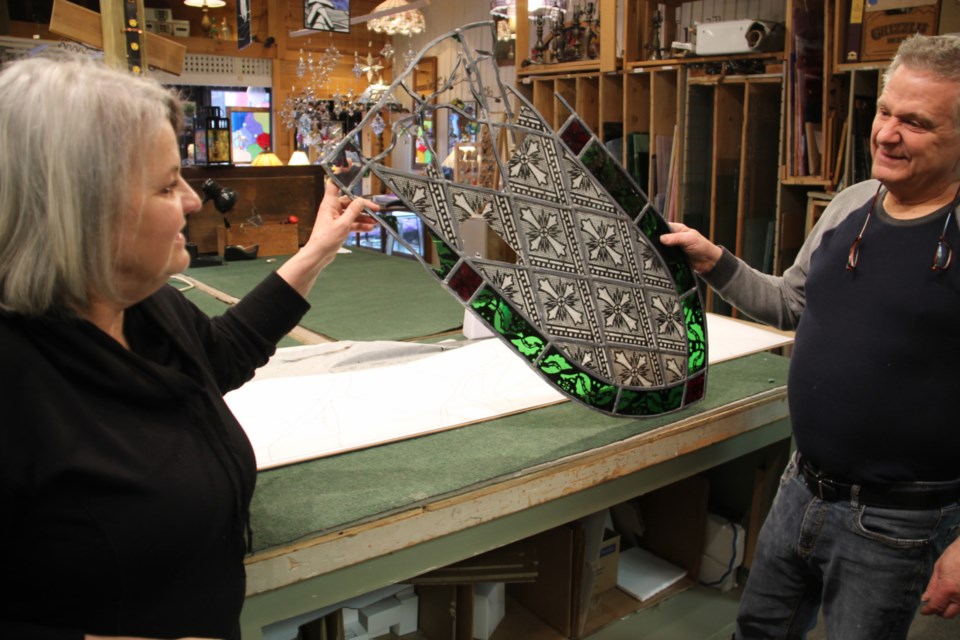 Every stained-glass project by Glassworks is a window into a labour of love that’s lasted more than 40 years.

Curtains begin closing on the long-standing Sault business on June 14.

That’s when Charlie and Wendy Thomlinson start winding down operations. They’ll have it all wrapped up by the end of October.

“Someone offered to buy my building,” said Thomlinson. “My wife and I have been talking about it. The deal was good and I guess we are going to do it now.”

He has a few jobs in the works and wants to finish those. “I don’t want to leave anybody in the lurch. I want to get my stuff done,” he said.

About 22 years ago, they moved into their current location on 308 Queen Street. Prior to that, they worked from home, but things got too busy.

They bought the building from Charlie’s mother and live above the business, which is a storied piece of downtown real estate.

Thomlinson’s great grandfather ran a butcher shop in the building in the early 1900s. He was injured on the job and changed his focus to the meat wholesale business, bringing cattle up by boat from Owen Sound.

“At one time in the Sault there was a butcher shop on every corner,” said Thomlinson.

Over the years, the Glassworks building housed a number of different businesses and it was home for Charlie, who admits it can get emotional thinking about closing shop and moving.

“I can’t name a church in the city that I haven’t been in at one time.”

But the work goes beyond churches. He and Wendy worked on the Sault Museum Clock Tower and the GFL Memorial Gardens.

One of the more interesting jobs Thomlinson recalls is restoring the Bishop Fauquier Memorial Chapel windows at Algoma University.

“They didn’t have a lot of money and I didn’t have a whole lot of skills,” jokes Thomlinson when talking about the project at the beginning.

He did one window for the project and they had to stop. Thomlinson was left holding the paint and glass pieces, but no project. “A rookie mistake,” he said.

That was about 30 years ago, but there’s a happy ending.

“Believe it or not, they came to me and said, ‘Hey could you finish the windows.’ “

He and Wendy patiently worked at finishing the job, which he said was the last thing on his business bucket list.

Thomlinson was employed at Algoma Steel. He took up stained-glass as a hobby inspired by an ad in Popular Mechanics. He took some classes in Bruce Mines, but most of what he learned was self-taught.

Success would not have been possible without the support of his wife Wendy, who also picked up the glass skills on her own.

“She’s been my right hand. I am more structural. She’s got the eye for colour and design. It’s been a good match,” said Thomlinson.

Thomlinson said the COVID-19 situation had no influence on their decision to wind down operations. He’s been quite busy and after his business closes there will be a void.

Thomlinson said there is nobody from here to Toronto who does the kind of work Glassworks does. Many people do stained-glass, but few are able to go into a church, take out windows for restoration or install new decorative windows.

It’s a business that requires a mix of art and structural design.

“An artist envisions something and builds it. Sometimes you build it and it’s not strong,” said Thomlinson.

He said it can be necessary to compromise a bit on the artistic vision to achieve strength and longevity.

“In all my years, all the churches I’ve done, I’ve never had a call back. Never once did I have someone say, Oh, there’s something wrong here. You didn’t do this right.”

“I’m proud of that,” said Thomlinson.

Thomlinson plans to take things easy and avoid the stress of bigger projects, but he’ll still dabble in his labour of love.

If someone needs a hand or advice, he’ll be there.

COVID-19 tough on food suppliers, but could lead to boost in local marketing, say experts
Jun 16, 2020 1:30 PM
Comments
We welcome your feedback and encourage you to share your thoughts. We ask that you be respectful of others and their points of view, refrain from personal attacks and stay on topic. To learn about our commenting policies and how we moderate, please read our Community Guidelines.