SooToday catches up with the longtime post-secondary educator on the eve of her retirement and finds her embracing online learning
Mar 31, 2020 10:30 AM By: Frank Rupnik 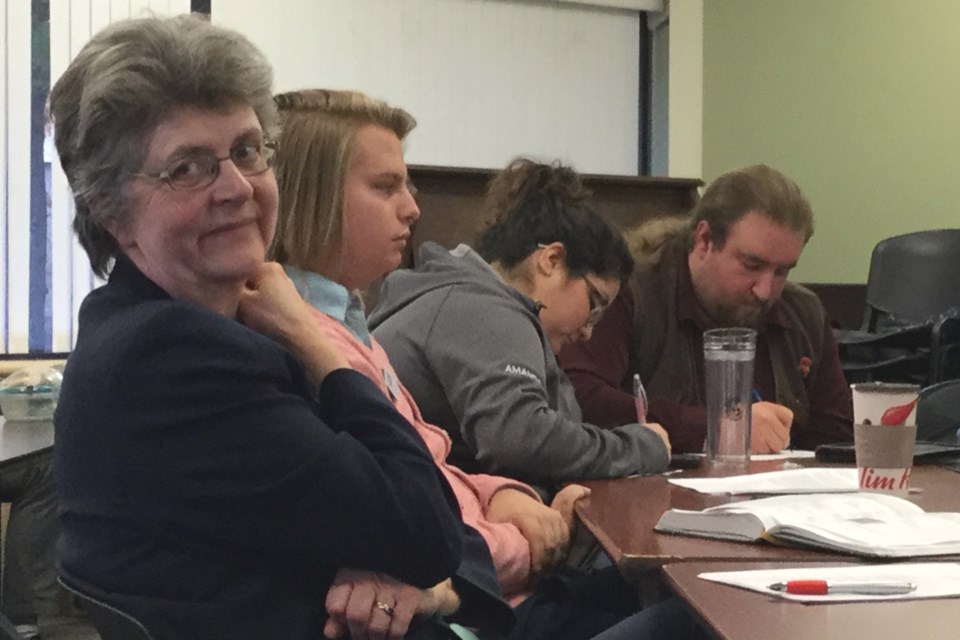 Celia Ross is shown in this file photo at an Algoma University senate meeting on December 2, 2016. David Helwig/SooToday

Celia Ross planned to walk across Europe after she finished teaching the last class of her career at Algoma University in June.

That walk will have to wait. Her path took an unexpected turn.

“It’s interesting because I had one set of plans all worked out,” said the long-time Algoma University president and current professor of French literature. “I taught my last class without knowing it was my last class.”

Coronavirus threw her a curve.

“It’s just a reminder we can plan away and the best-made plans can all go kablink.”

While she may have taught her last class at the university site, technology made it possible for Ross and her students to complete the work online.

Ross admits she’s the type of person who likes to be at the office in a work environment, but at the end of her career she found herself adapting.

For their part, the students didn’t miss a beat. They are handing in assignments and offering suggestions to Ross on better ways to communicate online.

Resources available to students on the Internet these days are remarkable, said Ross.

Ross was speaking specifically about accessibility to things such as music, films and old manuscripts.

The library was once the jewel in the crown of any university. It’s now become a work space. “The world is at our fingertips,” Ross said.

Ross said it may be too early to tell how the crisis will change the university going forward.

She hopes classes will get back to face-to-face learning in September, but she thinks that professors will use on-line tools more effectively.

However, she doesn’t envision a complete transformation to the online world. She says it’s harder for students to stay motivated if courses are completely online. The university experience would not be the same.

“Students really do need contact. They need groups, they need to be working together,” she said.

This crisis could prompt more modernization in higher education and hopefully some social changes, said Ross.

As a two-time NDP candidate in the provincial election and current president of the federal NDP riding association, social changes are often on Ross’s mind.

She has no regrets about running for office, but doesn’t see herself as a candidate again.

“It was an eye-opening experience,” she said. “It certainly is a good way for you to know your community better.”

As a university president she saw the community through a lens which focused on economic development and innovation. After knocking on doors she got to know the community more from the angle of people struggling to get by.

“It was a different angle for me. I’m very glad I did that,” she said.

Ross, who helped bring in Algoma’s independence and strengthen the school’s special mission with the First Nations community is still determined to make a difference.

She stressed the importance of advocacy groups in sparking societal change.

“It’s fine to be a leader, it’s fine to be an elected politician, but there is only so much you can do. You need a movement of people to bring about change.”

When the coronavirus situation subsides, other issues which are now out of the spotlight will need addressing, including the environment, said Ross.

“There is a big need for people to come together and say these are the things that are important to us,” she said.

Ross says advocacy work is probably in her future “because it really does bring about change.”

A walk across Europe is likely on the horizon too.

COVID-19 tough on food suppliers, but could lead to boost in local marketing, say experts
Jun 16, 2020 1:30 PM
Comments
We welcome your feedback and encourage you to share your thoughts. We ask that you be respectful of others and their points of view, refrain from personal attacks and stay on topic. To learn about our commenting policies and how we moderate, please read our Community Guidelines.