Described as a force, highly respected and remembered for community service
May 17, 2021 2:30 PM By: Frank Rupnik 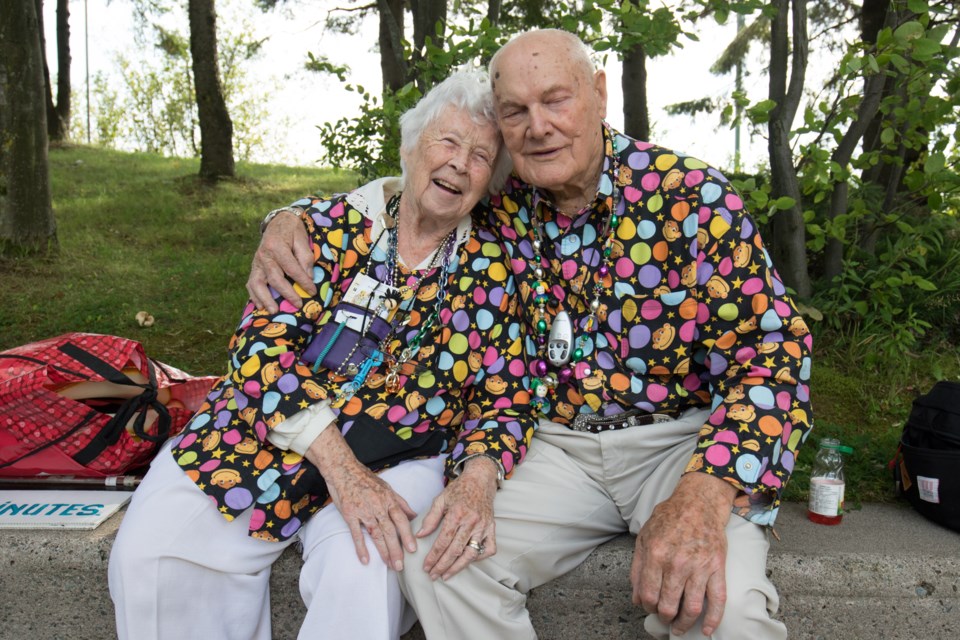 Ken and Evelyn Anstice, known to many as the balloon man and lady are seen in this SooToday file photo taken in 2016. Jeff Klassen/SooToday

Evelyn Anstice blazed a trail in the real estate world, but her years of making Balloon Magic with husband Ken may be the legacy etched in the community’s memory.

The couple, married for 46 years, was well known for creating balloon shapes at numerous events each year.

It was a way to bring smiles to faces and support to a wide range of local charities.

“It’s wonderful being known around Sault Ste. Marie, you walk down the street and all the kids point and say, ‘Hey, there’s Balloon Man!’ said Evelyn, the Balloon Woman, in a 2016 SooToday story.

She was born in 1924 in Detroit, Mich., the daughter of the late Charles Buckley and the late Zula Wright.

Evelyn moved to Canada in 1960, working both in real estate and journalism for the Blind River Standard, the Sudbury Star and the Toronto Star.

In 1984, she became a Certified Real Estate Brokerage Manager (CRB); a designation recognizing individuals who have achieved the highest level of knowledge in real estate brokerage management and marketing. Twice she was the recipient of the William R. Chitty Memorial Award for her contribution to the industry.

“She was a force,” said daughter-in-law Holly Mahn, who also worked for a time as Anstice’s secretary.

Mahn said Anstice was an inspiration for women in business. At one time she had 49 salespeople working under her wing.

“She thought outside the box. She made it work,” said Mahn.

“Times were tough,” recalled Mahn. “A lot of people worked at other jobs. Evelyn hired people part time. It worked for her.”

“She was an awesome person,” said Mahn. “I admired her so much. She set an example. Evelyn didn’t believe in the word ‘No’. It was, ‘Yes you can.’ “

One of those who benefitted from Anstice’s advice and encouragement is Dom Coccimiglio. a long-time member of the Sault real estate scene.

Anstice hired Coccimiglio in 1988. They maintained a close relationship right up until the COVID outbreak.

Coccimiglio started out as one of the part-timers given an opportunity by Anstice. When she closed up her operations, she helped Coccimiglio set up his business.

“I have nothing but respect and loyalty to that woman,” he said. “She taught me everything I know.”

He has a picture on his filing cabinet of Anstice handing him an industry award.

His father was a Shriner and Mason. Evelyn was involved with The White Shrine of Jerusalem and The Eastern Star - Nokomis Chapter. “Her mission was to benefit the less fortunate while honouring her faith in God through charitable work,” the obituary states.

“They pursued that to the nth degree,” said Ken Jr. “They were always doing things for charity.”

Balloon Magic was the most notable way they give back to worthy groups such as the Alzheimer’s Society, the CNIB, Shriners Hospitals, to name but a few. The duo was everywhere.

Ken Jr. said that in the early days his dad would blow up the balloons himself and make them into a variety of shapes. Evelyn would greet the children and ask them what shape and colour they wanted.

“Later, it got so big he couldn’t blow them up fast enough,” he said.

They got a generator and Evelyn would blow up the balloons and hand them off to Ken who would create the magical shapes with his large hands.

“It became quite an operation. They would go all day in their 70s or 80s,” said Ken Jr.

He said they were making Balloon Magic right up until the time Evelyn got sick. He’s sure they would have started things up again if they could have.

Ken Sr. is now 99 and remains very active and sharp. He still has his driver’s licence and works around the well-known house on McNabb Street with the purple door where he and Evelyn lived and raised a family.

They also had seats behind the Soo Greyhounds bench and never missed a game until Evelyn became too ill and Ken Sr. didn’t want to leave her at home alone.

Ken Jr. said when his mother died his dad was a lost soul, but Evelyn gave him new life when they got married after a four-month courtship.

He expects his dad to maintain his outgoing, sociable personality, but the loss of his soulmate certainly hurts.

A number of years ago, Ken Sr. received the Queen’s Medal of Merit at City Hall.

His response was to say that it was Evelyn who really deserved it.