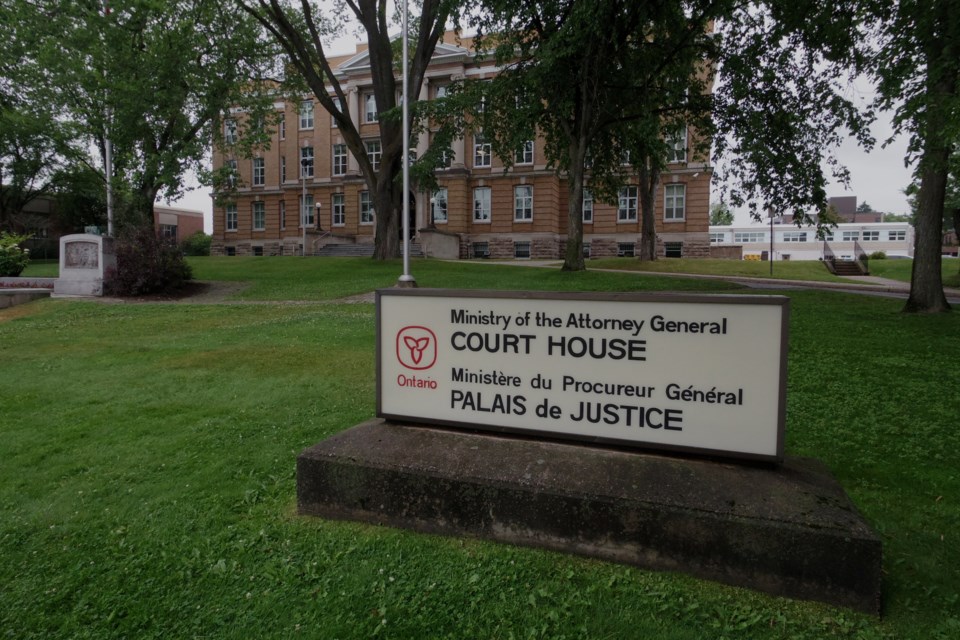 The Sault Ste. Marie Courthouse is picture in this file photo

A Sault Ste. Marie judge recently decided that three city police officers could testify remotely from the police station, rather than giving evidence in the courtroom, at the trial of a local man.

Ontario Court Justice John Condon's written decision, which was released July 15, stemmed from concerns about the deadly pandemic that has gripped the world and resulted in the deaths of thousands of Canadians.

"Police officers are front-line workers and arguably at greater risk of acquiring and transmitting COVID-19," he concluded in the ruling.

Having the officers testify via video link would ensure that they are not physically in the courthouse and thereby reducing the safety risk to court staff, lawyers and the accused, he said.

Assistant Crown attrorney Marie-Eve Talbot sought the order in the trial of Thomas Molland, who faces eight charges in connection with an Aug.1, 2019 incident that occurred on Gore Street.

The trial began July 20, and is expected to resume Sept. 23.

Molland is charged with two counts of breach of probation and three counts of assaulting a police officer.

As well, he is accused of obstructing police by screaming and yelling, uttering a threat to cause bodily harm, and resisting police by pushing, shoving and pulling.

In his decision, Condon outlined what has occurred locally and at other provincial courthouses since the Ontario Court of Justice announced a state of emergency on March 17 because of the COVID-19 pandemic.

At that time, procedures were established to reduce the number of people attending court for criminal and family matters, and all non-urgent cases were adjourned.

Three months later, it was announced that criminal trials and preliminary hearings were resuming, and that a select number of courthouses, including Sault Ste. Marie's Queen Street East location, were designated for a July 6 opening.

Court operations have expanded under Stage 1, but the number of open courtrooms and the number of people who can be there or in the courthouse, remains restricted in accordance with health and safety procedures.

Condon noted the preventative steps that have been taken to re-open the courts to the public.

Plexiglass has been installed around areas occupied by court staff, witnesses, counsel and judicial officers.

In the Sault courthouse, dozens of hand-sanitizing stations have been located in the public area and additional cleaning staff has been employed.

Personal protection equipment (PPE) also has been provided to staff and judicial officers.

All of these actions are intended to mitigate transmission of coronavirus to anyone going to the courthouse, the judge said.

The Crown's position at the July 7 hearing was that the three officers are frontline workers in the community and can't self isolate.

The nature of their work "makes the recommended practice of self-distancing, difficult, if not impossible."

As such, there is a greater risk they could be exposed to the coronavirus and the potential that any one of them could be a carrier, Talbot said.

Having the officers in the courtroom for the trial, creates a real risk of transmission to counsel, the accused and staff.

He argued that permitting the officers to testify by video link, rather than facing his client in a courtroom, creates a perception of unfairness – a perception that is further magnified if they give evidence from the police station.

"This is a location that lacks both the aura and neutrality of the courtroom."

The defence pointed to the provincial government's guidelines, with its screening procedures intended to mitigate the likelihood of transmission of the coronavirus in the courthouse.

When this is considered along with the lack of active COVID-19 cases in Algoma, the likelihood of transmission of the virus is minimal, McCooeye said.

In his decision, Condon concluded there is a risk that any one of officers has been exposed to the coronavirus in the community.

"That risk is low, given the ongoing limited number of coronavirus cases in Algoma District. Low risk and no risk are not the same thing," the judge said.

"It cannot be ignored by this court that COVID-19 is a potentially dangerous virus."

Condon questioned what would be gained by potentially exposing Molland, defence witnesses, counsel, court staff, judicial officers and others, by having the police officers come to the courthouse to testify, when there is a suitable technological alternative that doesn't impair or compromise Molland's right to a fair trial.

"There is no meaningful benefit to be gained under these particular circumstances, while, at the same time, there are potential adverse affects from hearing these officers testify in person."