The story of the first lock (and what's left of it)

In this edition of Remember This we learn about the North West Company lock at the St. Mary's Rapids
Apr 21, 2019 11:00 AM By: Remember This? 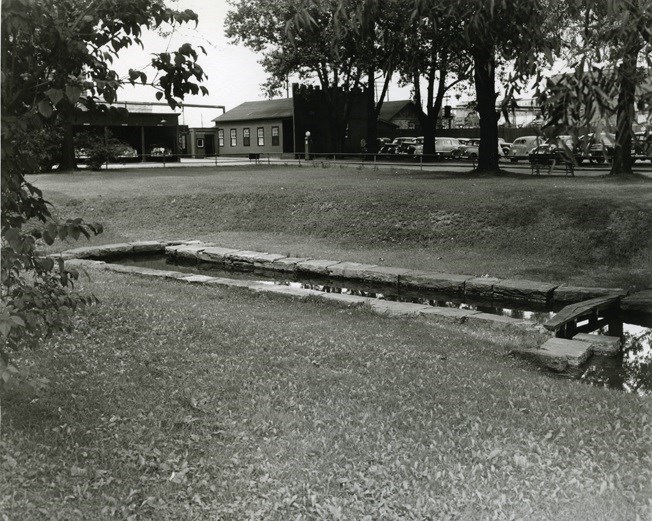 The North West Company Lock can be found at the old St. Mary’s Paper site, in the area now owned by the Algoma Conservatory of Music.  While it might be small in size, it’s the predecessor to today’s locks.

And it has links to two major historical points in Sault Ste. Marie’s past: the fur trade and F.H. Clergue’s industrial empire.

A canal and lock system at the St. Mary’s rapids was first seriously suggested in 1788 by British Royal Engineer Gother Mann.  His idea was to make it easier for fur traders to transfer goods between ships on Lake Huron and Superior: rather than attempting to cross the rapids or portaging long distances over land, they could bypass the area via “a navigable canal.”

Almost a decade later, in 1797, the North West Company began to take a closer look at what is now Soo, Ontario.  Previously, the company had focused its attention on the south side of the St. Mary’s River and Fort Michilimackinac.  However, Jay’s Treaty had come into effect between Britain and the United States, requiring that the North West Company move its operations north, to the British side of the river.

The North West Company built a new post on the north side of St. Mary’s River.  And, as part of their new development, they also constructed a small canal system.

Fur trader Daniel Williams Harmon described the rapids and their current as being “too strong to be stemmed by any craft,” underscoring the importance and usefulness of the canal for the industry.

This canal became the subject of some controversy in 1802 due to competition between fur trade companies.  The XY Company claimed that the North West Company was monopolizing the waterway and using the canal exclusively for themselves.  The North West Company countered, saying that their canal was their own property; they would need to require “an adequate toll” from others who wanted to use it.

It’s this disagreement that gives us the clearest sense of what the canal and lock system looked like, with all parties involved describing the area and their opinions for how it should be used.  The canal was approximately 3,000 feet long, with a path for oxen alongside it. The lock was 38 feet long and less than nine feet wide, and it was capable of raising a boat by nine feet. This canal and lock system was intended to carry canoes and bateaux, cargo boats frequently used in the fur trade.  It was adjacent to storage facilities and a sawmill.

Despite the work that had been performed on the area, a report by Royal Engineer, Captain R. H. Bruyeres in 1802 described the conditions as being poor, with everything built on swampy ground full of large rocks.  He further wrote that the construction done on the lock and canal was “of a very temporary nature.”

Indeed, the canal existed for less than twenty years.  However, the composition of the soil may not have been what did it in.

In 1814, Americans seized and destroyed the North West Company post – it was an act of retaliation for the capture of Fort Michilimackinac (located on Mackinac Island) by merchants and British forces which also included their Indigenous allies, during the war of 1812.  As part of this retaliation, the buildings in the area were burned. The canal and lock, constructed largely out of wood, likely went up in flames along with them.

However, the canal and lock weren’t completely destroyed, and in 1886, Joseph Steere, a prominent judge from Sault, Michigan, began to search for it.  His excavations paid off: he found it, in ruins but partially intact.

Then, in 1896, approximately a century after it had first been built, F.H. Clergue himself went in search of the lock.  He had recently purchased land along the river and had heard references to an old canal system. Encouraged by Judge Steere’s excavations, he examined the property and eventually uncovered the ruins of the old lock as well.

The lock was buried under silt from the river.  Parts of it had collapsed, but the general shape of it was still visible, and the original timbers were still there and in decent condition.  He cleared the site, blocked off the water flow, added gates, and eventually provided plumbing for the purpose of keeping fish. He also decided to restore and preserve the lock, making it as similar as possible to what he felt was the original design; however, rather than using wood, he opted to use stone.

The lock is still there today, with F.H. Clergue’s stone resting over the original boards from the days of the fur trade.