The rise and fall of the New Toronto Hotel

This week Remember This looks back at the surprisingly rich history of what is now an empty lot at the corner of an intersection that no longer exists
Mar 31, 2019 11:00 AM By: Remember This? 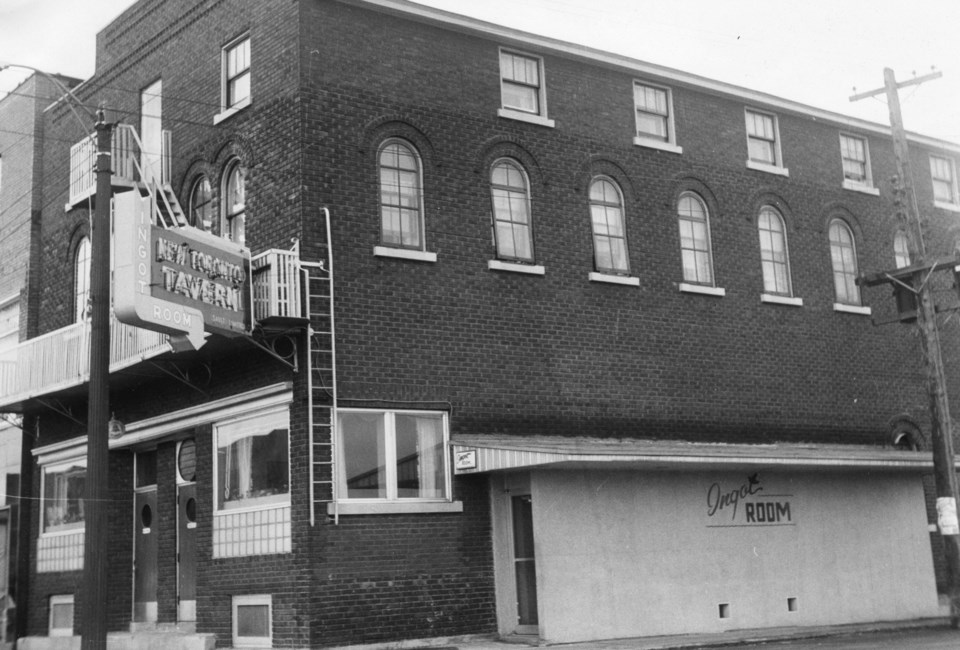 It may have been torn down two decades ago, but many remember the New Toronto hotel and tavern in Sault Ste. Marie’s James Street neighbourhood.

The building, located at the corner of James and Cathcart streets, didn’t start off as a hotel. It first appeared in city directories in 1919, as the home of Spadoni’s hardware – the store that would later become James Street Hardware and then Spadoni’s Furniture.

In 1921, the building was purchased by business partners Michael Maich and Joseph Culina. Spadoni’s remained in that location for five more years, before moving next door to what would become its permanent, present-day location.

After briefly remaining vacant, the James Street Arcade and General Store opened in 1927. Managed by Frank Gardi and Mr. B. Bumbacco, the business focused on a “gents’ furnishing line” along with dry goods. Frank Gardi became a prominent citizen and was profiled in a 1928 Sault Star article, which described his time as an ACR blacksmith as well as running various local businesses. The article described how he would be “seen almost daily, greeting old friends among the races other than his own,” and praised him for his patriotism to the British flag.

In the article, he commented that “[t]he crying need of Algoma is development.”

However, despite this success, in 1929, the James Street Arcade and General Store suffered a devastating loss when a fire destroyed almost half of its inventory, with $8,000 in damages. The fire was severe enough that it made the Globe and Mail, with an article noting that the building “owned by Mitch and Coalon” suffered as much as $1,000 in damage.

In 1930, the building sat vacant again, and then in 1931, the New Steam Baths opened, one of four public bathing facilities in the city at the time, all on the West side.

In 1935, Maich and Culina embarked on a new business venture when they closed the New Steam Baths and instead opened the New Toronto Hotel.

The New Toronto initially functioned as more of a boarding house, focusing on long-term residents, many of whom, like the owners, were Croatian. They also had a bar with two separate beverage rooms: one for men, and one for ladies and escorts. It was, at the time, required that beverage rooms be segregated by gender.

In the 1950s, the New Toronto expanded, building a third floor addition. At that point, Algoma Steel was undergoing major developments: it had signed an agreement with General Motors and expanded the steelworks.

With this change came a demand for new workers, and those new workers needed a place to stay. Situated in the West End, adjacent to the steel plant, the New Toronto Hotel was well-poised to take on new guests; its third floor addition was in direct response to the demand for more rooms.

The New Toronto would later expand further, opening the Ingot Room, a nightclub on the lower level.

The hotel wasn’t without its share of excitement. There were police raids and suspended liquor licenses – in 1940, the New Toronto was included in a major raid by police targeting establishments who sold alcohol outside of specified hours. The wives of steel plant workers had complained that their husbands were drinking away their paycheques, stopping at the hotel bar on their way home on payday. Police reacted swiftly, charging the proprietors.

However, that didn’t stop the business from bending liquor laws and evading regulations. In later years, one employee recalled bringing wine up to guests’ rooms, the alcohol hidden in old Javex bottles.

Fights were also common in the hotel’s bar, inspiring its nickname, “Bucket of Blood.”

In the mid-80s, the New Toronto Hotel was sold to new ownership. The business was renamed the Jamestown Hotel, and it continued for approximately eight years before becoming Bobby-Joe’s Bar and Grill.

Ultimately, the building was torn down in 1999 – it’s now an empty lot at the corner of an intersection that no longer exists.