The mysterious disappearance of Earl and Dolly Kirk 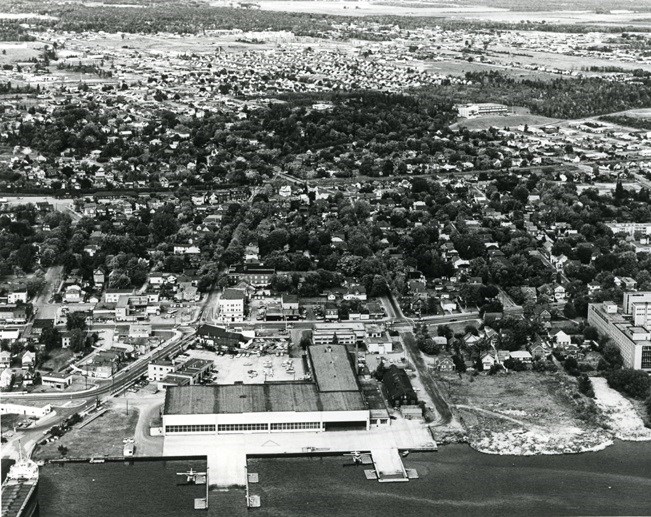 This aerial photo was taken in the 1960s, but it shows the spot where Earl and Maggie Kirk's car was found. Sault Ste. Marie Public Library archive

In 1955, a Sault Ste. Marie resident went missing . . . and inadvertently led to the solving of a mystery that had puzzled North Bay for the previous 15 years, what the Winnipeg Free Press at one point called “one of Canada’s strangest disappearance cases.”

Arthur Rooley had disappeared in mid-October. There were concerns for his safety – he was in a distressed state of mind and had threatened to drive off of the CPR dock, at the foot of Pim Street, into the St. Marys River to commit suicide. Within a couple of days, when he hadn’t turned up safe, the police opted to drag the river in search of his vehicle, to see if he had followed through with his threats.

They did find a car. But as they pulled the hood and grille from the water, they quickly realized it wasn’t the vehicle they were looking for. Instead, their finding immediately called to mind a black Plymouth that had vanished fifteen years earlier.

On October 4, 1940, Earl and Dolly Kirk from North Bay were on a trip to Manitoba by way of Northern Ontario. They stopped by a Sudbury gas station to fill up, an attendant would later confirm, and then headed towards the Sault.

That was the last time they were seen alive.

They didn’t make it to Manitoba; they hadn’t crossed the border into the United States either. However, there was also no suspicion of suicide or foul play: the Kirks were well-off and well-liked. They had children, all of whom they had left behind as they went on their vacation.

Police assumed that there had been a terrible accident. However, they searched the Mississagi River for their car to no avail, and eventually called off the search when winter weather hit.

There were some false alarms over the years. In 1941, body parts were discovered in an old metal box in a scrapyard in Sault Ste. Marie, sparking speculation that it may have been the remains of the Kirks. However, the box turned out to have belonged to a doctor; upon the doctor’s death, the human remains were discarded, winding up in the scrap yard.

Also in 1941, fishermen near North Bay found human hair on their fishing hooks. However, a search of the lake turned up nothing, the area did not match the Kirks’ last-known location, and the hair did not resemble either Earl or Dolly’s.

And finally, an Alaskan man attempted to drain the Kirks’ bank account by sending a letter instructing that the money be transferred to him. The attempt landed him in jail, but there was no indication that he had killed the Kirks.

In 1947, the Kirks were legally declared to be deceased, despite their car and their bodies never being found. Their children – one of whom was only a baby when they vanished – would receive a share of their estate when they became adults.

The Kirks’ disappearance so completely baffled police that it became somewhat of a legend. The media, as well, found themselves plagued by the question of what happened to the Kirks . . . until the car turned up at the bottom of the St. Marys River.

Needless to say, there was considerable attention and curiosity over the discovery of the car. The vehicle was mud-covered, and it was impossible for divers to get a clear look at anything that would identify the car. However, as they hauled the car out of the river, the first glimpse at the license plate confirmed it: this was the Kirks’ car.

Once the water had poured out and the vehicle had been inched onto dry ground, police cleared the spectators from the area and opened the doors of the car. Inside were the remains of a man and a woman. Their identification papers and personal possessions, in various states of decomposition, further confirmed their identity.

The ignition was still on, and the car was still placed in reverse. A decade and a half after they went missing, police were finally able to piece together what had happened to the Kirks: on their way to Michigan, they had likely mistaken the CPR dock for the ferry dock, tried to turn around, misjudged where they were in relation to the river, and backed off the dock into the water.

News of the discovery travelled fast and far. In Saskatchewan, the youngest Kirk daughter found out about her parents’ bodies via radio broadcast; she was sitting and listening with her aunt, who had stepped in to raise her after the disappearance.

When the initial shock wore off, the aunt described feeling vindicated. “I’ve always felt they must have driven into a river or something,” she told reporters.

The day after police found the Kirks’ vehicle, they located a second car in the river. Divers confirmed that this car did belong to Arthur Rooley, the missing man. His body was recovered later that day.

The hanging of Frederick Schultz
Jan 12, 2020 11:00 AM
Comments
We welcome your feedback and encourage you to share your thoughts on this story. We ask that you be respectful of others and their points of view, refrain from personal attacks and stay on topic. To learn about our commenting policies and how we moderate, please read our Community Guidelines.