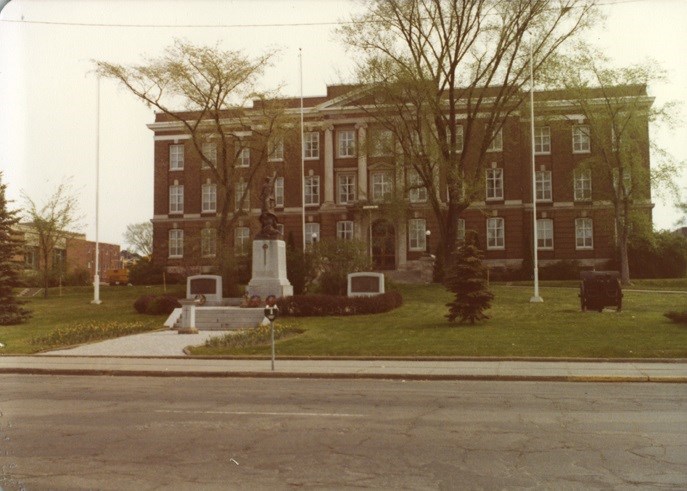 In late September of 1948, the trial began for the murder of May Rivers, a young woman found dead in a Blind River hotel room.

Her brother-in-law Richard Rivers was accused of killing her, and he pleaded not guilty. The prosecuting lawyer was A.A. Wishart, with Ian Munro as the lawyer for the defense, and there were 26 witnesses called to testify.

Over the course of the trial, the prosecution outlined what it felt happened, pieced together from witness testimonies and Richard’s own account of the evening. Richard had bumped into May while out in town and made plans with her to see a show that evening.

However, instead of going to the theatre, they instead went to a hotel room, registered in Richard’s name, where they consumed alcohol and had sexual relations. He murdered her that night. The following morning, he went out for coffee, ordered breakfast (and then cancelled it), and went back to Mississagi, where he hid out in the woods.

On the first day of the murder trial, proceedings were held up during a debate over whether to show a photograph of the murder scene.  The judge, Justice G.A. Gale, questioned if the viewing of the gruesome image could prejudice jurors against the accused; the prosecution argued that it was a necessary piece of evidence that the jury had a right to access.

The picture was ultimately allowed as evidence.

In addition to crime scene details, information about Leonard and May was also discussed throughout the trial. May had recently given her youngest baby to be raised by her aunt-in-law, since she was planning to return to work. After approximately a year of marriage, due to Leonard’s job in White River, Leonard and May had only lived together for approximately a month.

One witness, a friend of the family, hesitantly admitted she had seen May go out with men who were not her husband; more confidently, she said that May was intoxicated on at least some of those occasions.

Many of the comments about May took a more vicious turn. While the papers initially described May as having “a cheerful face” and “being a willing and conscientious worker, accepting jobs others would refuse,” that positivity soon waned.

At one point, the defense attorney described her as “a woman of completely primitive emotions . . . She had loose morals and drank excessively . . . and was living the type of life that sometimes leads to violence.”

Richard commented that “if anyone had wanted to find May, they’d only have to look on the street for her.”

Leonard’s testimony furthered those details, as he spoke of what the Sault Star described as “[a] bitter love story of a short married life full of bickering and fighting.”

Previously, Leonard was arrested and charged with assault against May. The incident stemmed from a fight they’d had: he wanted to “[go] with another girl,” she tried to stop him, and he became angry, telling her, “you had your fun and I didn’t bother you.”

That fight marked a turning point in their relationship: he no longer wanted to see her, didn’t intend to let her know when he was in town, and refused to support her monetarily, forcing her return to working life.

While their marriage was not without its strife, one touching moment occurred in the courtroom when Leonard was allowed to search through his wife’s wallet, found in what the papers termed “the death room.”  He pulled out a sheet of paper, a note to May that read, “Don’t forget what I told you, honey. Be true to me and take care of Babs [the youngest baby] and you won’t be sorry.”

Check back next week to read about the conclusion of the trial.

The great Alona Bay uranium rush of 1948
Feb 2, 2020 11:00 AM
Comments
We welcome your feedback and encourage you to share your thoughts on this story. We ask that you be respectful of others and their points of view, refrain from personal attacks and stay on topic. To learn about our commenting policies and how we moderate, please read our Community Guidelines.