Structure was meant to represent the marriage between Algoma Steel's management, workers and community, after restructuring
Oct 23, 2016 11:00 AM By: Remember This? 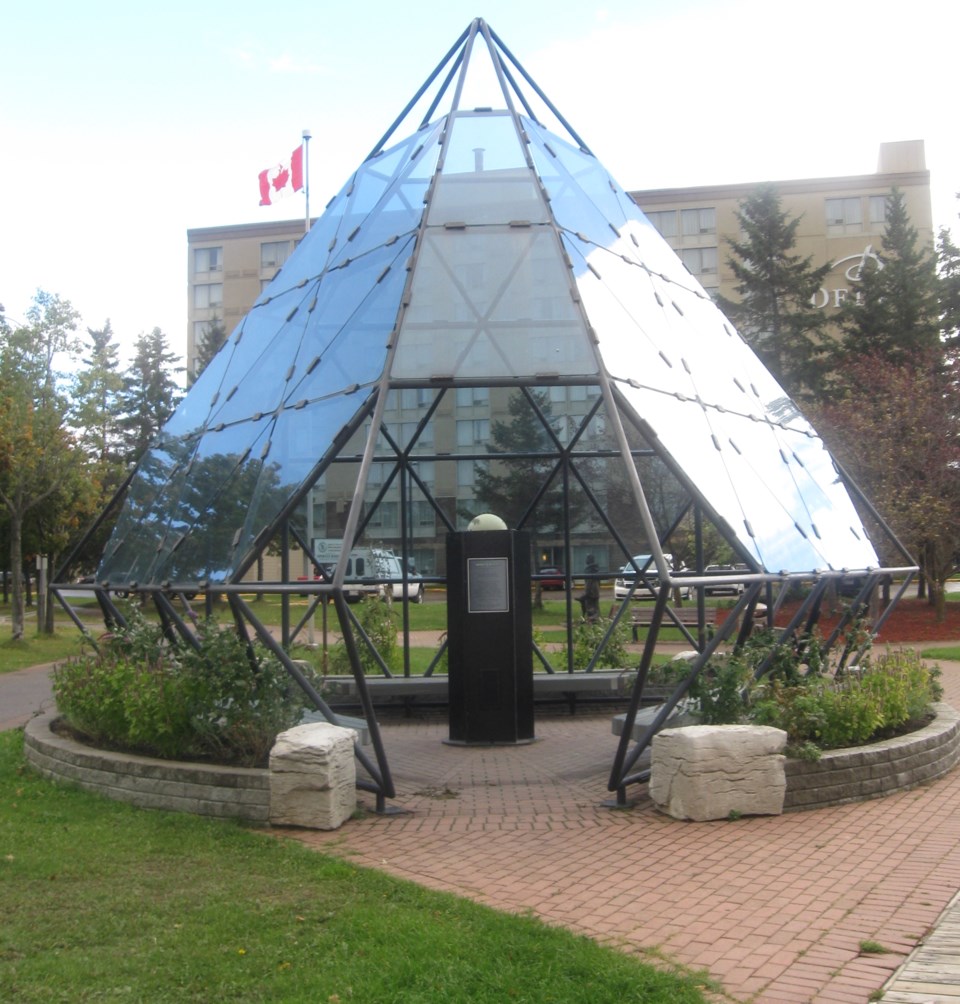 Spirits Rising. From the archives of the Sault Ste. Marie Public Library

Located on the waterfront, adjacent to the Delta Hotel is a steel and glass structure measuring 25 feet high and 20 feet across.

This structure has become a prominent focal point of the Sault Ste. Marie waterfront.  The original concept for the project originated with the Community Action Team led by Frank Sarlo.

This group approached the Sault Ste. Marie Home Builders Association and over the next year they hammered out the details for a lasting monument that the public could enjoy.

The three-sided pyramid was constructed of steel and glass.  Algoma Steel supplied the steel for the project which symbolizes strength, both a physical strength and strength in character.  The blue glass panels signify light and visual appeal.   The architect of the monument was Gordon Mezzomo.  The idea behind the structure was to represent the marriage between the three groups — management, labour and community following the restructuring of Algoma Steel and showing how they met harmoniously at the top.

The expected cost of the structure was $60,000 but due to the overwhelming number of volunteers from Sault Ste. Marie’s tradesmen, this cost was cut in half.  Gordon Mezzomo boasted about the quality of the workmanship as “…finer than can be found on many construction sites!”

Members of Algoma Steel began construction on the project in January of 1993 at the steel plant.  The project took more than 1,000 hours, all done by volunteers.  By June of 1993, the completed structure was moved by Purvis Marine and taken from the steel plant by water to the site where it now stands.

The land that the structure sits on was made available by the community, with the consultation of Michael Burtch, who was the Director of the Art Gallery of Algoma at the time.  A pedestal was added to the centre of the structure. Each side of the pedestal contains plaques detailing the background and acknowledging the many people that were involved in this project.

Once the structure was put in place the public was invited to submit entries to suggest a name for this new landmark.

From the over 800 submissions received a Separate School Board teacher, Joan Foster was selected as the winning entry with “Spirits Rising.”

From her description, Spirits Rising reminded her not only of the three founding nations of Canada — the First Nations, English and French but also of the three groups that joined together to help restructure Algoma Steel.

She wrote, "Spirits Rising symbolizes the unfailing spirit of these people and what can be accomplished when we work together today to create a better tomorrow.  Knowing that the very heart of our city will continue to live on, we rejoice with ‘Spirits Rising’.”

The Grand Opening of the Sprits Rising monument was in July of 1993 and has been a beautiful addition to the Sault Ste. Marie waterfront ever since.

The addition of benches on the inside and flowers around the exterior have made it an inviting place for visitors and residents alike to stop and enjoy our beautiful waterfront!