Remember This? Heading to Bellevue Park? Why not take a street car

Windsor, Ontario was the first Canadian city with an electric streetcar system, which was introduced in 1886.

Other Canadian cities soon followed, with St. Catharines in 1887 and Toronto in 1889.

By World War I, nearly 50 Canadian cities had streetcar systems in place.

Not to be left out of this “new transportation movement”, the International Transit Company, owned by Francis H. Clergue and operated by the Consolidated Lake Superior Company secured a franchise from the Town of Sault Ste. Marie on July 1, 1901.

This franchise granted the company exclusive rights to operate street railways for a period of twenty-five years.

Once the franchise and the necessary financing were in place, the contract was awarded to J.H. McKnight for the construction of the street railway.

Construction began in July 1902 along Queen Street at the intersection of Gore and Queen Streets and traveled westward to Huron Street and eastward to Upton Road.

The street railway was operational by the end of 1902.

In accordance with municipal by-laws, the Transit Company was required to run at least one car per hour between the hours of 6 a.m. and 10 p.m. Monday through Saturday.

Cars were not allowed to operate on Sunday.

The streetcars were not to exceed a speed of 10 miles per hour.

The fare was set at five cents per one way trip, factoring in inflation, this fare would be about the equivalent of $1.05 today.

The line started with five motorized cars which were dark green.

The cars lumbered along the tracks with a cow catch in the front to prevent the possibility of any collisions between the streetcars and the livestock that could find its way onto Queen Street!

During the rush hour periods three trolleys were used.

The original cars were operated by a conductor and a motorman but eventually were replaced by one-man cars.

The trolley cars ceased operation in October 1941 with the fare to ride remaining the same as it was when it began, five cents, which is a bargain when you consider the cost to ride a bus now in Sault Ste. Marie is $2.50!

Bus service succeeded the streetcar service for the city at that time, most likely to offer more routes to the growing number of riders.

Although the street railway was not a profitable operation, it did break even.

It was among the only companies to continue to operate throughout the turbulent period following the collapse of Francis H. Clergue’s industrial empire in Sault Ste. Marie. 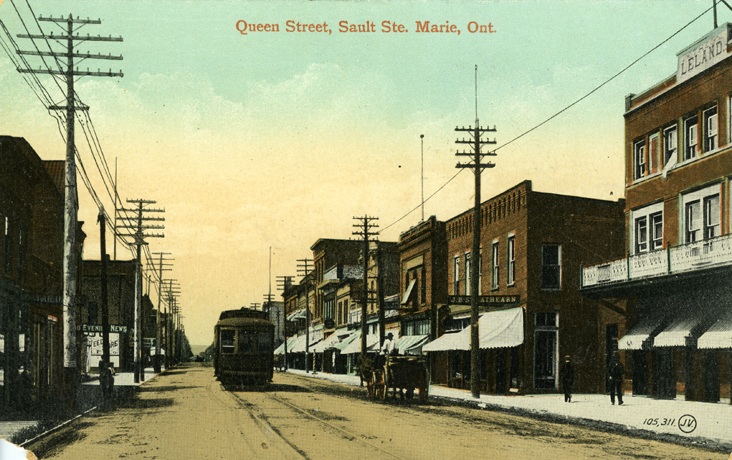