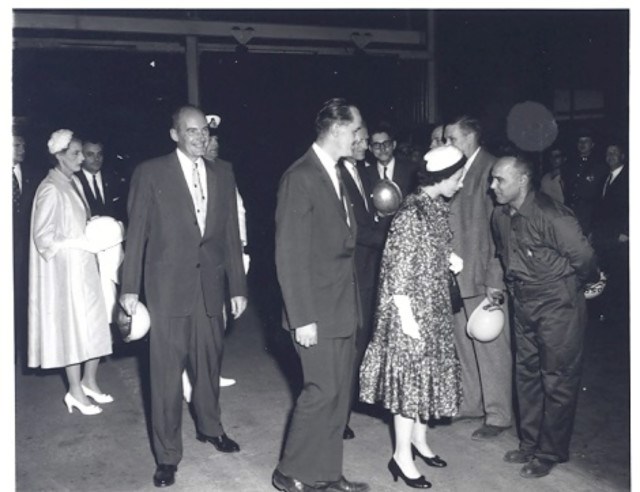 The following article on Queen Elizabeth and Prince Philip's 1959 visit to Sault Ste. Marie first ran on Dec. 15, 2019 as part of the Remember This column, which is written by the Sault Ste. Marie Public Library.

We thought readers might find it relevant today, as the world mourns the Duke of Edinburgh's death at the age of 99.

So here it is again:

In July of 1959, royalty came to Sault Ste. Marie when Queen Elizabeth and Prince Philip stopped in, part of a 45-day tour of Canada.

The city was all decked out in preparation for their visit, with no expense spared. The Globe and Mail reported that Algoma Steel alone spent $125,000 on decorating the plant, and another $20,000 on its hotel, The Windsor Park.

Queen Elizabeth and Prince Philip arrived by water, in a royal yacht surrounded by an entourage of close to 60 other boats – including the RCMP the US Coast Guard, warships, freighters, motorboats, and even sightseeing boats.  One of the spectator boats was so filled with gawkers that it listed sideways, prompting one spectator to exclaim, “Holy Cats, that makes me sick to look at it!”

From the yacht, the couple travelled to shore on the royal barge, landing at Clergue Park.

The excitement of the crowds was high – first, because of a false alarm during a dry run of the barge coming to shore. When the royal couple actually arrived, the Sault Star reported that the crowd “surged forward,” trampling barricades and posing a challenge for RCMP officers, veterans, and legionnaires trying to keep order.

While both the Sault Star and the Globe and Mail agreed upon the level of excitement concerning the royal visit, the newspapers significantly differed in their reporting of a near-accident that occurred.

While the Queen was disembarking from the barge at Clergue Park, she walked along a ramp covered with a red carpet. The Sault Star reported that the water was choppy that day, and “a heavy swell . . . caused the barge to heave and dragged the carpet backward some four inches.” The Queen stepped off the carpet, and Prince Philip reached to steady her, although it was unnecessary at that point. The Queen smiled at the Prince, to the delight of the cheering crowd.

The Sault Star, perhaps quick to downplay the near-mishap, headlined the news as “Slips on Carpet-Regains Balance: Ordinary Day in Monarch’s Life.” An article detailing the incident seemed to focus on the relatability of the royal couple almost losing their footing, proclaiming them “Real People!”

The Globe and Mail, however, had quite a different take, with headlines speaking of the “royal guffaw” caused by the red carpet, and a lengthy description of the incident that caused “Royal dignity [to go] by the boards” with the near disaster. “[Z]ip went the long rug, pulled about a foot toward the water. The Queen and Philip stumbled, the mayor and his wife lurched, Mr. Starr reeled. The concert band played on. Zip, went the red carpet again. The Queen started to laugh. Philip hooted.”  Both disembarked, to the sound of the band playing God Save the Queen.

The rest of the visit presumably went off without a hitch. The itinerary included a tour of Bellevue Park, during which the royal couple met the famed Hargreaves quadruplets. As well, the Windsor Park Hotel threw an elaborate luncheon, which included a 5-by-7-foot cake and sugar sculpture in the likeness of the Royal Yacht Britannia that took some three weeks to create; the Globe and Mail was quick to mention that despite being edible, the cake was “to be looked at only.”  Artistic confections aside, the luncheon also provided the Queen an opportunity to talk with Colonel Sydney Penhorwood. And, of course, Queen Elizabeth and Prince Philip also toured Algoma Steel and the canal.

The royal couple left the Sault, having been feted by the city’s residents – although the Sault Star did note that the St. Mary’s River was much calmer during their departure than their arrival.