Lowestoft and the Sault: An enduring wartime bond

This edition of Remember This looks back at a connection that dates back to the Second World War
Nov 11, 2018 11:00 AM By: Remember This? 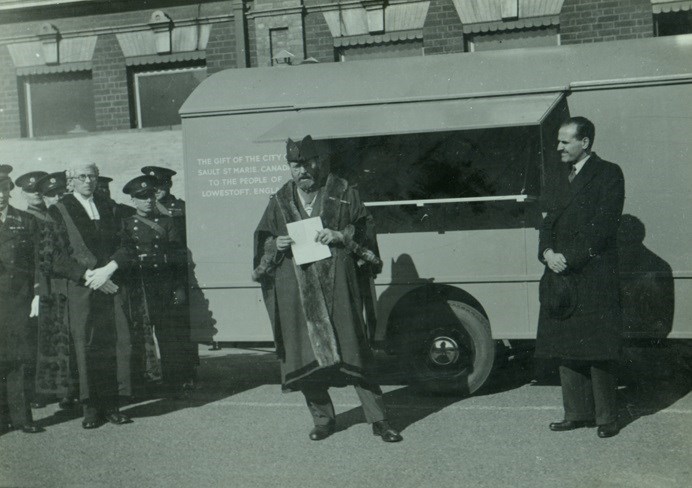 Lowestoft is a town in the county of Suffolk, along England’s east coastline.

An ocean away, it’s hard to imagine what connection might exist with Sault Ste. Marie.  But back in the Second World War, we officially adopted the town.

Throughout the Second World War, Lowestoft was heavily bombed, primarily because of its engineering and naval facilities. According to some claims, it was the most heavily-bombed town by size in England.

With the involvement of the Rotary Club and the approval of municipal government, the plan was quickly put into action. Approximately a month later, Sault Ste. Marie gifted the town of Lowestoft with a mobile canteen. According to Canadian officials, it provided “a personal bond of sympathy with the people of Lowestoft in the ordeal through which they are passing.”

The canteen would provide the town with an easy, portable way of getting hot meals to people.

In March of 1941, the Northmen Male Chorus organized a benefit concert for the British town. Attractions included a male chorus, numbering approximately 65 singers, performing patriotic pieces; an orchestra; a trumpet solo, and several vocal solos; members of the Bruce Mines Male Quartette; two comedy acts; a military pageant featuring a young British War Guest by the name of Barbara Spence; and a draw for a $25 war bond that every attendee had a chance at winning.

All in all, over a hundred people were involved in the concert, which the Sault Star described as “magnificent.”  Articles covering the event described the audience as being engaged – the show brought tears of joy and “roars of mirth.”  Proceeds from the concert went to support Lowestoft.

Throughout 1941, Sault Ste. Marie continued fundraising, this time to purchase a portable X-ray machine for Lowestoft at a cost of over $1,000; the machine was necessary to continue emergency services in the event that the war forced them to move their medical sites. Several hundred dollars were already in the city’s Lowestoft fund; the city directed those funds to the X-ray machine. The Galloping Tea Organization raised hundreds of dollars by hosting fundraiser teas.

In 1944, a special reception was held in Lowestoft for members of the military from Sault Ste. Marie. More than 80 personnel from the Sault were in attendance. For many, it was a glimpse of home and a chance to catch up with friends they may not have seen since they first went overseas. The Sault Ste. Marie guests attended a special reception, meal, dance, and parade; they received free passes to local entertainment.

One serviceman recalled that when he went out to eat for breakfast, he received his meal for free as soon as the owner realized he was from Sault Ste. Marie. Saultites recalled being treated with warmth and gratitude.

The connection between Sault Ste. Marie and Lowestoft did not vanish after the war. In 1947, Sault Ste. Marie sent chocolate to 6,000 Lowestoft children in commemoration of Princess Elizabeth’s wedding. Decades later, some residents still remembered receiving the chocolate – a treat made all the sweeter by the heavy rationing that took place during the war years.

Even into the 2000s, more than 60 years after the initial adoption, the link remained between Lowestoft, with the mayors trading Remembrance Day correspondences. It’s a connection that’s lasted over the years, a story that showcases hope and compassion during difficult times.