Looking back on the Great One's time in the Sault, part two 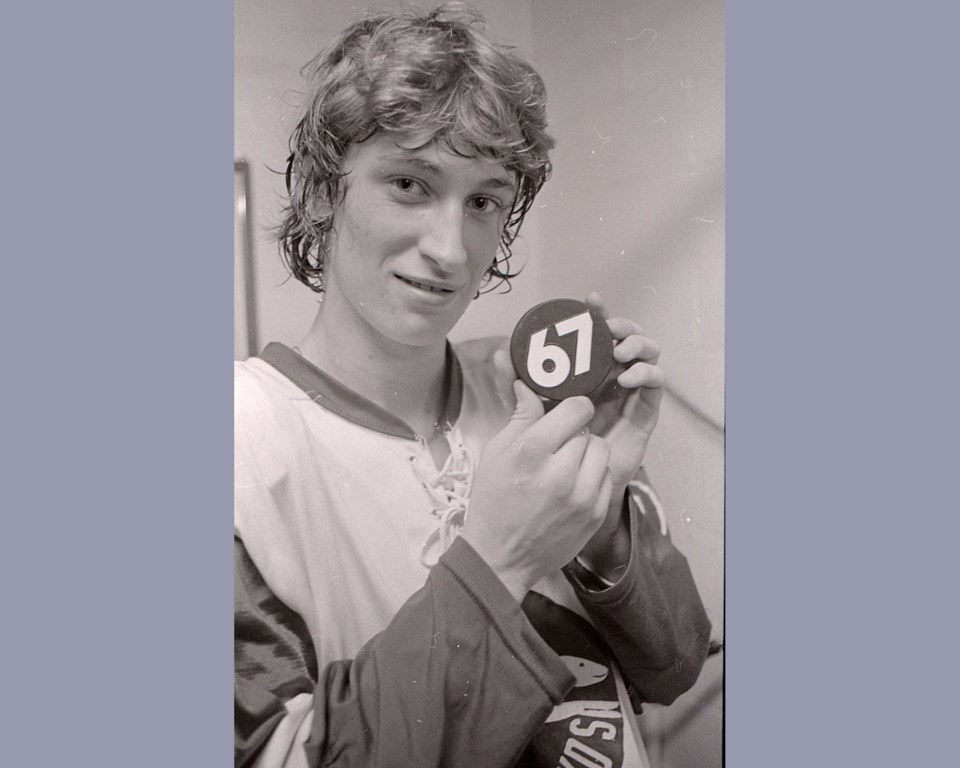 He believed he had no chance at making the team, but that the training camp experience would be invaluable to his development. Unexpectedly he received a spot on the team.

With Bill Delargo of the Brandon Wheat Kings breaking his leg a month earlier, a spot opened for the rookie Wayne Gretzky. Later, Team Canada’s planned first-line centre, Bobby Smith, suffered an eye injury and Gretzky found himself positioned as the country’s number one centre out of sheer luck.

While Gretzky was the youngest player in the 1978 World Juniors, he was also the best skater on the ice. In just six games, Gretzky scored eight goals and tallied nine assists.

During the tournament, NHL scout Torchy Schell shared poor insight, infamously noting “He stick handles and passes really well and knows what to do with the puck. But by the time he’s eighteen he may decide to be a doctor or something or find other interests. Mind you, if he continues playing, he’ll attract a lot of attention.”

Although Canada finished in a disappointing third place behind the Soviet Union and Sweden, Gretzky was awarded Best Forward and All-Star Team honours.

Thanks to the international coverage of Gretzky’s incredible talent, Sault Ste. Marie in turn received a massive spike in media attention. The city’s Chamber of Commerce voted to present the hockey star with an award for his “contribution in bringing prominence and recognition to Sault Ste. Marie” at the World Junior Championships.

However, eyebrows were raised when Gretzky shared his intentions of playing hockey in Sweden in the fall, rather than waiting until 1981 for NHL eligibility.

“I think I need one more year of junior hockey, a year to grow physically and learn a little more hockey," Gretzky said. "But after that, I don’t know what will be left to learn. By then I would have a reputation and I think I would be a sitting duck for other players out there to make a reputation for themselves at my expense. I don’t want that to happen. There’s just too much chance an injury could finish me off before I ever get a chance at the pros.”

Gretzky responded to the backlash, saying he was “terribly” misquoted. He explained how the interview was with a Swedish reporter, and he had discussed taking power skating lessons in Sweden.

Regardless of context, the question was now raised as to whether this would be his final OHA season, and it remained a looming shadow over Sault Ste. Marie.

When Gretzky returned to the Greyhounds, the team was a dismal 11-21-5. Remarkably, even after spending two weeks out of the lineup for the World Juniors, Gretzky was still the league scoring leader.

In January, a Sports Illustrated reporter spent four days following Gretzky and in the published article, he praised the player, saying “Offensively he has terrific puck sense and great anticipation.”

However, in the same breath, the reporter wasn’t afraid to be constructive, noting “Defensively he’s very weak. He’s always looking to break and is constantly leaving his check open. He doesn’t even harass his check.”

Fortunately for the Greyhounds, Gretzky thrived on criticism.

“At his age, there is a lot of pressure on him, (but) he carries it extremely well,” said Bumbacco.

“The more pressure on him, the better he played,” said goaltender Millen. “I would give him the puck behind our net and say, 'Gretz, we need a goal' and often he would go down the ice and get one. It was amazing how good he was.”

During a game in Ottawa, the Greyhounds were trailing 4-1 halfway through the third period.

With the game seemingly over, MacPherson intended to bench Gretzky to rest him for the following night. Instead, a power-play was awarded to the Greyhounds and Gretzky asked his coach, “Do you want me to tie it or win it?”

MacPherson said a tie would be fine. Gretzky hopped over the boards and scored three goals in the final ten minutes to tie the game.

In a 15-3 thrashing of the Wolves, Gretzky scored two goals and four assists. The next day, he scored another hat trick and three assists against the same team.

With the season coming to an end, Smith, the player who Gretzky replaced on the top line at the World Juniors, surpassed Gretzky in goals scored.

As a member of the Ottawa 67s, the best team in the league, Smith was quick to dismiss Gretzky’s accomplishments, saying “There are a lot more important things than scoring titles. If Wayne wins the scoring title, then more power to him. Personally, I’d rather finish second in scoring and be on the first-place team rather than first in scoring on the fifth-place team.”

Soon after, Smith backed up his words with a goal and five assists in a 9-2 beat down of the Hounds.

While Gretzky waged war with the league’s star players for scoring supremacy, losing came all too easy for the Greyhounds. The team would consistently take their foot off the gas and give up multi-goal leads in the third period.

The talented top line was unable to outscore the Greyhounds’ numerous defensive problems, and the team’s playoff hopes dwindled with every defeat.

On Feb. 12, MacPherson resigned from his duties as head coach.

“We blew some big leads this year and we lost some tough games," he said. "We also had crippling injuries but I’m not going to make any alibis, I’m not like that. I came to this city with class and I want to leave that way.”

Focused on team performance, Theriault transformed the structure of the Greyhounds, forcing players to be more defensively responsible. Even the goaltenders alternated starting duties for every game.

Thanks to this dramatic shift, the Soo Greyhounds defied the odds and clinched a playoff berth on March 8.

While Gretzky was used to playing forty minutes per game, under Theriault his ice time was greatly reduced. However, he remained a force to be reckoned with, getting seven assists on March 10 against the Windsor Spitfires.

The following day, Mancini scored a team-record six goals, all assisted by Gretzky. The crowd at Memorial Gardens was deafening, chanting “Wintario” as a victorious nickname for the new head coach.

Heading into the final game of the regular season with 67 goals, Gretzky had tied the league record for rookie goal-scoring set two years earlier by former Greyhound John Tavella.

Gretzky scored his record-breaking 68th goal against Pat Riggin of the London Knights.

In a postgame interview, he said, “[Tom McLeod] dropped [the puck] back to me and I was able to cut to the side of the net. Riggin gave me about eight inches to shoot at and I put it underneath his armpit.”

Gretzky followed up with two more goals, finishing the season with both a hat trick and a new rookie league record of 70 goals. His 112 assists broke the team record for most assists held by Mike Kaszycki.

With a franchise-record 182 points, Gretzky finished in second place for league scoring, ten points behind Smith.

As the league’s top rookie, Gretzky earned the Emms Family Trophy along with the Bill Hanley Trophy for being the league’s most gentlemanly player.

He racked up only 14 penalty minutes for the entire season. More importantly, the Greyhounds finished the final eleven games of the season with an impressive 9-1-1 record.

The team wound up in fifth place for the third year in a row and would play the Kingston Canadians in the first round of the playoffs. Check back next week for the conclusion of this series.