Looking back on the Great One's time in the Sault, part three

Despite breaking his contract to leave, the Soo remembers Gretzky fondly and he speaks highly of both the city and the Greyhounds
Feb 21, 2021 11:00 AM By: Remember This? 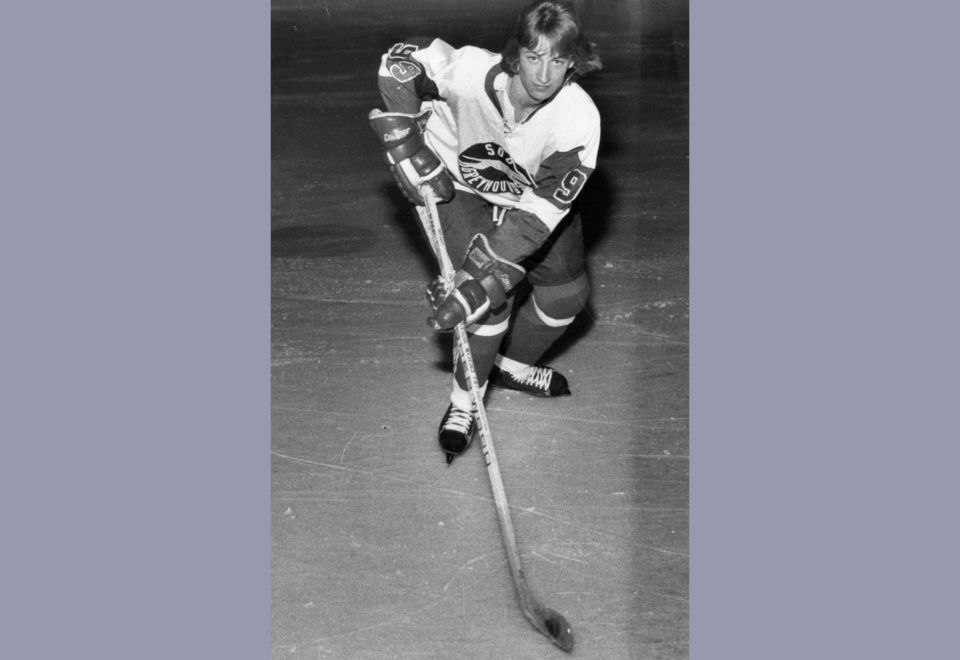 The Greyhounds entered the 1978 OMJHL playoffs with confidence and momentum on their side.

Winners in nine of their final eleven games, the Hounds would face off against the down-trending Kingston Canadians in the opening round.

The Canadians had won just five of their last 20 games, and only two of 13 on the road since turning the calendar to the new year.

The Greyhounds also carried a 3- 2-1 season record over Kingston. However, game one was a heartbreaking overtime loss. Even more worrisome, Gretzky was checked by Behn Wilson, the Canadians’ star defenseman, and knocked out cold.

After experiencing a mild concussion, Theriault was uncertain whether he would be fit to dress for the next game. Amazingly, Gretzky returned with a vengeance in game two, scoring a hat trick in a 6-4 victory.

Earlier in the game, Wilson was thrown out for cross-checking McLeod three times in the back of the head while down on the ice.

The Canadians’ defenseman was suspended for the remainder of the series. Down 1-0 and 2-1 in the series, the Greyhounds rallied back to force a sudden-death game five.

After coughing up a 5-2 lead late in the third period, it appeared the Hounds were falling back into embarrassing habits at the worst possible time. However, the team retaliated to win 6-5 over the Canadians.

The victorious Greyhounds were offered no respite and forced to begin game one of the second round less than twenty-four hours later.

It was the team’s fourth game in four nights. Their opponents, the powerhouse Ottawa 67s, enjoyed a first-round bye for finishing first in the regular season and had spent nine days resting.

The resulting opener was a bloodbath, with the 67s outshooting the Hounds 65-31, demolishing Sault Ste. Marie with a score of 13-3.

In 1978, the OMJHL playoffs were determined by point totals rather than wins. In the second round, the first team to win eight points would advance.

The Greyhounds were expected to lose in five games against the 67s. However, after a 3-1-1 series deficit, the Hounds clawed back to force another sudden-death playoff game.

The Greyhounds were leading 3-2 in the third period of game eight after a momentous Gretzky goal. Unfortunately, with less than seven minutes to play, Ottawa’s Sean Simpson responded to tie the game.

With fifty-one seconds left on the clock, Smith found an open Jimmy Fox from Millen’s net. Fox’s rocket ended the game and eliminated the Greyhounds.

Theriault was confident that #99 could score more than two hundred points the following season, breaking the new league record held by Smith. More importantly, with another year of experience under Gretzky’s belt, and the fifth overall pick in the upcoming draft, the Hounds coach believed his team would be a Memorial Cup contender in the 1978-79 season.

However, on June 11, 1978, Gretzky signed a seven-year $1.75 million personal services contract with the Indianapolis Racers of the World Hockey Association. The news sent shockwaves across the hockey world and mortified the Soo Greyhounds community.

Jim McAuley, the Hounds’ President, was so upset he considered shutting down operations for the next season.

“In Wayne’s contract there is a clause that he has to pay us $20,000 if he turns professional before his junior eligibility is over,” McAuley said, “So we get $20,000. Look what we stand to lose in gate receipts with the likes of him gone.”

Thrilled by his acquisition, Gretzky said “Everything seems to have fallen into place. I wasn’t dissatisfied with playing junior, but I like challenges.”

After only eight WHA games with the Racers, Gretzky was traded to the Edmonton Oilers, where he scored 104 points in 72 games.

At the end of the 1978-79 season, the WHA folded and the Oilers were moved to the National Hockey League.

In 1984, Gretzky earned his first of four Stanley Cups.

After Gretzky’s departure, the Soo Greyhounds spent the next two seasons at the bottom of the league. However, in 1980-81 the team topped the OMJHL standings and reached game six of the finals.

The rollercoaster of the decade that followed featured a record-breaking regular season, numerous trips to the Memorial Cup Tournament, heartbreaking defeats, several years bottom-feeding, and a fairy tale ending in 1993 where the Greyhounds hosted and hoisted the Memorial Cup.

The same year, Gretzky became the first of only five players in Greyhounds history with a retired jersey hanging from the rafters at Memorial Gardens.

In B.M Lloyd’s book, The Soo Greyhounds Share the Dream, Gretzky provided the Preface for the book.

Reflecting on his season in Sault Ste. Marie, #99 concluded “Recalling the many friendships formed and the encouragement of the fans – despite those frigid winters – provides me with a lot of great memories of the Soo Greyhounds. I’ll never forget the sound of ‘GO HOUNDS GO’!”

Each week, the Sault Ste. Marie Public Library and its Archives provide SooToday readers with a glimpse of the city’s past.