Looking back on the Great One's time in the Sault, part one

From right out of the gates with the Greyhounds, Wayne Gretzky distinguished himself as a great playmaker
Feb 7, 2021 11:00 AM By: Remember This? 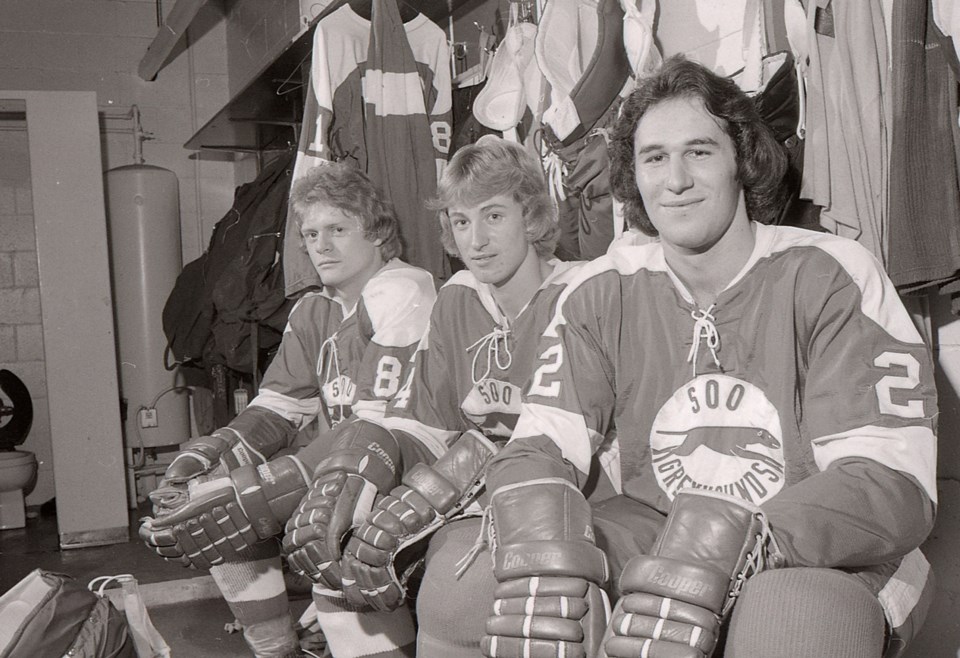 Long before he was named “The Great One” for winning four Stanley Cups, scoring a record-breaking number of goals, tallying more assists than the total points of any other NHL player, and being considered the greatest hockey player of all-time, Wayne Gretzky was a Soo Greyhound.

Standing at 5 feet 8 inches, and weighing 155 pounds, Gretzky was a small but talented hockey prodigy.

Born and raised in Brantford, Ontario, by the age of 10, Gretzky had scored an astounding 378 goals in a single season with the Nadrofsky Steelers. As a teenager, Gretzky played in Junior B for the Seneca Nationals where he tallied 132 points in 60 games.

Despite being touted as the best player since Bobby Orr, Gretzky was passed up not once, but twice at the OMJHL draft. Tom McCarthy was selected first by the Oshawa Generals, while Steve Peters was drafted second by the Niagara Falls Flyers.

Remarkably humble for someone of his talent, Gretzky expected himself to be drafted three picks later by the Peterborough Petes. The Gretzky family was cautious about uprooting their son’s life and moving him eight hours northwest to Sault Ste. Marie.

Rumours swirled that Gretzky would not report to the Greyhounds. However, General Manager Angelo Bumbacco spent a considerable amount of time with the player’s father, Walter Gretzky, and convinced the family to give the city a shot. With the promise of four years tuition at any North American University, if he was cut from the team or injured, Gretzky signed with the Soo Greyhounds on Aug. 16, 1977.

With Sault Ste. Marie reminding him of Brantford, Gretzky quickly became comfortable in his new home. However, he wasn’t prepared for the Northern Ontario climate. During a particularly chilly day in August, Bumbacco purchased Gretzky a winter coat, after the star claimed he had no warm jacket for the months ahead.

Gretzky appreciated the generosity and gained immediate respect for his new hockey club. After finishing third-last in the league in 1976-77, the Greyhounds had high aspirations for a turnaround season.

With the 1978 Memorial Cup tournament scheduled to be hosted by Sault Ste. Marie and the Sudbury Wolves, the Greyhounds hoped to be competitors. Heading into the new season the team’s coach, Muzz MacPherson noted, “We’ve got a great nucleus, good talent. We don’t have a championship team right now... We’re still two players away, but we’re close.”

The Greyhounds’ top line was notably stacked, with Gretzky centring two 19-year-old veterans, left winger Paul Mancini, and right-winger Dan Lucas. The trio immediately emerged as one of the most dominant lines in the league.

Greyhounds goaltender Greg Millen explained, “I think that Danny would be the first person to tell you that Wayne turned him into both a 50-goal scorer and a first-round pick and Paul would tell you the same thing about being a 50-goal scorer.”

In the Greyhounds’ first exhibition game of the season, Gretzky exceeded expectations, scoring one goal and five assists against the Sudbury Wolves.

His elated coach responded, “He’s certainly provided, he’s an outstanding playmaker. You can’t say enough about him, he handles the puck so well.”

Unfortunately, team captain Craig Hartsburg suffered a leg injury during the annual Red-White exhibition game on Sept. 4, leaving the team without their best defenseman until Nov. 18. However, even without Hartsburg, the Greyhounds finished the exhibition round with a promising 6-1-1 record.

Four minutes and forty-three seconds into the first regular game of the season, Gretzky scored his first OMJHL goal - a beautiful backhand over Georges Gagnon of the Oshawa Generals.

Six minutes and thirty-seven seconds into the second period, Gretzky completed his first hat trick. He ended the night with an additional three assists in a 6-1 victory.

In the exhibition series, Gretzky wore #19 on his jersey and played the first game of the season wearing #14. He wanted #9 in honour of his favourite player, Gordie Howe, but teammate Brian Gualazzi already wore the number.

Bumbacco suggested Gretzky take a page from former Greyhound Phil Esposito, who after being traded to the New York Rangers could not wear #7 because it was already taken. Instead, Esposito doubled the number and picked #77.

Bumbacco recalled, “I told Wayne and his father Walter if that was good enough for Phil, why not have Wayne switch to 99?”

Aside from a select few players, hockey jersey numbers higher than thirty were almost unheard of. However, according to MacPherson, the players figured that Wayne would attract enough attention during the season just from his play, so an unusual sweater number wouldn’t make any difference.

Starting from the second game of the season, #99 was stitched across Gretzky’s back, becoming his legendary number.

Opening the season with 75 points and a tremendous 23 game point streak, #99 was the early league scoring leader. As a result, no matter where the Greyhounds played, Gretzky attracted the largest crowds in the OMJHL. Attendance at the Memorial Gardens alone doubled from the previous year.

This humble superstar was quick to temper fan expectations, saying “I know they expect a guy like Orr, but this is my first year of Junior A hockey. I sort of played that style in Junior B with players my own age and size. I’m still young. I don’t control a game like Hartsburg, but when I get to his age (18) maybe I’ll be good enough to control it.”

Gretzky’s success on the ice brought relentless media attention. Wayne was asked for so many interviews, he famously asked one reporter for breakfast in return.

Even being featured in New York Times, The Toronto Star, and on CBC’s Hockey Night in Canada, Gretzky was always comfortable with the media, noting “Really, It’s not all that bad. It was more hectic when I was 10."

Unfortunately, while Gretzky was on the rise, the Greyhounds struggled out of the gate. The team was underachieving and losing far more games than winning.

While the top line dominated on the scoreboard, the elephant in the room was defensive structure or lack thereof.

The Greyhounds also lacked physicality, causing players to be battered, bruised, and shell-shocked within minutes of starting a game. When the team retaliated, they were penalized, and opponents would capitalize far too often on the ensuing power-play.

To no one’s surprise, the Hounds spent thirty-five consecutive days in last place.

Making matters worse, on Oct. 21, Gretzky’s playing card was revoked by the Ontario Hockey Association after it was informed by the Seneca Nationals that no agreement regarding Gretzky’s rights to the Greyhounds had been reached.

The Nationals were claiming that legal fees plus room and board for Gretzky amounted to over $9,000 during the two years he played in Junior B.

Fortunately, the dispute was deemed incorrect by the Canadian Major Junior Hockey League, and the Greyhounds paid the agreed-upon $1,500.

Although Gretzky’s player card was revoked for two games, he missed no ice time, as both the Ottawa 67’s and the Peterborough Petes promised not to protest if #99 dressed.

On Nov. 30, the Greyhounds defeated the Wolves for the first time in four years as visitors. Gretzky’s game-winning goal ended the humiliating 12-game losing streak dating back to Nov. 19, 1974.

To cap off the momentous victory, that night Gretzky received an invitation to Team Canada’s World Junior Hockey Championship training camp. Check back next week for more on Wayne Gretzky’s local hockey career.