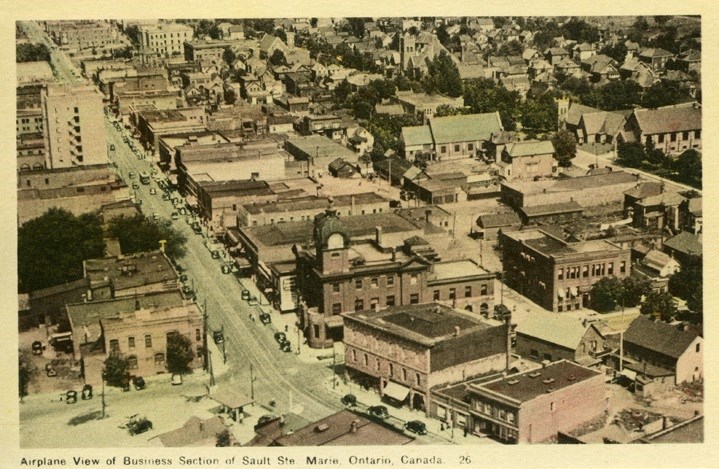 At the height of its popularity, the Sault Express declared itself the “leading liberal newspaper of the district.”

At its lowest point, it was the centre of a national controversy over war, recruitment, and free speech when it became the first Canadian newspaper seized by the official press censor.

The newspaper had its origins in 1887, under the guidance of W. D. Kehoe, editor and publisher. At that point, it was one of three newspapers in Sault Ste. Marie, the other two being the Algoma Pioneer and the Northern Light. The Sault Star’s predecessor, the Sault Courier, would not begin publication until the 1890s.

Approximately ten years later, the Sault Express came under new ownership, purchased by Charles Napier Smith, a journalist who originally hailed from Tapleytown, Ontario, now part of the city of Hamilton. He had a background in journalism, having already worked for The Globe for a time.

On June 23, 1916, the Sault Express ran a front-page editorial decrying the violence of World War I and condemning the further recruitment of soldiers – perhaps not unexpected for a newspaper that had already called for peace in previous articles.

The author, paper editor Charles N. Smith, urged that Canada “should not send any more of her sons overseas to engage in this frightful cataclysm,” declaring that too much blood had been spilled already, that Canada had “done more than enough” at Ypres, and that England should draw their troops from India rather than Canada. The editorial further urged “Canadians to wake up,” saying that the nation would be better off “pursuing her own ideals and minding her own business on this side of the Atlantic.”

In a society of patriotism and support for the war effort, this journalism did not go over well.

The first sign of trouble came the following day, when news broke that Postmaster Adams was refusing to allow the newspapers to be delivered. This decision was made under the direction of the Sault’s federal Member of Parliament A.C. Boyce who had the “strongest feeling that [the] article [was] inspired by enemies” and thought it best that it be suppressed.

As for the accusation that there was some enemy involvement in the editorial, this was something that Smith would later vehemently deny. He said that he wrote the article himself, with no outside input. There were rumours that the article had been written in the United States, but the Evening News had it “on good authority” that this wasn’t true.

Smith apparently had said, “I wrote it myself for what I believed, and still believe, to be for the good of the Canadian people.”

Regardless of its origin, the editorial was in print for people to read, and people were acting in response. The Postmaster held all of the offending issues at the post office and was waiting for further instruction on the matter; when Editor Charles N. Smith from the Sault Express requested their return, the Postmaster refused.

Smith disagreed that the editorial was dangerous, quoted in the Sault Star as saying that the article “was written from an impelling sense of duty as a Canadian, and we feel that we did no more than give voice to the things which so many of our people are thinking, yet fear to express.”

Rumours started to fly, including some from news outlets in Michigan: that Canadian soldiers were threatening Smith, that a plot had been foiled to destroy the newspaper plant, that his typesetter was taken to Toronto by the authorities, and that Smith was suing the Postmaster for not delivering his papers.

When the Sault Star caught up with Smith, he wasn’t able to confirm most of the rumours. His typesetter had gone to Moose Jaw for work, and Smith himself had no intentions of leaving town as a result of the controversy. However, he had filed suit against the Postmaster, for $50,000.

Nothing much would come of this lawsuit. The general consensus was that rather than causing damages to Smith by refusing to mail his newspaper, the Postmaster actually prevented him from causing further harm.

However, not only did the Postmaster cease delivery of the newspaper, he also worked with local government officials, the police, and the military to inform the federal authorities. He waited for an answer from Ottawa on what to do with the newspapers.

Five days after the editorial was published, the answer from Ottawa came – in the form of soldiers.

Check back next week to find out what happened next!