Let's talk about the waterfront chimes and the Chief Wawatam

This edition of Remember This delves into the history of a familiar piece of public art
0
Sep 15, 2019 11:00 AM By: Remember This? 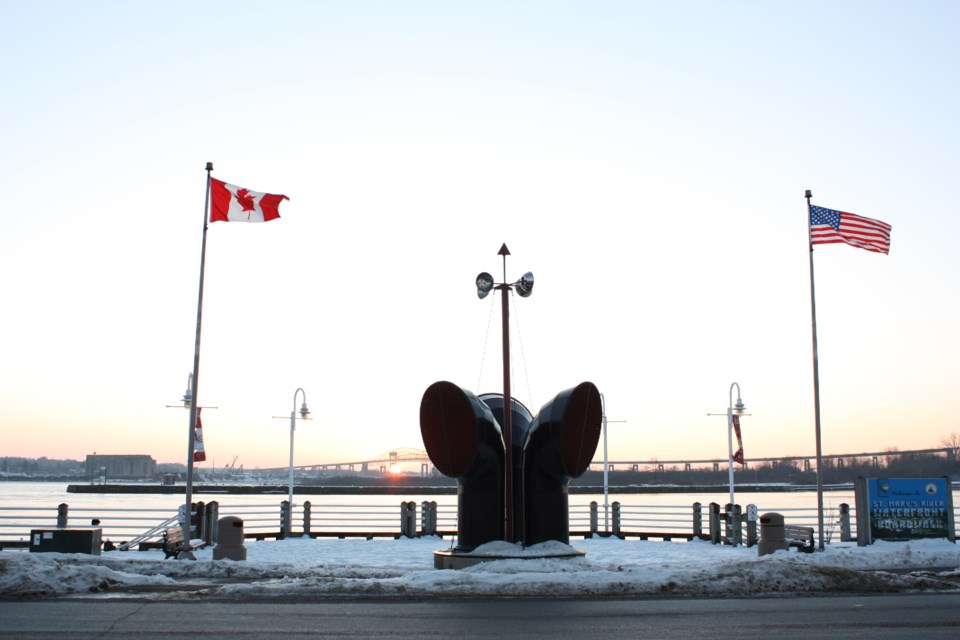 The chimes are a familiar sight on the boardwalk. Sault Ste. Marie Public Library archive

If you’ve walked along the boardwalk near the Station Mall, you’re likely familiar with the wind chimes: a large, musical art installation fashioned from parts of a ship. They’ve been a staple on the waterfront for over 20 years; however, the history of the chimes stretches back for more than a century.

In the late 1800s, the Straits of Mackinac posed a challenge for the railroad. Needing to connect the various railroads in Michigan, the Mackinac Transportation Company began ferrying train cars across the water: first by steamship, then by barge. Due to the increase in rail traffic, and the cold winters, the transportation company began developing icebreaking railroad car ferries, the best known of which was the S.S. Chief Wawatam.

Built in Toledo in 1911, the ship was considered the largest and fastest of its kind. She was outfitted with electricity and a comfortable interior design – so comfortable, in fact, that one crewmember said he would work in his bedroom slippers. Her namesake, Chief Wawatam, was an Odawa Chief who lived during the 18th Century. He famously aided fur trader Alexander Henry after he was captured at Fort Michilimackinac, saving Alexander Henry’s life.

At the time of the ship’s construction, she was considered the largest and fastest of her kind, able to carry up to 26 freight cars at once. Her engine ran by burning coal that had been fed by hand, making her a “hand bomber.”

Five thousand people turned out to watch the ship’s launch, and within a couple short months after that, she began work in the straits: ferrying both freight and passenger railway cars and, come winter, breaking the ice that built up.

Despite a few close calls with storms and dangerous waters – including the Great Lakes Storm of 1913 – much of the S.S. Chief Wawatam’s history went without incident. In 1922, she found herself largely held up by the ice for three weeks, an event that, according to the book Chief Wawatam, became known as “the year the ‘Chief’ was stuck all winter.”

She had to be freed with dynamite – on more than one occasion.

Throughout her history, the Chief also became involved in more substantial ice breaking operations, hired by the Lake Carriers’ Association to clear waterways for freighters starting in 1937. On many occasions, Saultites may have gotten a glimpse of the ferry passing through the locks here. Throughout the 1940s, due to an increase in motor vehicle traffic, the Chief also began ferrying automobiles across the straits.

In the 1950s, the use of more icebreakers and automobile ferries meant that the Chief largely went back to her original tasks of transporting railway cars. With the building of the Mackinac Bridge and the potential to transport goods over the straits by way of truck, even those duties decreased.

In 1968, The Chief was retired for the first time, with a tug and barge taking over the task of ferrying railway cars; officials cited a decline in revenue as the reason for the change. In less than a year, she was back, only to retire again in 1984 – this time, for good.

At the time of her retirement, she was considered to be the only boat on the Great Lakes that still ran on hand-fired coal. She was also the last of the automobile and train freights on the Straits of Mackinac. And, because of her age and the fact that much of the original equipment had never needed to be replaced, she was seen as somewhat of a historical artifact.

A few years later, the Chief was purchased by Purvis Marine, to be dismantled and rebuilt as a barge; the refurbished barge is still listed as part of their fleet today.

Purvis Marine donated vents from the ship to the city which, in 1990, announced the plans for the art installation. Those ferry vents, together with an underground space for chimes and a weather vane, now make up the waterfront’s wind chimes installation.

The chimes were designed by Michael Burtch, then Director of the Art Gallery of Algoma, and architect Chris Tossell, with Burtch saying that “the composition of the sculpture seemed to suggest itself,” according to the book Views of the Sault by Heather Ingram.

Living close to the water inspired Burtch to integrate shipping parts, evoking the feeling of traffic on the river. The metallic chiming sounds serve as a connection to days when steamships would traverse the water, running on coal shoveled by hand – and as a reminder of the grandeur of an ice-crushing, train-carrying, coal-burning, hand-fired ferry, the last of her kind.

Mysterious letters and mysterious strangers. Had the notorious Black Hand arrived in the Sault?
May 31, 2020 11:00 AM

Thousands of children infected during the great ringworm epidemic of 1950
May 17, 2020 11:00 AM
Comments
We welcome your feedback and encourage you to share your thoughts. We ask that you be respectful of others and their points of view, refrain from personal attacks and stay on topic. To learn about our commenting policies and how we moderate, please read our Community Guidelines.