How a 'floating palace' ended up a charred wreck

This week, Remember This looks back on the passenger ship Noronic, which was a frequent visitor to the St. Marys River
Oct 21, 2018 11:00 AM By: Remember This? 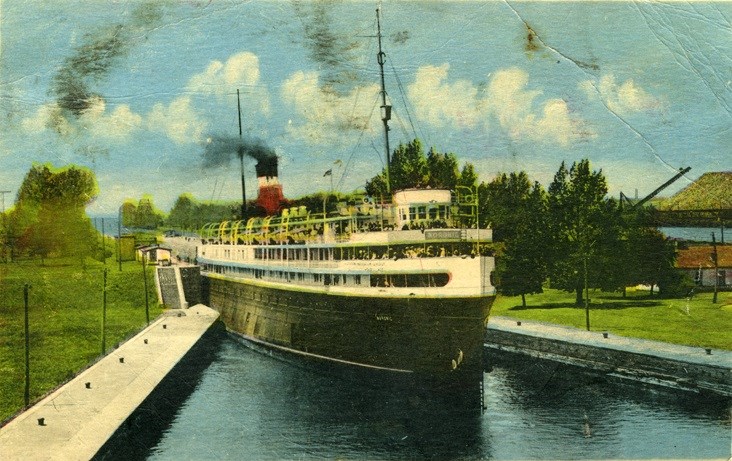 For years, the S.S. Noronic was a familiar sight in Sault Ste. Marie.  A passenger ship that toured the Great Lakes, she regularly went through the Soo Locks, bringing crowds of tourists on lake cruises.

The Noronic was launched in Port Arthur in June of 1913, to an audience of more than ten thousand. She was the largest passenger steamer on Canadian lakes at the time of her launch, with a maximum capacity of 600 in first class, 240 in second class, and 200 crew members.

Known as the “Queen of the Great Lakes,” she spent 30 years as a luxury ship. Her five decks featured lush carpets, hardwood flooring, ornately-carved panelling, chandeliers, ballrooms, and fine furnishings, and she was described retrospectively in the Globe and Mail as “a floating palace.”

Menus from the Noronic provide a picture of what guests would have eaten while aboard. The items are varied – from frankfurters and sauerkraut, to boiled fresh halibut in lobster sauce, to roast young milk-fed chicken and baked macaroni and cheese.

On Sept. 17, 1949, in the early hours of the morning, disaster struck while the Noronic was docked in Toronto. A fire started in a linen closet around 2 a.m. and, upon its discovery, couldn’t be put out with the trickle of water coming from one of the ship’s fire hoses. Within less than half an hour, fed by the varnish, paint, and lavish interiors, the blaze had become an inferno.

Panic broke out on the ship as word of the fire spread. Some passengers scaled down the side of the ship on blankets tied together by crewmembers. Others were forced to jump from the ship into the lake; at least one hit the water with her hair and clothing ablaze, while two others drowned.

While most were desperate to get off of the ship, others were frantically trying to return to help save loved ones. Police had to handcuff some passengers to keep them from going back into the flames.

Surviving passengers were shell-shocked by the disaster; hundreds suffered injuries, including severe burns.

All members of the crew survived the burning ship. The exact number of passenger deaths is recorded at 118, although there is some debate regarding whether that number should be higher. Most of the deceased were American tourists.

For those who did not make it out, dentists and other medical professionals had to be brought in from across the continent to assist in identifying the bodies; the names of some of the victims are still unknown.

Counted among the survivors were two Sault Ste. Marie women. Mary Wanet was a crew member on the Noronic; Mrs. C. R. White was a passenger who had disembarked the ship a couple of hours before the fire broke out.

The fate of the Noronic became a notorious ship disaster. No longer a glamorous site on the Great Lakes, the charred remains were sold for scrap.  The passenger ship would never again be seen going through the Soo Locks.