In this edition of Remember This we learn of the ill-fated marriage of Gladys and John Hampshire
Sep 22, 2019 11:00 AM By: Remember This? 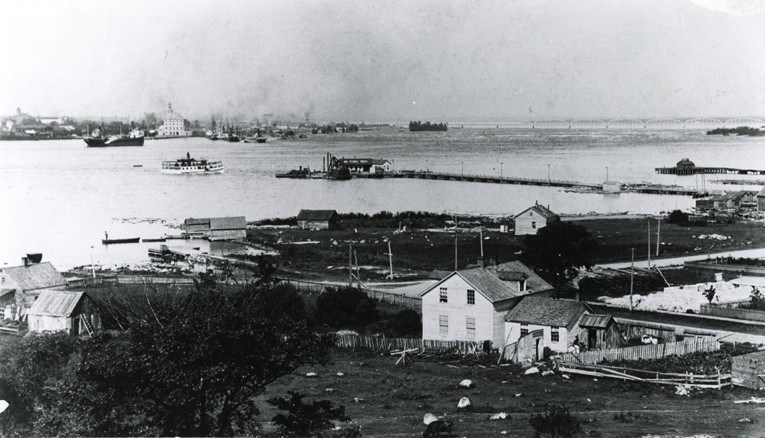 The ferry between Sault, Ont. and Sault, Mich. is pictured in this Sault Ste. Marie Public Library archive photo

The St. Marys River plays an important role in our city.  It is the site of an international border, and a major shipping channel.  And in 1933, the St. Mary’s River also became the meeting place for a pair of star-crossed lovers who captured people’s hearts and sympathies.

Gladys (Mary) and John Hampshire were a married couple in their late 20s.  He was American by birth; she was Canadian and had other family members living locally.  Apart from some run-ins with the law, there was little to indicate the attention they would receive or the troubles they would soon face.

In November of 1933, a Sault Star column, (penned under the name N. E. One), described “a pitiful case” found aboard the ferry Agoming, “one of the most pathetic meetings that the Sault has known.”

A young couple, the Hampshires, spent the evening on the boat, travelling back and forth between Sault Ste. Marie Ontario and Michigan. When it came time for the ferry’s last trips of the night, they both left: John on the American side, and Gladys on the Canadian side.

Details came to light, painting a more accurate picture of what had happened and why.  Because Gladys had spent time in the Mercer reformatory – Canada’s first women’s prison, located in Toronto – she was unable to enter the USA.  Conversely, John had just served a 16-month sentence at the reformatory in Burwash, near Sudbury, and was being extradited to the USA. Not much was known about why she was in a reformatory, apart from that it was for “an error” that had her branded “an incorrigible” when she was sixteen; he was sentenced for stealing gasoline from the Department of Northern Development.

The two found themselves “effectually ‘divorced’ by the immigration laws of Canada and the United States.”

They now lived in separate countries and found themselves unable to visit each other; each person’s country found their spouse to be an “undesirable person” and would refuse them entry.

However, there was a loophole: the Hampshires might have to stay on opposite sides of the river, but international waters were fair game.  The couple took to meeting on the ferry that travelled between the twin Saults.  It was here that they first caught the eye of a Sault Star writer, and the story spread from there.

The couple was profiled in the Sault Star, with a reporter sitting down with John at his temporary living quarters in the Belvidere Hotel in Sault Ste. Marie, Michigan.  He spoke of his hope that he would be reunited with his wife, saying, “All we are asking is a chance to make a new start and live as man and wife should. I paid the price for the one mistake of my life, surely I am entitled to make good and to support my wife.”

He also outlined the trials they had faced.  The two had married in 1931 and opted to live in the United States.  However, as the Depression worsened, finding work proved a challenge.  They moved to Canada, hoping for better job prospects. However, his initial goal of working as a gardener and performing other manual labour was barely enough to keep them afloat.  As an American citizen, he was ineligible for relief in Canada . . . and she was ineligible for aid as well, since she had married an American.

Then, of course, came the gasoline theft, his time in Burwash, and his deportation order.

The Star also interviewed Gladys, from a house on Hamilton Avenue; she was staying with a couple who had taken her in during John’s sentence; the couple, through helping her, risked losing the relief they received themselves.

Much like John, Gladys spoke of her desire to reunite with her husband and start afresh.

“All I ask right now is the right to get away from here, to make another try, to get another chance at life without having my mistakes continually recalled to me,” she told the reporter.

Attempts to work things out with immigration officials, however, proved to be fruitless.  Gladys and John resorted to meeting regularly on the ferry, with the captain affording them access to the engine room so they might have a bit of privacy.  As time went on, they became more despondent and hopeless. In December, Gladys told the Sault Star, “[T]hey are going to fish me out of the river. That seems to be the only thing left for me now.”

The story travelled well beyond Sault Ste. Marie, with the Globe and Mail picking up the article.  The Hampshires captured people’s sympathies at least as far as Texas, where one concerned fellow contacted them to suggest a house boat.  He estimated it would cost $200 to build.  If they couldn’t live as a couple in Canada or the USA, then why not take further advantage of the international waters and live there permanently?

There were even discussions of movie rights.  Paramount and Universal sent in crews to record Gladys and John reuniting on the ferry.  The money that they made off the films — and it was apparently a meagre amount — went towards John’s room and board in Sault, Michigan.

A heartbreaking scenario soon got worse.  With winter’s arrival and the river icing over, ferry service was at risk of being suspended.  Not sure what else to do, they had their last meeting on Dec. 17, and John left for his home state of Indiana, hoping to find work.

And so ended what the Globe and Mail called “the strange ferryboat romance of John W. Hampshire . . . and his wife, Gladys Mary Ellis Hampshire.”

It’s not clear what ultimately became of the two doomed lovers.  According to the city directories, Gladys lived alone in Sault Ste. Marie for a short while, but her house eventually stood vacant.  Perhaps they divorced and she remarried, perhaps she moved in with family members . . . or perhaps she found a way to reunite with her husband once again.