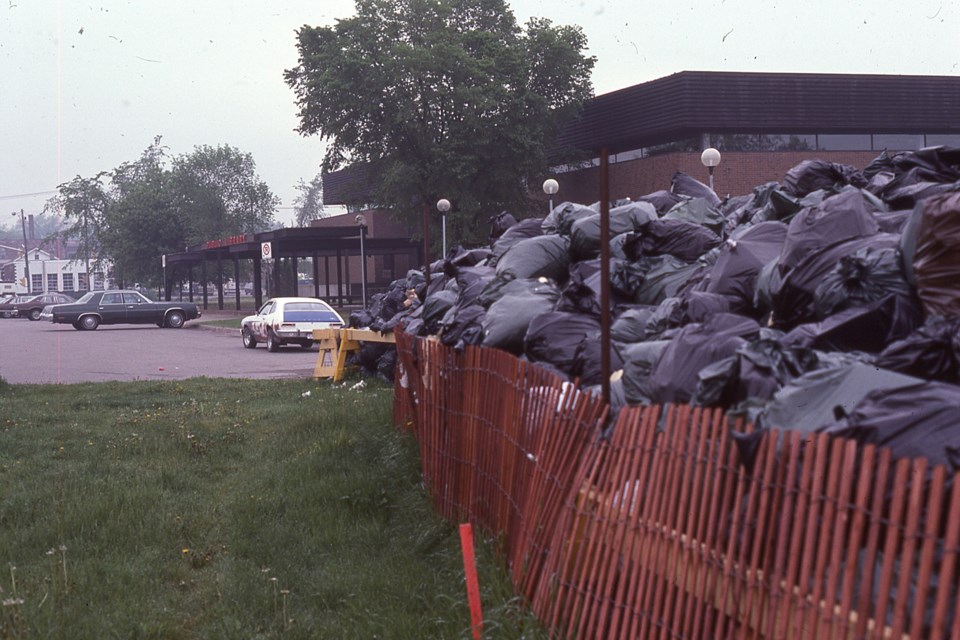 Garbage piles up during the summer of 1979 at a temporary collection site near the Centennial Library. Sault Ste. Marie Public Library photo

Longtime residents of Sault Ste. Marie may recall a foul smell in three areas of the city during the summer of 1979.

The cause: temporary garbage dump sites for city residents.

On April 11, 1979 municipal employees began what would turn out to be a five month work stoppage.  The breakdown in negotiations included members of CUPE Local 3 and Local 67.

Approximately 160 employees of the Board of Works went on strike first. Their primary responsibilities included street services, maintenance and garbage collection. Within days, city administration put into place a work-around for residents who would no longer have their trash picked up. Residents were able to drop off their trash at one of three locations, East Street, south of the Main [Centennial] Library; the Pine Street Marina; and Everett Street at the city’s eastern limit.

However some residents continued to have their garbage picked up throughout the work stoppage since Cherokee Disposal & Construction Limited was under contract for the city streets in the former townships of Korah and Tarentorus. Therefore residents in these areas were unaffected by the stoppage of garbage pickup by municipal employees. Commercial garbage pickup had to be arranged by the individual businesses.

The garbage drop-off locations were monitored by Pest Control Officers, attendants, and security guards. There were measures taken to control rats and flies but as the weeks went on throughout the summer, the odour permeated the surrounding areas. Due to the increasing pest and odour issues people wanted the garbage moved from these sites but it was reported that it would be too difficult to move the garbage to another location.

Staff at the sites also dealt with attempts by some to dump commercial refuse and garbage outside the hours of operation.

A newspaper article described reports of people dumping garbage on private land in rural areas, an infraction of the Environmental Protection Act.

The number of striking employees grew as Community Services Board – CSB employees began strike action on May 3. The group of approximately 60 members of CUPE Local 3 worked at the Memorial Gardens, McMeeken Centre, Queen Elizabeth Pool, city parks and cemeteries.

Approximately one week later, 120+ employees from the Civic Centre, Local 67 joined the strike. Then in early September, four members of the Parking Clerical staff, Local 67 added to the number of municipal employees without a contract.

Members from all of the municipal groups worked out a tentative agreement during talks in Toronto in early September. The agreement was ratified and on September 17, 1979 garbage pickup resumed and to the relief of the local neighbourhoods the garbage dump sites were finally removed.

The breakdown in negotiations provided media outlets with stories of wrong doings on both sides of the dispute. It was reported that roofing nails caused an increased number of flat tires for vehicles using the Fifth Line dump. One contractor reporting 14 flats during a two week period compared to six flats in the previous four years. A confrontation at the Greenwood Cemetery was filmed by striking members. It was also reported that city police had an increase in overtime during this strike period.

During this five month period in 1979 the city supervisory staff provided basic services which included feeding the animals at Bellevue Park.

The animals at Bellevue Park, remember those days? But that’s a story for another day . . .