Edith Cavell: The British nurse whose heroism inspired the Sault

She may never have set foot in the city, but her efforts to save Allied soldiers during the First World War earned her high praise from locals, writes the Sault Ste. Marie Public Library, in this edition of Remember This
Dec 29, 2019 11:00 AM By: Remember This? 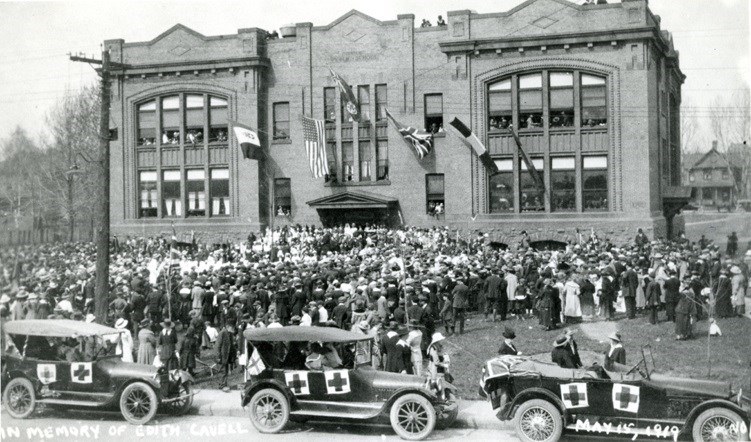 Students from both sides of the St. Marys River turned out on May 15, 1919, to honour Edith Cavell in front of what was at the time Central School. Sault Ste. Marie Public Library photo

Edith Cavell, a WWI British nurse, may seem to have little connection to Sault Ste. Marie. However, her story so touched the city that her memory was honoured in two major ways.

Edith Cavell was born in 1865, in the Norfolk area of England. The child of a minister, she worked as a governess, a position that allowed her to visit Belgium and become fluent in French. She then changed career paths, opting to study nursing, at which point she returned to Belgium as matron of the country’s first training hospital.

After war broke out in 1914, she remained in Belgium, an Englishwoman in what became enemy territory. The hospital where she worked expanded its role: not only did it treat civilians, but it also began to treat soldiers as well, regardless of which side they fought for. Cavell began smuggling Allied soldiers out of the German-occupied Belgium, becoming part of an underground network. She saw the work as an extension of her nursing duties, another way that she could protect the well-being of her patients.

While she faced great personal risk, she was quoted as saying that if she was found out, “we shall all be punished, whether we have done much or little. So let us go ahead and help as many of these men as possible.”

In August of 1915, after helping approximately 200 soldiers escape, Edith Cavell was arrested by the Germans. She stood trial, wearing her Red Cross Nursing Sister uniform. She was condemned to death and, in October, was executed by firing squad. According to the Sault Star, all of the soldiers in the firing squad “aimed high and left the woman standing unharmed, and then she swooned and fell.” An officer then shot her in the head, killing her.

Her death galvanized the allied forces, encouraging more soldiers to enlist. Her bravery and dedication were held up as an example – including to students in Sault Ste. Marie.

To avoid confusion, Steelton Central School was renamed Edith Cavell School. The Globe and Mail reported that, the renaming was “in the hope that the associations of the name may have a beneficial influence on the pupils.”

In May of 1919, Edith Cavell’s remains, initially buried in Belgium, were returned to the UK. She was given a state funeral at Westminster Abbey. Services to honour her memory occurred on this side of the pond as well, including a major procession and ceremony in Sault Ste. Marie.

The Sault Star reported that on the morning of Cavell’s funeral, all schools in the area planted a memorial tree, maple or elm, in Cavell’s honour. The tree-planting was part of a ceremony that saw clergymen speak to students, “impressing on their minds [the] sacrifice made by the heroic nurse.” Students also sang as part of the event.

However, the most significant service took part at Central School later that afternoon — confusingly, not the school that had been renamed in her honour. Students from across all Sault Ste. Marie schools attended en masse: the Sault Star estimated 4,000 students, including a contingent of high school boys from Sault, Mich., and upwards of 2,000 additional adults. There were numerous cadets and bands in attendance. There were also nurses present, two of whom had served on the battlefield; there was also a group of schoolgirls, all wearing the uniform of the Red Cross nurses.

Participants paraded through town, led by Sgt. Merrifield with a Union Jack flag and a Michigan cadet carrying an American flag. Children carried flags in what the Sault Star described as “a galaxy of colour.”

Upon arriving at the school grounds, the audience sang O Canada. It was reported that while the weather was foreboding, upon singing the lyrics “beneath thy shining skies,” the sun suddenly “burst forth.” There were speeches by prominent local figures, including Judge Stone, Mayor Boyd, church leaders, and representatives from school boards on both sides of the river.

During the main part of the ceremony, a row of maple trees and a single elm tree at the front of Central School were dedicated to the memory of Edith Cavell. The school nurse, Miss K. Templeton planted the lone elm, to symbolize one nurse honouring another.

Edith Cavell School has since been torn down, replaced first by S.F. Howe and now the Northland Adult Learning Centre. The elm is no longer outside of the Algoma District School Board office on Albert Street. However, her memory lives on, a pioneer in the nursing field whose execution affected people on both sides of the Atlantic, including in Sault Ste. Marie.