This edition of Remember This examines a British geologist's account of life in the Sault during the fur trade
Apr 28, 2019 11:00 AM By: Remember This? 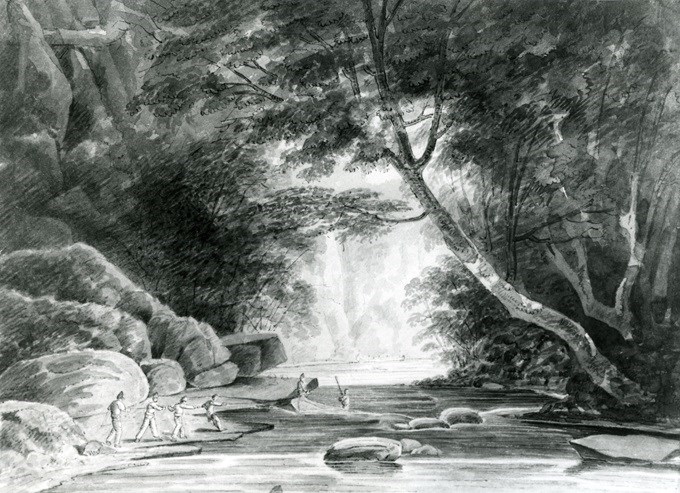 Dr. John Jeremiah Bigsby was born in Nottingham, England in 1792.  Following in his father’s footsteps, he attended medical school and served as a surgeon in the military.  After a tour in South Africa, he then went to British North America in 1818, assigned to deal with a typhus epidemic.

It was while in British North America that his interest in geology flourished. In 1819, he was sent on a tour of Upper Canada, collecting geological specimens and documenting the plants and wildlife. One such tour turned to another, and soon Bigsby was publishing accounts of his field experiences and becoming well known in the field of geology.

In addition to documenting the physical landscape, Bigsby wrote a memoir entitled, The Shoe and the Canoe in which he also documented the social landscape – including Sault Ste. Marie in its fur trade days.

In these memoirs, Bigsby recounted how he met a Sault Ste. Marie resident along the Mattawa River. While at Portage Talon, Bigsby “stumbled upon a pleasing young lady, sitting alone under a bush, in a green riding habit, and white beaver bonnet.”

So stunned was he by her presence, he would later describe himself as “transfixed,” convinced he was having some kind of vision of a fairy shepherdess.

The woman was apparently “very much amused” by Bigsby’s confusion.  She soon introduced herself as Frances, the 18-year-old daughter of Mr. Charles Ermatinger.

She was in the area travelling with her father. Bigsby’s astonishment at her continued, he would later praise her grace, noting that the collection of items in her boudoir spoke to her educated upbringing – and also commented that “she seemed mosquito-proof.”

Bigsby would cross paths with the Ermatingers again, this time along the St. Marys River.  While describing his time in Sault Ste. Marie, based on multiple trips to the area, Bigsby wrote of the “dark woods and dazzling waters,” the ancient Silurian sandstone.

He also provided a picture of how he viewed Sault Ste. Marie in the early 1820s.

Sault Ste. Marie was, according to Bigsby, “a modest settlement” made up of “a straggling line of fifteen log-huts on marshy ground.” Noteworthy features of the village included the North-West Company post, cattle (“in a remarkably good condition”), and even a windmill.

The windmill, built by Ermatinger, was part of “a vain attempt to induce the people to grow wheat” – the climate of the area was not conducive to growing corn, and Ermatinger wanted to encourage more agricultural growth.

Indeed, Bigsby seemed to find the agriculture lacking, particularly as it pertained to food, noting that it was a “peculiarity” to “live almost solely upon white fish morning, noon, and night.”  He consumed so much whitefish during his three weeks in Sault Ste. Marie, he would shudder at the thought of eating it for the decade following his visit.

While he appeared to be less than impressed with the village and its culinary offerings, Bigsby was pleased with at least some of the people. During his time in the Sault, he met not only with the Ermatingers but also with the Johnstons, a prominent fur-trading family. John Johnston, living in Sault Michigan, had a house that Bigsby described as having “neatness” that was “in striking contrast with the careless dilapidation reigning around.”  He also had a formidable library, consisting of a thousand high-quality books in English and French.

Bigsby was critical of “the lower civilization which [characterized]” colonial life. He recommended that those belonging to “easy classes” should visit Canada but not actually move there; only the lower, “uneasy” classes should actually live here.

Bigsby was also critical of and amused with the clothing worn by the Sault Ste. Marie residents. While he declined to comment on women’s clothing apart from saying that it was out-of-date – “although no obsoleteness in dress can hide goodness and intelligence” – he did provide a description of what the men wore. Apparently, the trend was to wear high-waisted coats and pantaloons; the latter were made of leather, with a large number of brass buttons, similar in style to Mexican rancheros.

His account of his time in Sault Ste. Marie also spoke to the portrayal of the Indigenous population. Bigsby praised “the thankful and meek devotedness so universal in Indian women,” while also noting that he had encountered a white woman “who wore a broad silver plate on her head on account of having been scalped.”

Bigsby moved back to England in 1826 or 1827, became involved in local politics, and continued to publish – first, works in the field of geology, and then eventually his memoirs. While his time in North America may have been brief, he left a lasting impression on our knowledge about local fossils… and provided a snapshot of our area in the 1820s.