Do you remember Fort Wosguhaegun?

This week's edition of Remember This reminds us that disappointing attitudes of the time were on display at this expensive tourism attraction, which was rather short-lived
Nov 1, 2020 11:06 AM By: Remember This? 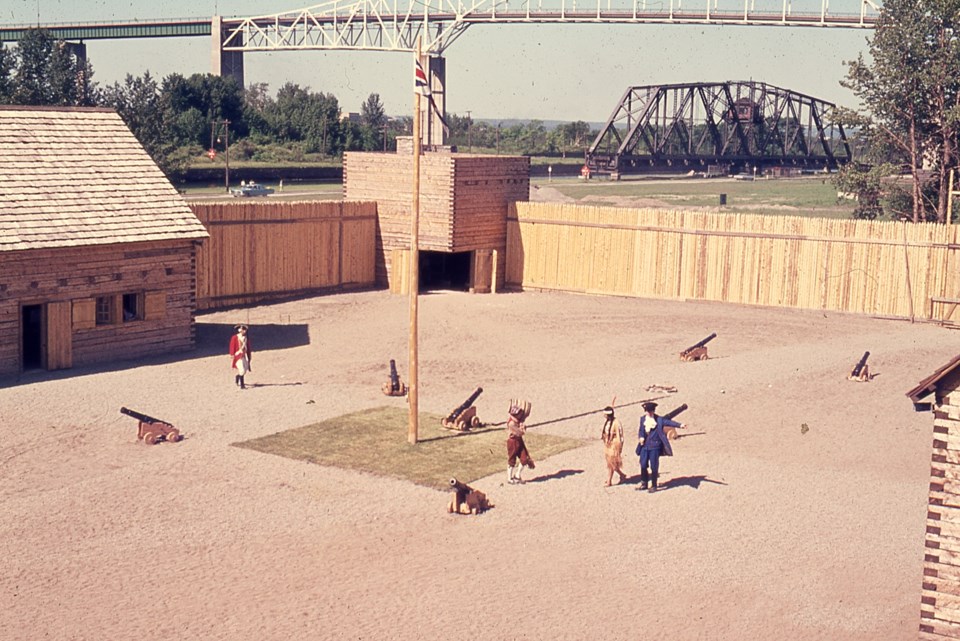 In 1967, people in Sault Ste. Marie could step back in time with the opening of a new tourist attraction.

One newspaper article described Kiwanis Club Historical Site Committee chair Jim Kelleher’s enthusiasm for the project: “He was grinning, rubbing his hands together, bubbling and gleeful. His plans were expansive, entertaining, and almost unreal.”

And it was that enthusiasm that helped the fort to exceed expectations. Despite the naysayers – “no way could I see [the Ontario Development Corporation] putting out money for a bloody trading post” – Fort Wosguhaegun received a $90,000 loan from the ODC, the first tourism industry project to do so.

Fort Wosguhaegun was based on a James Bay trading post known as Fort Albany. Fort Albany, along with Moose Factory and Rupert House, was one of the original trading posts of the Hudson’s Bay Company. Using archaeological research and historical plans as a base, the replica fort was constructed on the Saint Mary’s River, near the locks. The Kiwanis Club opted to name the fort; the Sault Daily Star reported that they chose “wosguhaegun” because it meant “meeting place” in Swampy Cree.

The fort included a blacksmith shop, a small blockhouse where beading demonstrations were held, a general store, and a souvenir shop. The souvenir shop featured work made by indigenous artists, ranging from crafts made on Manitoulin Island to soap stone carvings from the Haida. Also for sale were Scottish berets, St. Joseph Island maple syrup, and coin banks made by Soogoma Industries.

Fort Wosguhaegun also featured a totem pole shop – more relevant to the Indigenous peoples of the Pacific Northwest than the Sault Ste. Marie or James Bay areas. At least some of the totem poles were carved on-site by Ross Jobe. Jobe – perhaps most famous for a famous mounted fish that he claimed grew white fur because of the frigid waters of Lake Superior – had learned how to carve totem poles from the Haida people on the west coast.

The fort also housed artifacts from the time period, supplied by the Royal Ontario Museum, and housed in museums on the western corners of the grounds. Barrel hoops, keys, flasks, furniture, ceramics, tools, weapons, and more could all be found in these museums.

There was even a beaver lodge and pond, which included windows that allowed visitors to watch the beavers in their habitat. Unfortunately, the life of a beaver in a reenactment fort was far from smooth and easy: in September of 1967, one beaver was found “stoned to death” at the bottom of the pond, and another was “abducted.”

The fort was a blast from the past – with the exception of some thoroughly modern electrical outlets and the food at the snack bar.

But Wosguhaegun – and its media coverage – reflected not only life in the 17th Century but also the cultural values of the 1960s. While the newspaper highlighted how “painstakingly” committed the fort was to reenacting history, the descriptions of the fort, which included references to “wild-eyed savages” trying “firewater” said much more about attitudes and biases towards Indigenous peoples in 1967.

Fort Wosguhaegun officially opened on June 17, 1967. Opening ceremonies included a fur trading pageant, which would become a staple at the grounds, and a cannon blast. The latter startled crowds, who were not warned the cannon would be fired, as it “sent a paper projectile right over the gates.”

Fort Wosguhaegun was staffed largely by students, working during their summer breaks. Indigenous roles at the fort were played by local Indigenous people.

The Sault Daily Star discussed the living history aspect of the fort – or, they noted, as teens would word it, “total involvement.”

When Wosguhaegun opened, the Provincial Minister of Tourism and Information, James Auld, was in attendance, declaring that the location was “sure to become a major international tourist attraction.” And it was . . . at first. By July and August of 1967, the fort was seeing 500 or more visitors per day.

However, due to funding issues, Fort Wosguhaegun’s run was short-lived. The living history tourist attraction closed in 1974. The lumber used to build the fort was repurposed and used for the rebuilding of the burned-down Hiawatha Lodge.