Award-winning author inspired by early life in the Sault

This edition of Remember This looks back on the life and accomplishments of Marie McPhedran
Sep 30, 2018 11:00 AM By: Remember This? 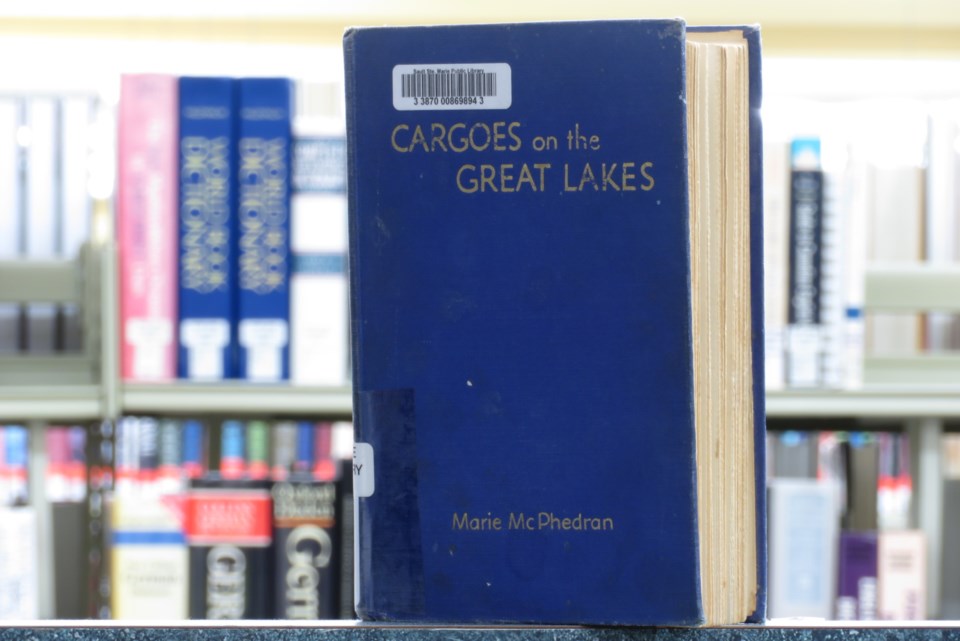 Marie McPhedran's Cargoes on the Great Lakes won the 1952 Governor General's Award for juvenile literature and was inspired by the author's early life in the Sault. Sault Ste. Marie Public Library photo

Sault Ste. Marie boasts connections to many prominent authors: Morley Torgov, Frank Paci, and Margaret Atwood to name a few. One author by the name of Marie McPhedran even won the Governor General’s award for her children’s book — and it was inspired by her time in Northern Ontario.

McPhedran grew up in Sault Ste. Marie in the early 1900s. As a young adult, she showed promise as a writer, so much so that James Curran of the Sault Star offered her a reporting job with his newspaper. Her life, however, took a much different turn.

Her father, Leslie Green, served as the city’s first high school principal and eventually became a school inspector. Marie followed in his footsteps, pursuing a career in education. She studied history at the University of Toronto and briefly worked as a history teacher.

That soon changed when she met and married Gordon Duncan. His career was in mining, working as a director of exploration. She followed him to remote mining locations, and they spent much of their time in the bush in northern Manitoba and Saskatchewan, evaluating prospector sites. For a period, they moved to Flin Flon, Manitoba, at a time when it was inaccessible by road. Marie was one of the first women to live in the community.

This time in the wilderness turned out to be material she would also mine one day, as content for her books.

Unfortunately, shortly into their marriage, Gordon Duncan passed away.  Marie remarried, this time to a prominent doctor from Toronto by the name of Harris McPhedran. Their wedding was covered in a Globe and Mail article from August 1936, with extensive time being devoted to her bridal outfit — namely, “a smart suit of hunter’s green.”  The two lived in Toronto, and it was during this time that Marie’s writing career took off.

Her first novel, Golden North, was geared toward young readers and concerned gold prospecting in Northern Manitoba, a topic which allowed her to draw from personal experience. One Globe and Mail review from 1948 described every page as being filled with “the magic of the north” and praised how true-to-life it felt.

In fact, that use of personal experience seemed to be critical to her writing process: during public lectures, she discussed the importance of writing from an authentic background and having adequate material to draw from.

With her third book, Cargoes on the Great Lakes, she returned to her roots, exploring a fascination with freighters that started as a child as she watched the boat traffic on the St. Marys River.

The book began in Sault Ste. Marie, in the Windsor Park Hotel, with Marie and her nephew, John, watching freighters out the windows. From there, it delved into an exploration of shipping on the Great Lakes – the history, the materials carried, and the nitty-gritty details of life on a freighter. Much of that information, from the vivid details about the food to the terror of experiencing a storm on the lake, stemmed from Marie’s own experiences: she travelled the Great Lakes by freighter for a summer.

While the book Cargoes on the Great Lakes was written for children, the Globe and Mail suggested that it was also suitable for adults, and lauded it as “the only book on the subject.” The book won the 1952 Governor General’s Award for juvenile literature, an honour that celebrated the book’s literary merit.

Marie McPhedran passed away in 1974, but her words have survived to this day.  A copy of her award-winning book, Cargoes on the Great Lakes, is in the Local History collection at the Sault Ste. Marie Public Library.