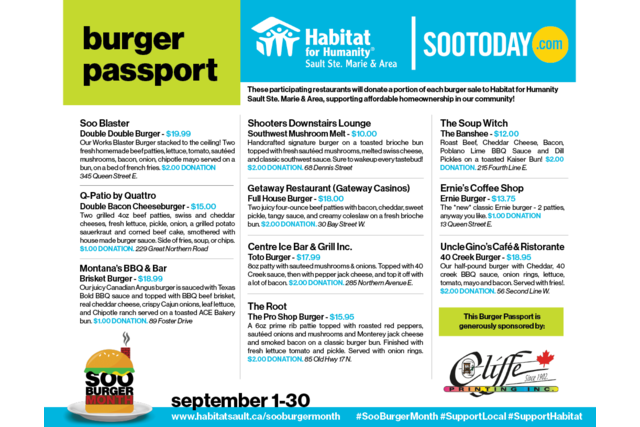 Soo Burger Month, presented by SooToday.com, is a city-wide fundraiser running throughout the month of September.

Using the Burger Passport (sponsored by Cliffe Printing), Habitat will guide you to participating restaurants that are offering a creative new burger (or a tried-and-true one) from which at least $1 will be donated to Habitat for Humanity Sault Ste. Marie & Area per burger sold.

Participating restaurants will compete to win the Best Burger Award (as voted on by customers) and/or the Most Burgers Sold award!

The fundraiser runs from September 1 to September 30, with awards being announced in early October.

While you #SupportLocal and #SupportHabitat this September, take photos of your #SooBurgerMonth adventures and send them our way to be featured in our Burger Gallery!