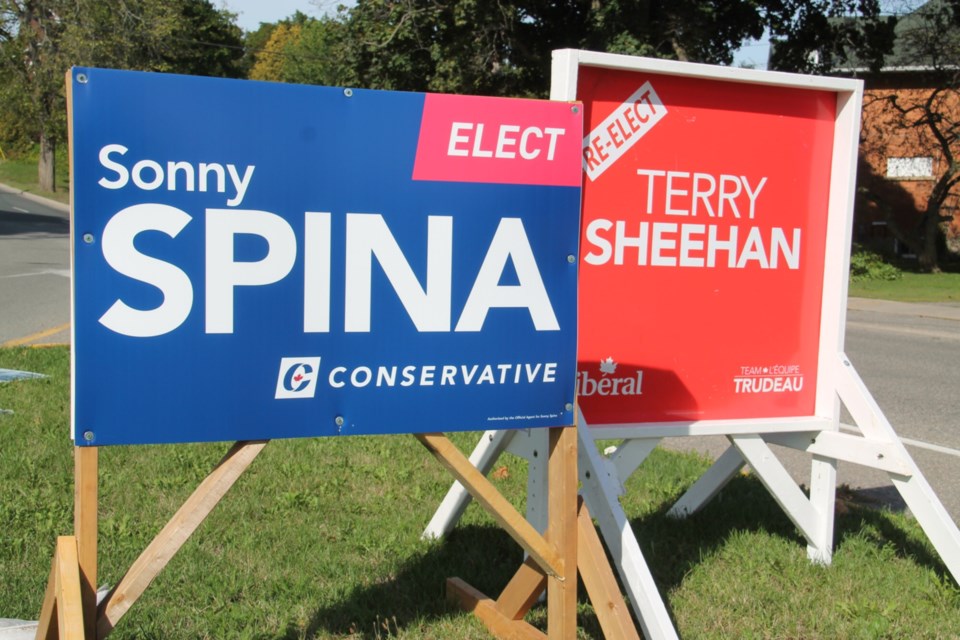 "This is extremely troubling to me," Spina said after being advised about false assertions made about his campaign signs by Hannah, past president of the Sault Ste. Marie Federal Liberal Association.

"Did you notice that Spina, who is a police officer, has his campaign signs out on public property before the writ is officially dropped?," Hannah wrote to SooToday early Wednesday, using his personal email address.

"This is not legal as it is against Election Canada laws. They are off to a criminal start!" he said.

Challenged by SooToday about his interpretations of both the Canada Elections Act and criminal law, Hannah changed his story to say Spina's campaign was actually in violation of the city's signs bylaw, adding that he was just joking about criminality.

He was definitely wrong about the signs.

Elections Canada says nothing in the Canada Elections Act prohibits placement of election signs outside a federal election period.

Hannah says he hasn't been on the federal association board for more than a year.

He's an experienced political operator, also having previously served as president of the local provincial Liberals during much of David Orazietti's time as an MPP and cabinet minister.

"To be clear, I am not the president of the Federal Liberal Association and do not speak for them nor the campaign," he told us.

"I believe that the signs placed on public property prior to the writ is in violation of city bylaws. As such it would be a bylaw infraction and not criminal and that was exaggerated."

"My email comment to you was my humour and personal thoughts and I expect that you would appreciate it simply as such."

Bill C-76, which came into force three months ago, prohibits false statements claiming any election candidate has committed an offence under an act of Parliament.

Earlier this week, CBC/Radio Canada announced it's joining other major news organizations and social media networks in the Trusted News Charter, a global initiative to protect audiences from disinformation during elections and other "moments of jeopardy."

Elections Canada and other federal entities have announced measures to prevent electoral interference and misinformation.

"Mr. Hannah ought to have known that Elections Canada has already commented on this issue stating 'the Canada Elections Act does not prohibit displaying campaign signs outside of a federal election period.'  He should also know what constitutes an offence against the Criminal Code," Spina told SooToday.

"I am very proud of our team of volunteers. They have all been working extremely hard and have conducted themselves professionally."

"I will not allow this behaviour to distract me from my commitment to our community. I will continue working hard to address issues facing the people of Sault Ste. Marie and to fulfil my pledge to make life more affordable for all Canadians."

"Our campaign does not endorse or support the allegation made against Mr. Spina," MacKnight said.

Hannah currently has no involvement in the Sheehan campaign, she added.