For many Canadians, memories of May 2020 may focus on the challenges of the pandemic. For Sault born and raised entrepreneur Matthew St. Pierre, it will remembered as the month he launched his new company, Cube Music Agency
May 20, 2020 4:00 PM By: Chris Belsito 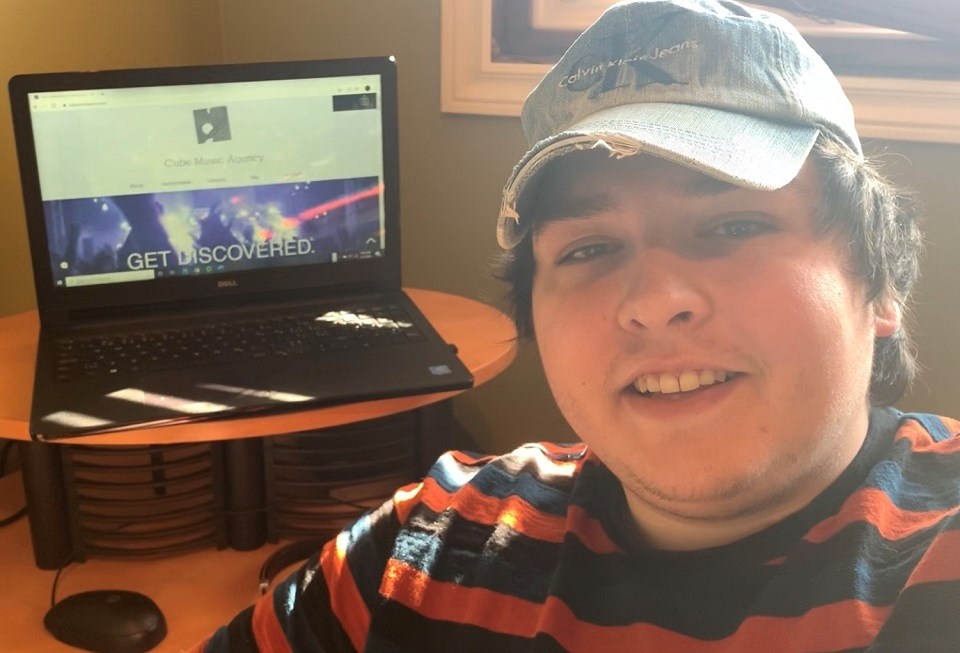 As unlikely as it seems for an entertainment-related company to launch in the middle of a pandemic, in many ways it was the perfect time for Matthew St. Pierre.

The current Barrie resident spoke to us about his new venture from his father’s home in Sault Ste. Marie, where he has been weathering out the pandemic.

“I think this is definitely a good time where an artist can reevaluate what they are doing,” he says. “Music gives us a sense of community. I think right now, the world needs that more than anything else.”

The agency focuses on developing independent musicians and to help them find “ideal” fans through an artist-specific approach.

The seeds of the new company were developed when St. Pierre still lived in the Sault.

“I went to high school at St. Mary’s and was here for most of my life. I had a big interest in music and the music community here is great. I used to be involved in Soo York City [Urban Arts Collective], a great hip hop community, and I had friends that were musicians too.”

One of the key people St. Pierre worked with was his Hamilton-based brother, Jackson Nunes, a musician/producer whose is known on stage as Ecklectic.

“My brother and I never grew up together. We started talking when I was in high school. We connected over music. I didn’t realize he was making music until one day he showed me some of his material. So I kind of pushed him to share his music. That’s when I stepped up to manage him around 2015/16.”

St. Pierre managed him for about two to three years.

“During that time I met a lot of people in the industry and developed good relationships. I learned more about the ins and outs of the music business.”

In 2017, St. Pierre decided to attend Canadore College in North Bay to study advertising and marketing. After graduating, St. Pierre put his two interests together.

“I took what I learned in school and tried to reflect it into music.”

St. Pierre came back to the Sault for the summer and applied for a start-up grant with the Economic Development Corporation and with it started a small, independent record label, Get Rekt Records.

The name of the label came from his brother who had used ‘Get Rekt’ as a brand for a number of years.

“I asked if he was open to us applying for the grant and using his brand for the label. He said, ‘Yes, let’s do it.’ … That allowed me to start dipping my toes into the music industry.”

One of St. Pierre’s personal early successes was the production of a video for Ecklectic’s song All Your Love.

“We had Dan O’ Brien and Ace Productions onboard. We went to Hamilton to shoot the video and we brought a Sault business to do it.”

“We had been in contact with him trying to secure music placements for Ecklectic. In the summer of 2019, Everton invited us for a meeting. He knew my background and my interests. [He] mentioned that Vice was interested in dipping their feet into the water in the music industry, maybe getting into publishing beyond Noisey, their music blog.”

The Vice rep told the young entrepreneur to send any ideas he had to them, an offer St. Pierre took seriously.

“I spent about six to eight months trying to design a pitch for Vice,” he says. “Long story short, it didn’t fit what they were looking to do. It was just too small scale for them.”

As to not to discourage St. Pierre, the Vice team recommended that he get his proposal off the ground and build it to a level where it could be on a B2B [business-to-business] scale that might work for them.

“I am doing just that with the hopes that in the future there might be a partnership opportunity. But at the end of the day, just having that connection is huge.”

The model St. Pierre created was for artists who were not completely comfortable with the business side of the industry.

“There are lots of services that offer playlisting services or music promotion. The real difference with Cube is that it is really tailored to any type of musician, even if you are just starting out or just recorded your first demo. There is a market for all of that.”

St. Pierre noted that many of his competitors will turn down a new artist with a rough demo because they don’t want to tarnish the reputation of their pitch when they target playlists.

“Getting exposure, which is the biggest part for a new artist, you have to make sure their music gets in front of people who are interested in what they do. There are always alternatives for a track. If they don’t fit on a regular Spotify playlist, there might be independent radio or certain blogs interested in them.”

St. Pierre cites the Sault’s Borderline Radio as a great example of an avenue for an up-and-coming Sault artist.

“It is a small online radio station dedicated to artists from our community, whether they are starting out or have years of experience, whether it is something recorded in their studio at home or recorded in a professional studio.”

Although his company is still in its infancy, St. Pierre was overwhelmed with the number of orders that came in.

“It’s unbelievable the number of responses I have received,” he says. “There’s a lot of interest in the entry level packages, which is great for people wanting to try out the service.”

When an artist approaches St. Pierre, he sets up a one-on-one consultation to go over their music and plans.

“We set up a 30 minute meeting to talk about their music. Then I will take a deep dive on their social media, Spotify, iTunes, or Apple Music to see how they are currently performing. I will make my judgement to what I see as the best position to take is on their next release. We’ll see what they are comfortable with in terms of promotion and determine what kind of market they want to penetrate. We want that direct connection. I want to position myself in the industry is as someone who really helps artists.”

And it’s not just the up-and-coming artists that St. Pierre can help.

“I do bigger scale campaigns too. If an artist comes to me with a record label budget, I can develop a social media campaign or promotions. Or I could simply look at their social media to find room for improvement or give advice.”

St. Pierre has many future plans for Cube Music Agency, but he wants to ensure he keeps one specific focus.

“I think long-term I can achieve many of my ideas. But for now, I just want to focus on where I can put myself in the best position to help an artist.

Mining the Sault’s rich musical history (6 photos)
Jun 29, 2020 10:00 AM
Comments
We welcome your feedback and encourage you to share your thoughts. We ask that you be respectful of others and their points of view, refrain from personal attacks and stay on topic. To learn about our commenting policies and how we moderate, please read our Community Guidelines.