Rendell is now part owner of Case’s Music, which has been a fixture of the community’s downtown core since it first opened on Spring Street in the 1990s
Dec 13, 2019 9:15 AM By: Chris Belsito 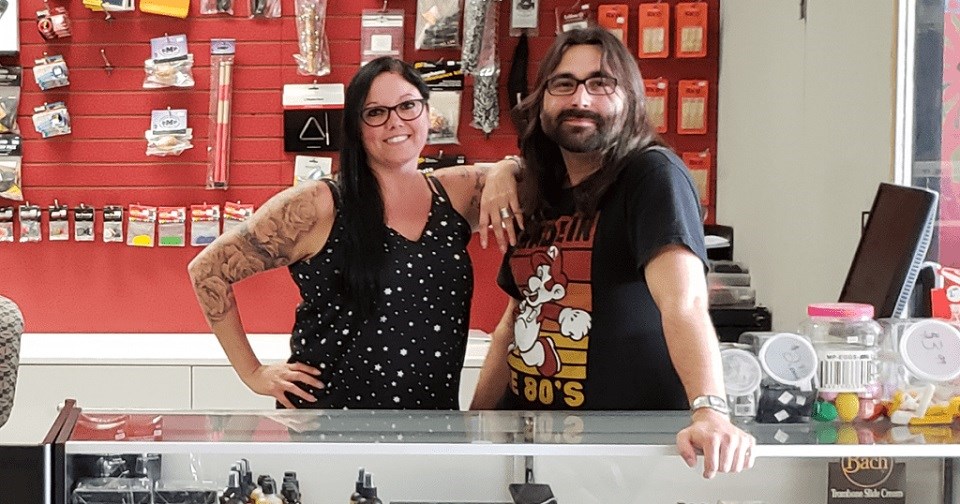 On their website, Case’s Music has the expression “life is music is life is music” at the top of the page.

For owners Carrie Suriano and Jake Rendell, the expression is not hyperbole. It is reality.

“For a lot of people, Mike Case is a household name and he was certainly influential on the Sault music scene. He brought music into a lot of people's lives,” says Jake Rendell.

For its first 15 years, Case’s Music was a place where Mike Case could share his passion and knowledge with his students, ultimately guiding them into becoming performers. Rendell notes that the store was founded even before he himself became a musician.

Rendell’s original role with the store began back in 2012. Fresh out of school, he started Algoma Instrument Repair and rented basement space from Suriano.

It didn’t take long before he started teaching music lessons, began working the front desk, and eventually wound up managing the retail end of the store.

“In September 2017, Carrie and I officially incorporated, and merged Algoma Instrument Repair and Case’s Music together. I'm slowly wearing her down," he laughs.

Despite the change of ownership of the store, Rendell and Suriano have kept Mike Case’s vision for the students and the community intact, and to offer musical training in guitar, bass, piano, mandolin, banjo, drums, violin, and voice.

"Our mindset has always been to help our students reach their own goals,” says Rendell. “If someone wants to be in a play, we work with them on their audition piece to get the part they want. Others want to play in a band, so we connect them with other students to form their own music groups."

Rendell notes that some of Case’s Music current students have recently formed a group that is actively performing around town.

“They host their own concerts three times a year, with a full set list and their own gear, with teachers backing them up,” says Rendell. “As these students grow as musicians, we connect them with the same people that our teachers and other professional musicians use to grow their career in the way that they want."

The store’s move to Queen Street many years ago created opportunities that might not have been available previously.

“We gained a retail space, private teaching offices, and a big repair shop. But at the end of the day, the core values are still the same."

Rendell notes that move also impacted its connection to the community.

"It’s all about community. Being downtown, we get to enjoy some amazing opportunities to engage with that community. We love the amazing events the Downtown Association has been organizing. Our teachers and students pitch in and perform, and we donate to and sponsor local festivals and nonprofits.”

Rendell feels there is collaboration between the business owners on Queen Street. “I don't think that existed when we were just off the beaten path. In Square One, the most fun of the downtown squares in my opinion, we've partnered with Loplops, The Grand Theatre, Jade Yoga, and Main Street for events and our Summer Camps.”

In many ways, Queen Street has become a hub for arts and culture.

“Being in the heart of the Sault, we really get to feel the pulse of the city."

In many regards, Case’s Music is not just a store, but rather a key to that creative hub for musical growth and community building.

"A music store is actually one of the only places in the [music] industry that everyone goes to," says Rendell.

"The common public misconception is that every musician in town knows each other. The fact is that most musicians tend to stay in their own lane, playing with others who play the same kind of music as they do.”

The store has become a gathering place for musicians of all sorts: those who play in bars, classical musicians, luthiers, bedroom rock stars, festival organizers, venue owners and more.

“We get the chance to connect the people we get to know and watch the network grow."

Rendell notes that on any given day, you can find four to five people hanging out, drinking coffee, talking shop or music.

“For a lot of people, going in a guitar store tour becomes a ritual . . . most of the time they aren't even looking to buy anything. Just doing the rounds. It's part of the culture, and I love it."

"We have a small lounge where parents typically wait during lesson time. Every once in a while, we get the opportunity to host small shows in that space,” says Rendell.

“It comfortably sits about 30 people. We've partnered with Nicole Dyble from Dryer Fire, who hosts singer-songwriter shows throughout the winter.”

He notes there have been a few other small shows that are passing through. “It's a nice quiet little place to have a show which especially works well for bands looking to do a little fundraising show, or an EP release."

Students at Case’s also get the opportunity to showcase what they are learning and how much they've grown musically to their families and friends. Some of these showcases are held onsite and other shows are held at local venues.

“We organize three concerts for our students every year. We keep it optional, and it’s very rewarding for those that choose to play.”

Of the store’s 350 students, approximately 160 perform in the organized concerts.

“The next concert is taking place this coming weekend. A lot of organization and preparation goes into these from both the teachers and the students.”

Although Rendell notes that performing in front of people, for the first time or 100th time, can be nerve racking for students, it can be an important part of their musical experience.

“There is a certain amount of validation and achievement that comes with performing on stage. The faces of these kids heading down after they nail the piece they have been working on for a month are absolutely amazing. I think it makes a world of difference for the students, and the parents who often don't get a chance to hear their kids play."

The experience often results in a bond between music teacher and student.

"It is unavoidable. Some of these students have been taking lessons at Case's for a long time. Lots of these kids feel like our family. Our teachers play a part in the kids’ growth. Sometimes that means going to a student's graduation, or just giving them a safe space to talk about life. When you see a person every week for 9 years, they become a big part of your life."

Every once in a while students and teachers even become bandmates later on.

"It sometimes happens, often with students who have taken lessons for a while and are ready to take on a recording project, or play a CD release.”

Rendell notes that some students have returned after heading out to university or exploring the world.

“Mike Mikus and Tianna Legacy are two that come to mind. Mike started with us back in 2010 at around 12 years old. Since then he has put out a couple of albums and been on stage with at least three of us. Tianna wrote some beautiful pieces and had a couple of the teachers record parts with her in our studio. It becomes one of the perks of watching some of these young musicians grow."

The store space also acts as an informal gallery, showcasing visual arts on its walls. “All of our art is actually from local artists. Every once in a while we change them out. Last year, we had a display from Karen Nisbit. This year a lot of our art was actually done by our multi-talented Jeff Gray. We set out to be a hub for all of the arts and it's great having a tiny gallery space that we can do that in."

Case's Music is also home of one of the refurbished pianos, painted by Algoma District School Board students at White Pines Collegiate as a two-day art project in March.

"People play it every day. Sometimes I check the cameras and find someone playing a 3:00 AM. I bring my one-year-old daughter with me to work occasionally, and we usually stop on the way in and out to tickle the ivories. Most of our students enjoy stopping and playing a few tunes. It brings a lot of joy.”

How would Rendell describe his store?

“Absolute chaos in all the right ways. Obviously, there is no mold for creative people. Some folks come in and want to find a sound that they just can't hit. Others want to show off their 28-minute prog piece they’re working on. I had a fellow stop in just to play a short piece on his ocarina for my daughter and I. There are few opportunities to work full time in the music industry without being a rock star. I am fortunate to be able to fix instruments and work with musicians every day and bring music into people's lives in a fun and encouraging way."