New single 'Excess Express' continues in the tradition of some of the band’s most well-loved tunes
Sep 15, 2020 2:03 PM By: Chris Belsito 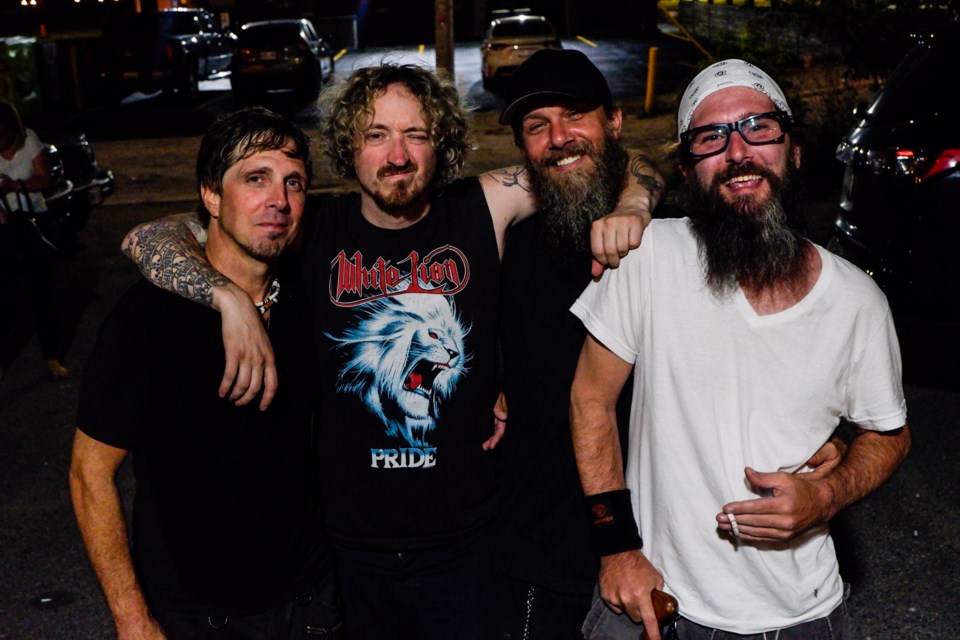 The Inner City Surfers celebrated their 20th anniversary with the band's first show in almost a decade at Loplops on Saturday, Aug. 3, 2019. Donna Hopper/SooToday

Over their career, the Inner City Surfers released a handful of albums and gained a loyal following locally and in southern Ontario by recording and touring heavily.

“Just when you thought 2020 couldn't get any weirder,” starts Mikey Hawdon’s recent announcement about the band on his Facebook page.

“It's been roughly 13 years since the Inner City Surfers released any new music, but on Sept. 23 we'll be releasing a brand new tune, Excess Express.”

This announcement breaks the recording inactivity of the band in recent years.

The Inner City Surfers never broke up, but rather other musical projects, families and life in general got in the way.

In August of last year, the band held a wildly successful reunion show at Loplops.

It was the first time Hawdon, Brad Example, Dave Bahun and Dustin Jones were on stage together in a decade.

That reunion came about after the bandmates had a discussion about the 20-year anniversary of their conception.

It appears that one of those songs will finally see the light of day.

“That whole night was a whirlwind of emotions, so I can’t be sure.”

Drummer Mikey Hawdon says that the reunion gig directly linked to the band’s decision to record the new single.

“We had so much fun getting together for our 20th anniversary gig last year, we all just liked the idea of putting out new music,” he says.

Hawdon says the band’s bass player sent him a rough demo of the song a few years.

“I remember wishing we could have recorded this song for one of our albums. [He] is one of my favourite song writers of all time and this is a classic Brad song. Right up there with Booze n Doobs and Never Ender Bender. I'm glad it's finally going to see the light of day.”

Bass player/singer Brad (Lacell) Example, who currently lives in Atikokan, thinks the timing for a new single is right.

“The landscape has changed so much that we can't tour anyway,” he says. “So this is perfect for us. It looks like we are going to release a couple songs over the coming months.”

Example wrote Excess Express with Dustin Jones back when he was still in the Sault.

The recording was recorded both in studio at Mission Control Studios locally and remotely.

“We had Brad record his vocal and bass tracks up in Atikokan and send it to us,” says Jones.

“Hawdon tracked the drums while he was in town and Dave and I finished off the rest.”

The song had been floating around with the Surfers for a number of years.

“We sat on [that song] for a while,” says Example.

“We did the final recording in pieces. I did some stuff from [Atikokan] and the other guys were in Dustin’s studio for the rest. Dave and Mikey put their magic on it and reshaped it … then a few weeks ago we just decided to put it out and see how it does. We think someone out there will dig it.”

“If you are a Surfers fan who enjoyed songs like Booze n Doobs or Won’t Belong, I think you’ll dig Excess Express,” he says.

“I’m really excited. I think we all are. I think we have all reached a point in our lives where we can look back at what we dedicated our lives to for so long and realize we did some pretty cool stuff and made some pretty cool music together. I think it’s safe to say we definitely have our own sound. It felt good to feel that magic again. It feels the same to me. I hope it feels the same for Surfers’ fans too.”

Guitarist Dave Bahun is excited about the release and feels there is no shortage of inspiration for new songs between the band members.

“It feels great having a new song,” he says.

“If it was up to me, we'd be putting out a new song every month. It's never been easier to record and release music and between the four of us we probably have a few records worth of material. It feels like the band never stopped. The song, the groove and the sonic elements that gave us our 'sound' were all right where they left off.”

“These guys are my best friends. I'll always jump at any opportunity to get together with them, for any reason. The four of us have been through so much and I'm very proud of the music we've created over the years.”

Jones agrees, noting the special kind of magic that making music with the same four guys since high school creates.

“The song absolutely has a Surfers’ vibe. There’s a special something that each individual member of the band adds. It’s a special chemistry. I don’t know where it came from or why that is but I’m just happy it did. Music and bands are funny that way,” says Jones.

Hawdon says the band’s song have a very distinctive sound.

“There's no way you would mistake this song for anyone else. The raspy Brad voice, Dustin's harmonies, Dave picking away on the guitar and me doing whatever I do behind the drums. It definitely sounds like us.”

Although there isn’t a full record coming out at this point, the band hasn’t ruled it out entirely.

“We have recorded a few new tracks and I think the plan is to just release singles at this point but I’m pretty sure we are all in a place where a full length album in the future isn’t out of the question,” says Jones.

Not having live shows is something the band members miss.

“I'm always ready and willing to play together. They're the only ones who ever put up with me, and I know that's true because no one else ever asks me to play with them,” laughs Bahun.

“I miss playing with the Surfers.”

Hawdon is positive there will be an opportunity to play live again in the future.

“It'll give us an excuse to play another gig together and play a brand new song,” he says.

“Maybe we just don't want to be forgotten quite yet.”

Excess Express will be released on Sept. 23.

Follow the Inner City Surfers on Facebook for information about the band and where to hear their new single.