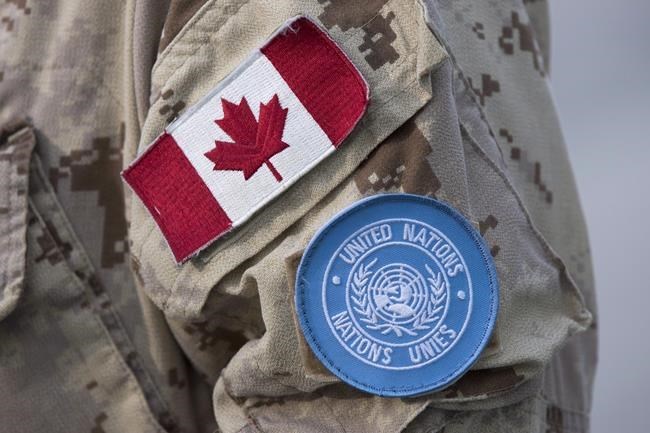 OTTAWA — Canada's contribution to peacekeeping has reached what is believed to be an all-time low, even as the Liberal government makes its final push to secure a coveted seat on the United Nations Security Council.

UN figures show there were 35 Canadian military and police officers deployed on peacekeeping operations at the end of April. That represented the smallest number since at least 1956, according to Walter Dorn, a peacekeeping expert at the Canadian Forces College in Toronto.

The figures are all the more striking given the Liberal government's past promises to contribute up to 600 military members and 150 police officers as part of a broader effort to increase Canada's support to UN peacekeeping.

Canada instead had only 25 Armed Forces members in the field at the end of April, as well as 10 police officers. The military personnel were scattered between UN missions in Mali, South Sudan, the Democratic Republic of Congo, Cyprus and the Middle East. The police officers are all in Mali.

The decline coincides with the COVID-19 pandemic, which has resulted in fewer overseas deployments for the Canadian Armed Forces and the suspension of many activities, including the occasional provision of a transport plane to UN operations in Africa for the time being.

It also comes as the Liberal government heads into the home stretch of its campaign for a UN Security Council seat, where Canada is up against Norway and Ireland for two non-permanent spots at the influential table.

Prime Minister Justin Trudeau has been lobbying fellow leaders in the lead-up to a vote at the General Assembly next month, saying the body will play an especially important role in charting a course for the post-pandemic world.

Yet Canada's bid could be hurt by the fact both Norway and Ireland had more peacekeepers deployed on UN missions at the end of April. Ireland had 474 peacekeepers in the field while Norway had far fewer, but still nearly twice as many as Canada with 65.

"Canada's low level of peacekeeping participation is highly detrimental to our bid for a seat," Dorn said. "In fact, you could call it the Achilles heel of the bid. In its past successful bids, Canada used its then-high level of participation to support the bids."

Dorn said COVID-19 does provide a legitimate reason to pause some military movement and activities, with the UN similarly suspending operations because of the pandemic, but that is not the whole story.

"This Canadian low point is a reflection of Canada's poor position before the crisis began," he said.

Canada had 46 peacekeepers in the field at the end of February, before the pandemic hit the country hard in March.

That represented a dramatic drop from the 167 deployed overseas at the end of February 2019, the high point under the current Liberal government. That was when Canada had a military helicopter detachment deployed in Mali.

Two senior UN peacekeeping officials underscored in an op-ed last month the importance of peacekeeping operations, particularly as COVID-19 presents a new challenge to poor countries in Africa and elsewhere that were already struggling with peace and stability.

"If — or more likely when — the COVID-19 virus further spreads in countries already weakened by war and poverty, it will not only threaten the lives of the thousands, but could also tip the balance from tenuous peace back to conflict and despair," wrote Atul Khare and Jean-Pierre Lacroix.

"To extend the global fight against COVID-19 to areas struggling to emerge from conflict, we need to continue sustaining and promoting peace and stability."

This report by The Canadian Press was first published May 22, 2020.