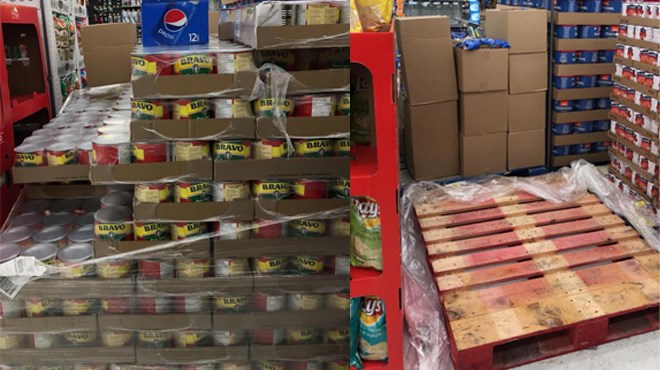 It took less than 24 hours for a pair of Sudbury Giant Tiger locations to sell 10,000 cans of Bravo pasta sauce. (Left) Stephanie Nebonaionoquet-Marsden snapped this photo when there was still plenty of sauce to be had at around 6 p.m. (Right) Tanisha Moranville snapped this photo just two hours later when all of the sauce was gone.

It took less than 24 hours for a pair of Sudbury Giant Tiger locations to sell 10,000 cans of Bravo pasta sauce.

Kraft Canada announced on Nov. 16 that the sauce would make its return to store shelves on Dec. 10, but both the New Sudbury and South End Giant Tiger locations had a shipment of 5,000 cans of the marvelous marinara that they put on their store floors on Nov. 27.

The New Sudbury location was first to see their 5,000 cans of the sumptuous, savoury sauce fly out the door, and there was none of left on the shelves by 7:30 p.m. on Monday.

"I've had phone calls non-stop for about three weeks from people asking when we were getting the sauce in," said Richard McKay, store manager at Giant Tiger in New Sudbury.

"I just put it out on the floor and people started grabbing it. People must have started texting each other and putting the word out on Facebook because it was gone pretty quick."

Once the New Sudbury location was tapped out, employees started directing customers to the South End location, which hung on a little longer to their 5,000 cans of rich, red spaghetti strengthener, but watched the last of it go through the checkout early Tuesday morning.

"I didn't expect it to sell out as fast as it did. I don't think I've ever seen anything like that where we've sold so much of one product in that amount of time," said Paul Brouillette, manager at the South End Giant Tiger.

"Right now I'm just hoping I can get some more in between now and the time it goes in our flyer."

The Sudbury Giant Tiger locations had prepared themselves for the sauce's triumphant return and it will go on sale for 40 cents off the regular price of $1.87 on Dec. 13. Both store managers are hoping to get another shipment of the sauce into their stores in the mean time.

Even with the product selling at regular price, Brouillette anticipated a bit of a blitz and set a limit of 12 cans per customer, which wasn't to much avail in the end.

"Customers were buying it by the case. They'd go through the cash, take it to their car then come back in and buy more," said Brouillette.

The cans of tomato sauce have become something of a phenomenon, and more than 10,000 Canadians signed a petition that was delivered to Kraft Foods, asking for their beloved pasta sauce to be returned to store shelves.

Kraft listened and the sauce is back in Giant Tiger stores around the country, as it is the No. 1 retailer of the pureed perfection, though Sudbury may be able to lay claim to being the most sauce-crazy city in Ontario.

"I don't know what it is to be honest, it doesn't sell as well in stores in southern Ontario as it does up here," said Brouillette. "It seems to be a Northern Ontario thing, whether it's because grandma's recipe calls for it and people tried substituting and it just wasn't the same or what, I'm not sure."

Richard McKay says that the love for the sauce seems to run deeper in Sudbury specifically.

"We're kind of the oddball it seems. I know North Bay put out quite a bit, but not as much as here, same thing with the Espanola store," he said. "We've always done well selling it when it comes on sale, but never like this."

Perhaps Sudburians and Canadians as a whole took the sauce for granted and were gripped with a case of "you don't know what you've got until it's gone" when the 680 mL cans of mashed tomatoes were swiftly ripped from their lives.

"I've heard of cans selling for as much as $25 to $50 online," said Brouillette. "I'd expect sales to level off eventually now that a lot of people have stocked up on it, but I'm definitely hoping to have a lot more in before it goes on sale in a few weeks."