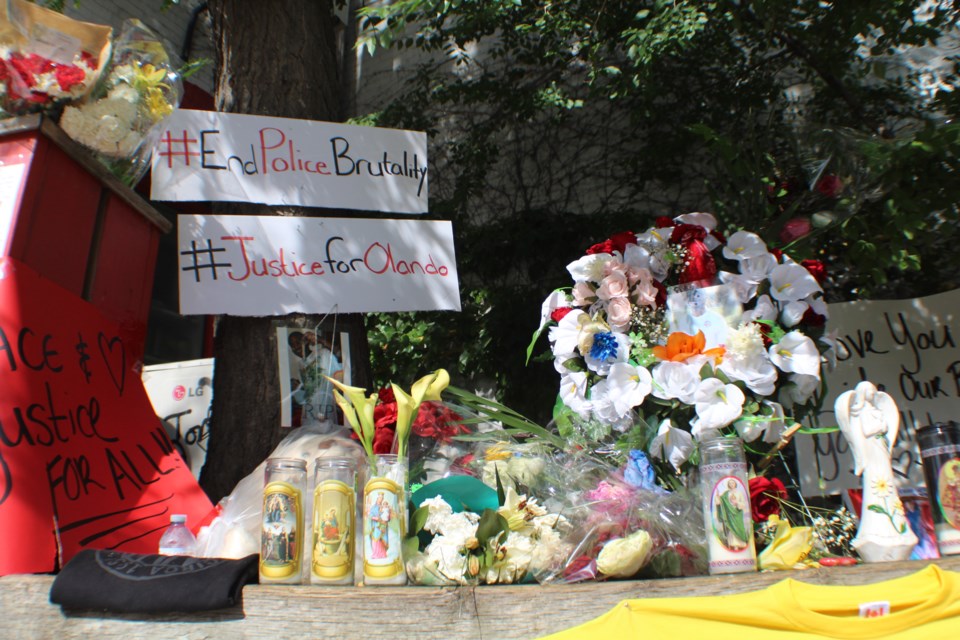 The vigil for Olando Brown in downtown Barrie is shown in this file photo from last summer. Raymond Bowe/BarrieToday

The incident happened June 22, 2018 and made headline news after video surfaced of the arrest at the Five Points.

However, the SIU director Tony Loparco says there are no reasonable grounds for criminal charges.

According to the SIU, at 4:22 p.m. that day, Barrie police informed the SIU of Brown's death while in custody.

Approximately two hours earlier, Brown had been arrested downtown on an outstanding warrant. The SIU says he resisted arrest while officers attempted to place him in handcuffs and a conducted energy weapon (or CEW, commonly known as a Taser) was used "several times" to subdue him. He was taken to Barrie police headquarters on Sperling Drive.

"Simcoe (County) paramedics were summoned and removed the CEW probes from the complainant’s left shoulder blade," the SIU report says, adding this was captured on video. "The complainant’s vital signs were checked by the paramedics both before and after the probes were removed and he was found to be in good health."

Brown was then taken to another room for a strip search, in the company of two police officers. To protect his privacy, the SIU says the video recording equipment in the breathalyzer room was disabled as the camera was covered by one of the officers, which is in compliance with Barrie police policy for strip searches, while the audio continued to record the search.

The SIU says he "suddenly" removed one or more objects from his rectal area and placed them in his mouth.

"The two police officers immediately tried to get the complainant to remove the items from his mouth, but were unsuccessful," states the report. "Within minutes, the complainant went into medical distress."

The police officers immediately began CPR and the paramedics, who were still in the parking lot, were again summoned and responded to the booking area, where they found Brown without vital signs.

The two paramedics returned to find Brown lying on the floor with several police officers working on him and an automated external defibrillator (AED) present. Paramedics inserted a breathing tube into Brown's airway, but they were unable to ventilate him. They then attempted the insertion of a larger breathing tube, capable of going deeper into the airway, but it too was unsuccessful, leading to him beginning to vomit, according to the report. The paramedics described the vomit as a white liquid with blood in it.

The paramedics then used suction to attempt to dislodge whatever was blocking the his airway, but that too was unsuccessful.

Brown was then transferred to a stretcher and transported to hospital, where paramedics saw a registered respiratory therapist use a set of forceps to remove two balloons from his throat, the first of which was described as being intact and roughly the size of a golf ball, while the second was torn and seen to contain a white powdery substance,the report states.

After some time spent trying to resuscitate him, Brown was pronounced dead.

According to analysis on July 6, 2018 by Health Canada, the bags contained heroin, fentanyl, caffeine and dimethylsulphone, which is also known as methylsulfonylmethane and is used to reduce pain, inflammation and allergic reactions, while also having wound healing, dermatologic and exercise performance-enhancing effects.

The SIU says the drugs did not factor into his death.

The pathologist concluded that the cause of death was attributed to "airway obstruction by a foreign body,” namely the plastic balled objects located in his trachea at the time of his death.

A civilian witness and the victim of the alleged assault for which Brown was arrested indicated he had told her that he did not want to go back to jail and that he would kill himself rather than doing so, the report states.

The SIU says it's unclear whether Brown intended to cause his own death, or whether he was simply attempting to dispose of the drugs so he would not face further charges.

The total discharge time was 21 seconds.

"I did take particular note, however, of the evidence of an independent civilian witness No. 3 that she observed the arrest of the complainant, and that he was, in fact, resisting, and she saw no excessive use of force exercised by any police officer during the arrest," Loparco says in his decision.

Following a post-mortem examination on June 25, 2018, the forensic pathologist found there was "no direct link" that Brown's death was caused from being Tasered.

"In the final analysis, there is no doubt that the complainant, for whatever reason, decided to voluntarily ingest the two packages of narcotics that he had secreted on his person, and that he thereby caused his own death, whether intentional or not," Loparco added.

For their case, which involved three subject officers, the SIU interviewed seven civilian witnesses and five witness officers in their investigation as well as two police employee witnesses.

The SIU investigates reports involving police where there has been death, serious injury or allegations of sexual assault.

SIU's transcribed audio and summary of events from the breathalyzer room:

At zero seconds, the recording begins and is showing the interior view of the breath technician room from four various angles. Ten seconds later, the complainant enters the room accompanied by Subject Officers No. 2 and 3. No. 2 is dressed in a Barrie police uniform and No. 3 is in plain clothes. Brown is dressed in dark pants and a T-shirt, has no visible injuries, and is not handcuffed.

At 22 seconds into the recording, No. 2 covers the camera inside the breathalyzer room, preventing the camera from actively capturing any video recordings, while the audio continues to record. At 30 seconds into the recording, No. 3 tells Brown, “I’ll tell you what clothing item to take off. I don’t want no funny business. Any funny business and you’re going on the ground.” No. 3 then continues, “Now slowly undo pants at front. Undo button and zipper, pull them down.”

At six minutes and 40 seconds into the recording, an unidentified voice is heard to say, “Spit it out (first name of complainant), you’re going to die.” The requests for Brown to dispose of the substance he placed into his mouth are then repeated.

At seven minutes and 56 seconds into the recording an unknown voice is heard to say, “Want to bring him in hall where there’s more room?”

At 10 minutes and 26 seconds, an unidentified voice asks, “Is he breathing?” Another voice responds, “No, he’s not breathing” and then, “Keep going, keep going, AED (automated external defibrillator) in hallway.”

At 11 minutes and 48 seconds, a computer-generated voice (believed to be the AED) says “Analyzing, no shock advised.” Then a tone that varies in pitch continues for several minutes, and an unidentified voice says, “We’re doing compressions.”

At 20 minutes into the recording, a transmission is heard from a radio device (believed to be EMS) indicating the address of the police station and “VSA male.”

At 38 minutes and 57 seconds the recording stops.

About the Author: Raymond Bowe