Sudbury's science centre has some ambitious plans for the next few years
Apr 25, 2018 1:18 PM By: Sudbury.com Staff 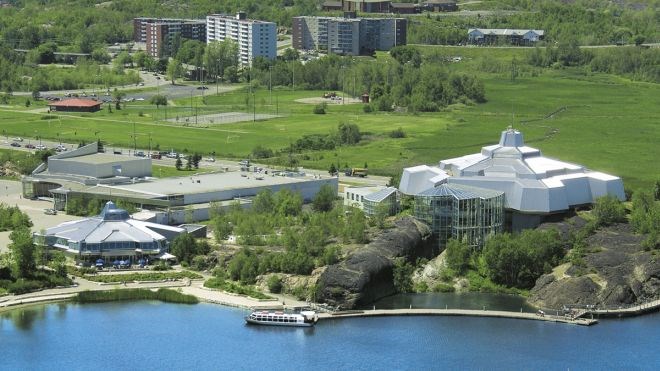 Science North’s growth of programs and activities throughout all of Northern Ontario received significant support with a $16 million funding package from the Ontario government. (File)

SUDBURY — Science North’s growth of programs and activities throughout all of Northern Ontario received significant support with a $16-million funding package from the Ontario government.

What's being called in a press release a “historic level of funding” for the science centre was announced Wednesday by Sudbury MPP and Minister of Energy Glenn Thibeault.

The funding will be instrumental for Science North to deliver on the five key strategic priorities and 15 goals in its recently launched 2018-2023 Strategic Plan, the press release said, a plan the science centre's CEO, Guy Labine, called "bold" when it was unveiled in March.

The funding will support the creation of new science experiences that will engage and inspire audiences at Science North, Dynamic Earth and in communities across Northern Ontario.

The funding, the province said, will also support a significant expansion of programming and services in northwestern Ontario, boasting the implementation of these projects will create jobs and inject more than $27 million in economic benefits to the North.

The benefits will be long lasting as renewed experiences will drive tourism, attract new audiences, encourage repeat visitation and extend travellers’ length of stay in communities across Northern Ontario.

A strong partnership network across the North will grow tourism and provide educational science experiences to underserved regions and First Nation communities, including many remote communities.

“Science North has added so much to our community in its first 34 years, far beyond what was originally imagined,” said Thibeault.

“It has become a community gathering place, an iconic symbol of our city, and a living testament to our past and our future. Today’s announcement will ensure that Science North continues to play its vital role in our community, as we look forward to the next 34 years.”

“This amazing news will catapult Science North to achieve its vision of being the leader in providing inspirational, educational and entertaining science experiences over the next five years,” said Scott Lund, chair of Science North's board.

“This is wonderful news for our audiences throughout the North, in our community and at Science North and Dynamic Earth,” said Science North CEO Guy Labine.

The new Vale Chasm show will transport visitors on a seasonal journey to experience Northern Ontario’s dramatic natural landscapes, people, iconic creatures and signature sites. A customized version of the experience will be installed in other attractions in Northern Ontario, helping build tourism capacity in the North.

The THINK Project is a major renewal of 50 per cent of the science centre’s fourth level. Visitors and Bluecoats will come together to tinker, hack, innovate, network and know. THINK Hubs in six communities across Northern Ontario will attract new audiences, drive repeat visitation and increase memberships at those attractions.

Two new Object Theatre multimedia experiences will immerse visitors in current science topics including the challenges and opportunities of climate change and the mysteries of the universe, highlighting dark matter research projects at the world-class SNOLAB near Sudbury.

The Go Deeper project will expand the underground experience at Dynamic Earth to create new drifts that showcase modern mining and innovation, a new underground theatre and multipurpose space, and new exhibit experiences.

Science North will expand its reach across the North through increased delivery and impact of science experiences across Northwestern Ontario. The expansion of the Thunder Bay office will benefit 200,000 people living in Northern Ontario and thousands of people who come to the region as tourists.

The new Outdoor Pavilion on the grounds of Science North will open in June 2019 to celebrate Science North’s 35th Anniversary. The new pavilion will support expanded programming and generate revenue from functions and events to support Science North’s financial sustainability.

Capital upgrades will create impressive surroundings for visitors to Science North and Dynamic Earth. Visitors will be welcomed by an iconic and engaging new experience in the Science North lobby and enhanced grounds at both sites.

A new signature IMAX 3D film will be produced by Science North in partnership with Dr. Jane Goodall. Remarkable success stories in animal conservation will inspire audiences around the world and instill hope for our future. The film’s production will build on the capacity of Northern Ontario’s film industry, sustaining the industry for long term prosperity.