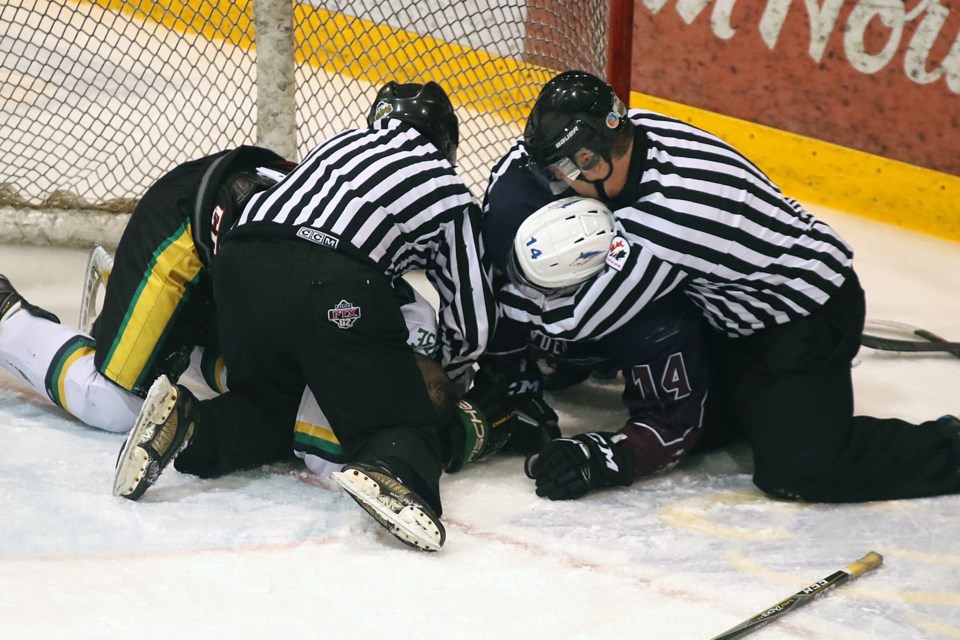 Tensions spilled over from a chippy contest between the Thunder Bay North Stars and Dryden Ice Dogs on Tuesday, April 17, 2018. (Leith Dunick, tbnewswatch.com)

THUNDER BAY – Police have confirmed they are investigating an alleged assault that took place Tuesday night at Fort William Gardens.

Thunder Bay Police were called to the rink after an off-ice altercation between the Thunder Bay North Stars and Dryden Ice Dogs, following Thunder Bay’s 2-1 win in Game 3 of their Superior International Junior Hockey League final.

The league on Wednesday announced that North Stars forward Avery Siau, along with Ice Dogs defenceman Carson Lux and forward Matthew Pitchenese have each been suspended indefinitely.

BEYOND LOCAL: What you need to know before taking the plunge into a new career
Jan 17, 2020 8:55 PM
Comments
We welcome your feedback and encourage you to share your thoughts on this story. We ask that you be respectful of others and their points of view, refrain from personal attacks and stay on topic. To learn about our commenting policies and how we moderate, please read our Community Guidelines.

A proud Nova Scotian who has called Thunder Bay home since 2002, Leith has been the editor of Thunder Bay Source for 17 years and has served a similar role with TBNewsWatch.com since 2009. Twitter: @LeithDunick
Read more