ONTARIO: This four-year-old hockey player is unwittingly warming hearts around the world 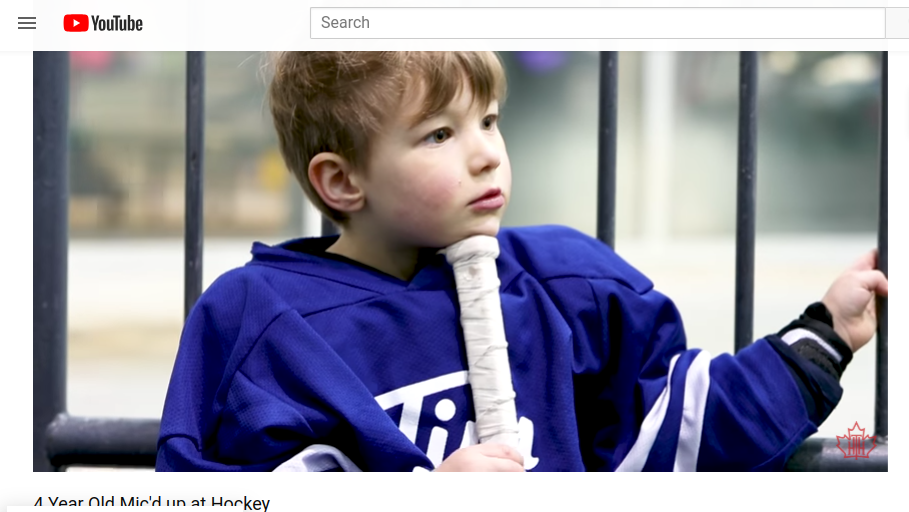 Mason Rupke, 4, has become a global sensation after his dad mic'd him up for a Timbits Hockey session at Rotary Place.
A four-year-old Orillia boy may be the most popular person on the planet today.

Mason Rupke, the unwitting star of a video that has gone viral globally, is the smiling face of all that’s good and right about hockey.

His dad, Jeremy, known in social media circles as Coach Jeremy, decided to put a microphone on his son as he participated in his weekly Timbits Hockey mighty mytes session at Rotary Place in Orillia earlier this month.

“I would watch him in practices and I would see him talking to himself, or saying something to other kids or his coaches and I just kind of wondered what he was saying,” said Jeremy Rupke.

Rupke is well known for his hockey instructional videos; he has a good camera and microphones and knowledge about making videos. So, he decided to mic up his boy.

And the result is golden.

Mason, like most kids his age, is at times laser-focused on the on-ice drills, then rolling on the ice talking to himself, telling his dad he has to pee (he doesn’t, his dad says) and dreaming of an after-hockey trip to McDonald's or ‘badonalds’ as he calls it.

It is both hilarious and heart-warming. And popular.

The full six-minute video has been viewed on YouTube more than 1.4 million times.

But, the phenomenon found its legs on Twitter after Coach Jeremy Tweeted a 26-second clip, saying ‘I mic’d up my four-year-old at Timbits Hockey so I could finally understand what the heck he was doing out there. It was .. interesting.’

His rather innocent post on Twitter has now been shared by dozens of high-profile people such as TSN’s Bob McKenzie, ESPN, NBC and a host of others. The clip has been viewed more than 2.5 million times on Twitter.

“I thought it would be popular … maybe it would get a million YouTube views in six months,” laughed Jeremy. “It’s a cute video and people really love it. It’s melting a lot of hearts.”

And that brings a smile to Jeremy’s face.

“I just want to share my love of hockey with people … and I think this kinda does that,” he said.

It’s a video, he noted, that will resonate with any parent or coach.

As Mason scrambles around the ice at one point, he says, to no-one in particular, “let’s nap!” Later, he says, “My legs are tired” and then, after a burst of energy, seems amazed at his ‘flap-shot’ and engages in a ‘sword fight’ using hockey sticks with one of his fellow skaters.

“I told him this morning that a million people had watched the video,” said the proud dad. “He said, ‘OK. Let’s play.’”

And that is what Jeremy wants to see: kids with a desire to play.

When he quit playing hockey, he turned to coaching in 2009 while living in Huntsville. But after scouring the Internet, he could not find any teaching videos that caught his fancy. So, he decided to make his own.

Many of them have become popular over the years, but none has ever come close to this one.

“I have had NBC and ESPN calling, wanting to use the video,” said Jeremy, whose family moved to Orillia last summer. “It’s crazy.”

While he’s gratified that people like the video, he’s most gratified by the positive comments the posts have generated.

“It’s all been really positive and has really been people just expressing love - love for hockey and kids,” he said.

Mason, too, has expressed love in his own way.

After he scored a goal during the Feb. 15 practice his dad taped, the first thing he did was look for his dad.

“Yay. I scored daddy,” he says with a big smile.

While he loves the game, like most youngsters, he also loves McDonalds. Several times during the video, he asks his dad if they are going to “badonalds” after the practice.

And at the end of the video, the precocious boy says, simply, and in a heart-felt way: “Dad. I love you so much.”

And, yes, Jeremy did take Mason to McDonalds afterwards.

“He had a McNugget meal .. and he liked the toy,” Jeremy said.

BEYOND LOCAL: Exercise comparable to caffeine in boosting working memory, study says
Jan 18, 2020 9:25 AM
Comments
We welcome your feedback and encourage you to share your thoughts on this story. We ask that you be respectful of others and their points of view, refrain from personal attacks and stay on topic. To learn about our commenting policies and how we moderate, please read our Community Guidelines.