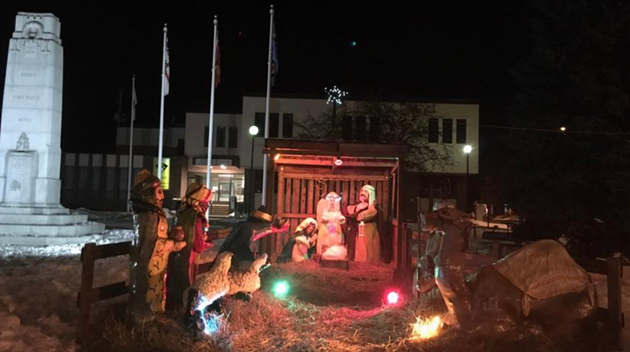 Last week, it was reported by media outlets across Canada that a small figurine of baby Jesus was stolen from a Nativity scene in downtown Renfrew.

The figurine, fibreglass over papier-mache, weighing about 15 pounds and wrapped in a white garment, was believed to be stolen during the Renfrew Santa Claus Parade or later Saturday night, Dec. 1.

The Renfrew OPP have stated that early Wednesday morning, the figurine was found in the parking lot adjacent to the Renfrew Town Hall by a town employee, Tom Webster, now nicknamed 'The Wise Man' for finding Jesus.

"The figurine was not damaged and will be returned to the Nativity Scene in downtown Renfrew," said Cst. Janice Sawbridge. "The organizers of the scene advise they will be implementing security measures to prevent future thefts."

"We're so happy to have him back," said Diana Wakely, Artistic Director of the 'Put Christ back in Christmas Committee.'

Wakely said that Jesus has been better secured in the crib so that he cannot be taken again.

Wakely said the theft made many in the town upset.

"It was disturbing that it should happen, but I had true faith that it was going to be returned. It's a small town. I had faith that someone would bring it back. It's fibreglass and not easily destroyed. He's a sturdy little boy."

Wakely won't call it vandalism, just "somebody being smart" and not a reflection on their community. "We're calling it Renfrew's Christmas miracle."

She laughs and adds, "Maybe somebody just needed a cuddle from Jesus."

CANADA: Police move to clear rail blockade on Tyendinaga Mohawk Territory
Feb 24, 2020 10:50 AM
Comments
We welcome your feedback and encourage you to share your thoughts on this story. We ask that you be respectful of others and their points of view, refrain from personal attacks and stay on topic. To learn about our commenting policies and how we moderate, please read our Community Guidelines.