ONTARIO: Somebody REALLY doesn't like this Sudbury city councillor 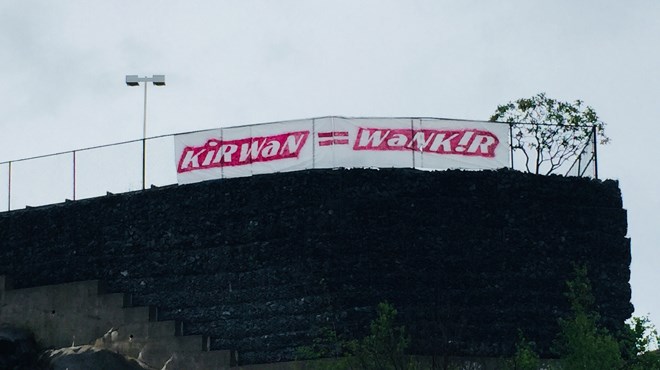 Ward 5 Coun. Robert Kirwan's detractors have taken to the streets to air their grievances with the councillor, hanging a large sign in the Silver Hills area, overlooking the Kingsway. (Photo: Nick Liard)

SUDBURY — Ward 5 Coun. Robert Kirwan has been in the eye of the storm when it comes to debate surrounding the Kingsway Entertainment District.

The councillor was one of, if not the most, vocal supporter of building an arena and entertainment complex on the Kingsway, and he has come under fire for it online, during council meetings, and even in a one on one debate with Sudbury Green Party candidate David Robinson.

His detractors have now taken to the streets to air their grievances with Kirwan, hanging a large sign in the Silver Hills area, overlooking the Kingsway.

Kirwan says he's not phased by his critics, but says it does bother him that people are so opposed to council trying to move things forward with large projects.

"For whatever reason I guess I've become the face of the Kingsway, seems like I'm the easy target for it, but that doesn't bother me," said Kirwan.

"I guess I get a little bit upset that we've got so much that this council has finally decided to do instead of passing things off and yet it's being so strongly opposed. There's going to be a lot of collateral damage because of the delay."

Greater Sudbury Police say that they didn't receive any calls in relation to the sign being hung on the Kingsway, and apart from Kirwan, no city staff have responded to the act.

"Obviously they're trying to use some kind of tactic to discredit everything that the Kingsway stands for, but I guess that's what you get for sitting on council," said Kirwan.

The Ward 5 councillor announced in May that he will be running for reelection in this October's municipal election.