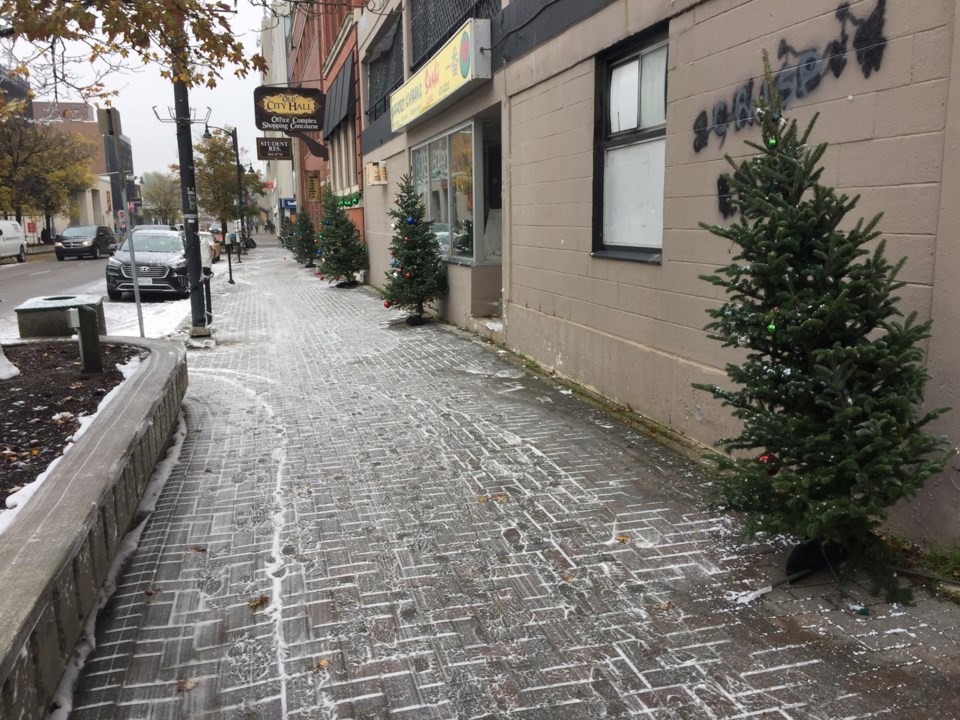 Fake snow is seen here being used in a movie production in downtown Sudbury in October. (Heidi Ulrichsen/Sudbury.com)

SUDBURY - Following a decision this week by North Bay to ban a chemical used to make fake snow for film productions, Greater Sudbury has halted the use of the substance while it investigates.

Meredith Armstrong, the city's acting director of economic development, said Wednesday they are investigating issues around Phos-Chek, a fire-retardant foam used to simulate snow in the movies.

“We don't foresee a ban on any of these substances,” Armstrong said. “And as long as we have the time to do the proper review of the health and safety and the risks ... I don't foresee any long-term issues at this point.”

A story by Chris Dawson of BayToday.ca quoted Mark Campbell, an official with Perimeter Solutions, which makes Phos-Chek, as saying the product is under strict guidelines and has been tested in a number of ways, including toxicity relating to mammals, aquatic wildlife, and product biogradability.

“While there are slight variations between some of the results obtained by testing on different products on the list, all products meet the environmental acceptance standards jointly agreed to by U.S. and Canadian authorities,” Campbell said in the story.

A special effects expert quoted in the story says the foam for movies is a heavily diluted form of Phos-Chek that doesn't pose environmental dangers.

“Over several years of using this same product that is used across Canada to help fight forest fires and airport fires, we have never encountered any issue,” Luc Benning said. “It has been our knowledge that Phos-Chek WD-881 is the most biodegradable and meets the highest environmental standards both in the United States and Canada, meeting both the USFDA and MNR requirements.”

However, North Bay staff have stood by their decision, saying it was “based on available toxicological and ecological information.”

Armstrong said Greater Sudbury's current film bylaw is due to expire in 2020, so a review was already planned. Fake snow is a big part of the Hallmark Christmas movies that are filmed around this time of year in the North.

“So now we have a better understanding of the different moving parts involved in making a movie, and fake snow is a really important component,” she said. “What this means is this is a good a good opportunity for us, because we're already on an ongoing basis reviewing guidelines and best practices for working with the film industry.”

Film productions are asked to outline the use of chemicals they plan to use, and provide a fact sheet and safety data sheet outlining what's in them and their potential effects.

“Productions are very good at providing us with” those details, she said. “So, you know, when we heard that there were issues, we did ask productions to to bear with us as we temporarily put a halt to the use while we took a closer look at the effects and all of that.”

The city will be consulting with other cities in the North, and in southern Ontario where the industry has been active for much longer, Armstrong said.

“We'll also look at the manufacturer's information relating to the product itself,” she said. “But you also have to make sure you are understanding it in the film context.”

The fact the product is diluted means Phos-Chek used on films is in different concentrations than when it's use to fight fires, she said.

“So we're making sure that the materials data information is also reviewed in the proper context of how it's used, and when and where and how it's cleaned up,” Armstrong said. “So we're working with the (other) cities, some safety staff and our risk management team, as well as reaching out to colleagues in the industry and across the North to make sure that we're all kind of singing from the same song sheet.”

They have been in contact with productions planning to shoot in Sudbury about the fake snow, and she said none have said halting Phos-Chek use will be a problem.

In 2017, 18 film productions were shot locally, with $18 million in local spending as a result. For this year, Armstrong said there will be about 12 to 15 productions, with local spending expected to hit $25 million. The 2018 figure is higher because one of the film shoots is a multi-episode production, but is counted as only one shoot.

CANADA: Bilingualism on the rise among children
Jan 25, 2020 9:25 AM
Comments
We welcome your feedback and encourage you to share your thoughts on this story. We ask that you be respectful of others and their points of view, refrain from personal attacks and stay on topic. To learn about our commenting policies and how we moderate, please read our Community Guidelines.